Infra.Market: Getting back into the saddle

A sudden crisis earlier this year almost devoured the horsepower of Infra.Market. Now it's trying to get back to the racing track 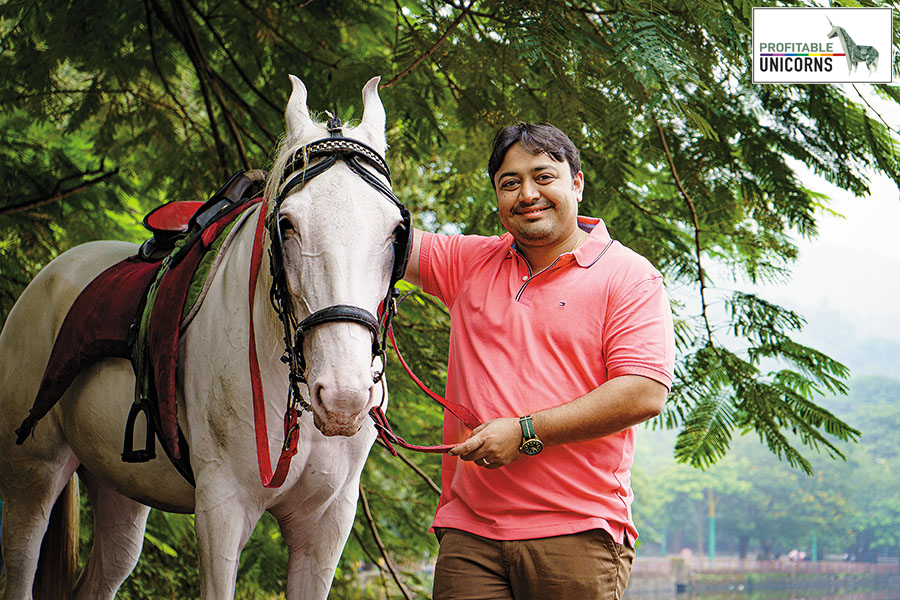 Mumbai, March 20, 2022 It was Sunday, a day after Holi. Hue dregs of all kinds—orange, red, yellow, green—were still splashed on the floor. Aaditya Sharda, though, could spot only one colour: Black. The co-founder of Infra.Market, a B2B online (business-to-business) infra procurement unicorn valued at $2.5 billion, was jolted out of his sleep when the Central Board of Direct Taxes (CBDT) issued a media release around noon. A large number of incriminating evidences were seized during a search operation conducted by the Income Tax (IT) department, underlined the press document. “Evidences revealed that the group has booked bogus purchases, made huge unaccounted cash expenditure and obtained accommodation entries, aggregating to the tune of over ₹400 crore,” it alleged.

For six-year-old Infra.Market, this was the most stressful moment in its short-yet-spirited race to glory. Started in July 2016, the bootstrapped venture picked up its first funding of $3.5 million at a valuation of $15 million in June 2019. Six months later, a round of $20 million resulted in an over five-fold jump in valuation. Sharda’s venture, co-founded with Souvik Sengupta, started getting loaded with more VC (venture capital) dollars over the next 12 months—$20 million, $100 million and $125 million in December 2020, February 2021 and August 2021, respectively.

The valuation matched the pace and soared during the same period: $180 million, $1 billion and $2.5 billion. The co-founders managed the stress of lofty valuation and the load of investors’ expectations by churning out brisk-yet-profitable growth. While revenue from operations leapfrogged from ₹12.54 crore in FY17 to ₹1,242.93 crore, profit surged from ₹28 lakh to ₹35.95 crore during the same period. Sharda kept on taking bold bets and the dice kept rolling in his favour. “Risk toh Superman bhi leta hai. Main toh sirf salesman hoon (Even Superman takes risks. I just happen to be a salesman),” he told Forbes India last year. 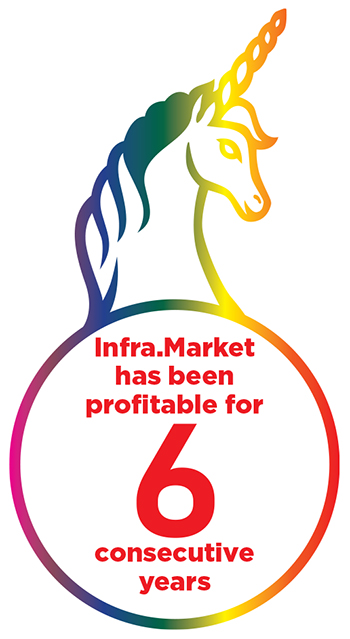 In March this year, the Superman felt like a layman. “We came under intense gaze and scrutiny,” says Sharda, adding that Infra.Market was not the first startup or company in India to face income tax or GST queries. What made the situation precarious was the unicorn tag. Call it the flip side of being a unicorn, if good news gets exaggerated, funding reports get disproportionate footage, then the bad ones are equally blown out of proportion, he quips. “Unicorns have to live with extremes,” he says with a sigh.

“Since March, we have been cooperating with the income tax authorities,” says Sengupta, co-founder of Infra.Market. The company, he adds, has provided all the necessary documents to solve their questions and observations, and to ensure the successful closure of the search proceedings.

For Infra.Market, it was a near-death experience. Suddenly, it became a pariah. The allegations of ‘shell companies’ and getting foreign funding via Mauritius route were devastating. For a company that posted a five-fold jump in revenue and over three times leap in profit in FY22—₹6,231.14 crore and ₹341.21 crore, respectively—suddenly the road seemed to have hit a dead end. “Bankers panicked, partners developed cold feet and the backers frantically looked for answers,” says one of the VCs requesting anonymity. All the stakeholders were at a loss. The only bright light was the way the co-founders handled the stress and continued with the work, he adds.

Also read: Investors Call It The 'Amazon Of Construction'. Meet The Builders Of Infra.Market, The Now $2.5 Billion Behemoth

Sharda, for his part, concedes that the pressure was immense. “But this is what entrepreneurs also have to do. We need to learn to handle pressure,” he underlines, adding two sets of issues he faced after the tax raids. It wasn’t a challenge to cooperate with the tax authorities and share all the required information, he underlines. “The big task was how to handle the perception which suddenly changed,” he confesses. From employees to investors to financers, the news was out in the open and everybody was free to interpret it the way they wanted. 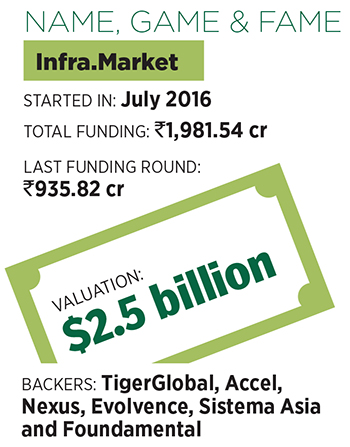 The backers, meanwhile, have instilled confidence in the operations of the co-founders. “You need the right kind of entrepreneurs and people on board to navigate tough times,” reckons Prashant Prakash, founding partner of Accel. The company has continued to grow. In January, it picked up a 24 percent stake in Shalimar Paints, underlining its intention to broaden its play in the infrastructure market. Till last fiscal, private labels made up around 60 percent of the revenue of Infra.Market, which has its own branded concrete, aggregates, walling solutions, construction chemicals, bath fittings and sanitary tiles.

Prakash reckons what has worked for the startup is its unrelenting focus on buyer stickiness. Infra.Market has two parts to its business: B2B, which has big infrastructure and real estate players as consumers, and a business to retail (B2R), which has SMEs, small contractors and vendors. Customer stickiness, he lets on, comes with a trust in the brand and a presence in several categories. “In some sense, they are an infra conglomerate, having multiple private label brands,” he says.

Also read: Meet all the 42 unicorns born in 2021, the highest ever for any year

Commenting on an unending streak of posting profit by Infra.Market, the VC points out the inherent value of B2B enterprises. In general, B2B companies don’t require a lot of customer acquisition cost. If they are full stack, have their own branded products, and are not in the trading business, they are quite capable of generating profits even during the start of their journey. And unlike consumer companies, which can take seven to eight years to get profitable, B2B counterparts can post profits very quickly. “That’s what we have seen in companies like Infra.Market,” he says. The company has built its own product stack, has gone deep in terms of the back-end integration, has taken control of the supply chain, and has been generating nice margins. 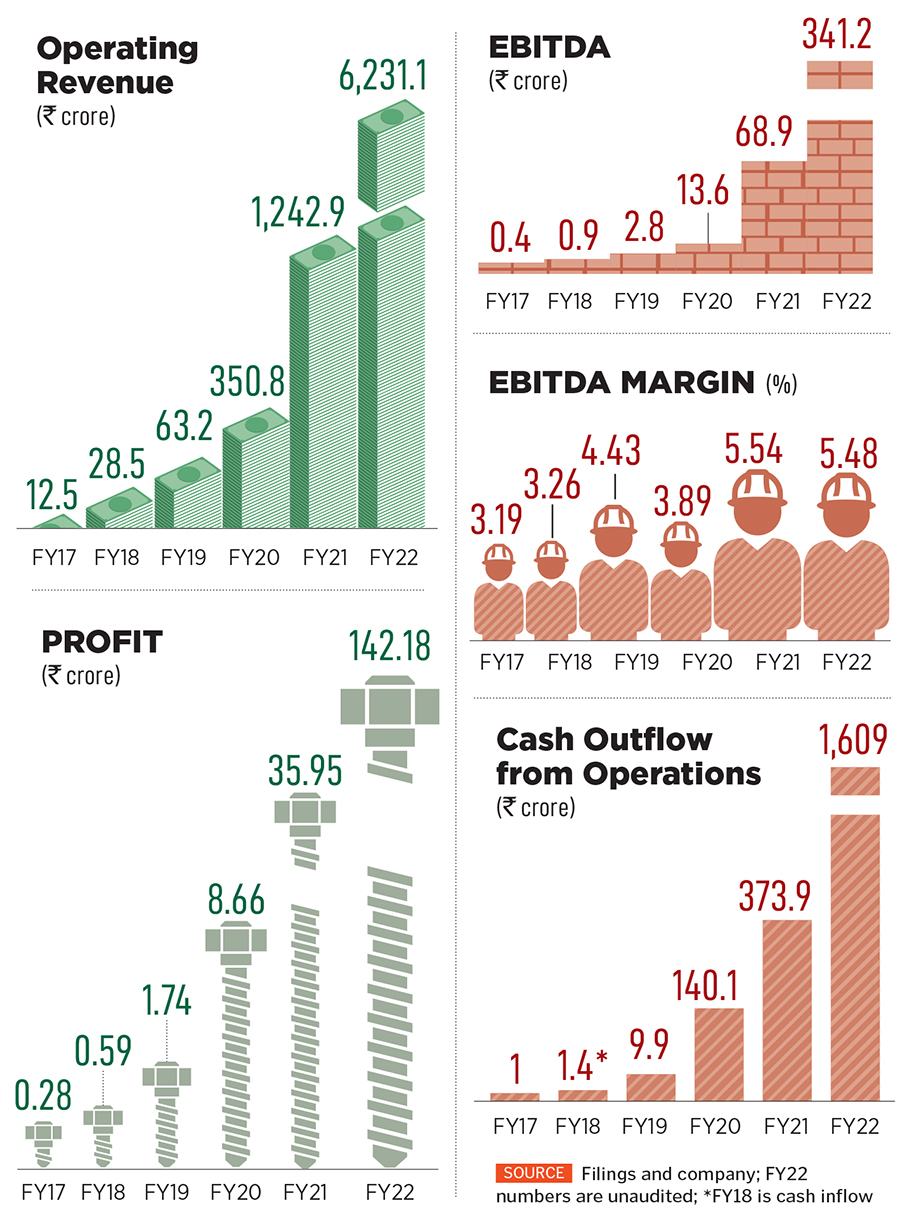 But is net profitability the only yardstick to value a company? Prakash differs. Companies with good contribution margin and showing control over customer acquisition costs are equally good business models, he contends. “I don’t think these are unsustainable models,” he underlines, adding that during the formative years, a company’s focus is understandably largely on growth. “There is a difference between positive unit economics and net profitability,” he says. If the company has positive unit economics, and is not losing money, as they scale more customers, it is still considered an acceptable growth strategy. “If you add more customers, you won’t be losing more money,” he adds. 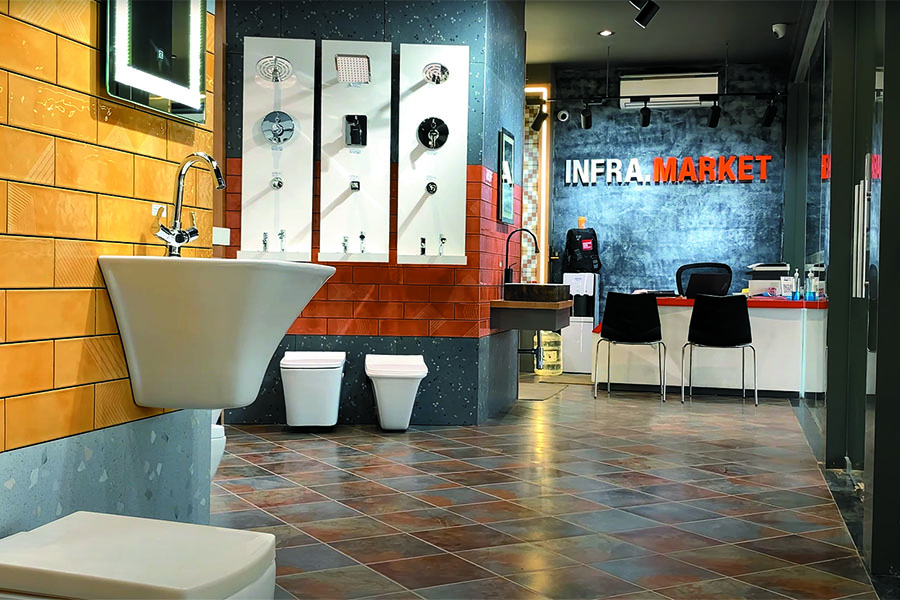 Infra.Market has its own branded walling solutions, bath fittings and sanitary tiles

Sharda, for his part, underlines that he can’t think of any business losing money. “You do business to make money, and not to lose,” he says, adding that Infra.Market has never posted losses. In June, the company raised $50 million in growth capital from Liquidity Group’s Mars Unicorn Fund. “We are still bullish on growth and there is a lot to achieve,” he underlines. Ask him if it’s easy being a unicorn, and he smiles. “I live in the real world. Unicorns are mythical,” he signs off.