How Prakash Snacks Grew in India

Amit Kumat’s company is one of the fastest growing in a space that’s difficult to succeed in. His secret: Getting the flavour right 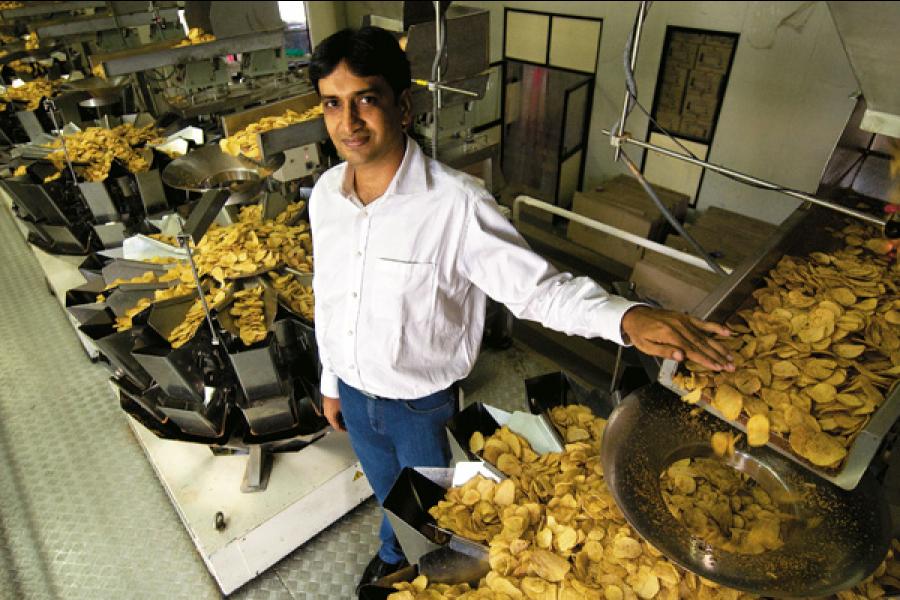 Amit Kumat laughs: “That’s not happening in the next decade.” The subject of discussion is healthy potato chips. “All that the consumers care about is the taste; this health thing is just a fad,” he says. All ye city slickers may look aghast and consider Kumat’s utterances blasphemous. But think about this: The snack food market in India is worth Rs 10,000 crore with 12,000 tonnes being consumed every year. Ten years ago the consumption number was 1,000 tonnes. Kumat knows what we may not care to admit. That this stuff is sinful and no one can eat just one!

In the last decade, Kumat and partners—brother Apurva and Arvind Mehta—have bootstrapped their way to becoming among the top five snack manufacturers in the country. In just nine years Kumat and company have built the fastest growing snack foods company in the country—Prakash Snacks. Its Yellow Diamond brand has managed to clock a growth rate in excess of 50 percent every year since it started in 2003.

“They have a strong brand with consistent positioning,” says Abheek Singhi, a partner at the Boston Consulting Group, who has spent time studying regional snack food companies in India.

Kumat had tapped Indore’s informal business network to get capital to start his business. His brother Apurva had gone to school with Arvind Mehta who over the years emerged as a significant player in the city’s real estate business. With this introduction, Kumat approached Mehta and got Rs 2.5 crore in startup capital.

The company made Rs 260 crore in revenue last year and is on track to become a Rs 400 crore player this year. And this is a tough market. There is a host of unorganised players. There is a multinational giant Frito-Lay, traditional biggie Haldiram’s and an entrepreneurial outfit out of Gujarat, Balaji Group.

To enter this market is easy, as capital costs aren’t much. But succeeding is very difficult. Parle, Perfetti Van Melle, ITC and CavinKare are all large players who found the market tough going. It is creditable then for Amit Kumat to create one of the largest snack food companies in the country. What sets Kumat apart is that he has managed to expand beyond his home base in Madhya Pradesh. His brand has strong market positions in leading snack markets like Maharashtra, Delhi and Haryana.

Prakash Snacks’ rapid expansion prompted Sequoia Capital to invest Rs 125 crore in April 2010 for an undisclosed stake in the company. Sequoia Capital’s investment will allow the company to scale up faster. Turnover targets have been set and Prakash plans to clock Rs 600 crore by 2014. Earlier, Kumat had planned to expand slowly across the country and ramp up from 500,000 outlets to 2 million in five years. He now plans to do that in three years or so. Sequoia is also investing Rs 70 crore in a new manufacturing line.

So what helped Kumat succeed?

The ostensible factor is taste—though hard to define, how a product tastes is perhaps the most important thing that decides consumer preference. “Mainae bahut paroducts launch kiyae hain jo sirf flavouring ke karan nahi chalae hain [I have launched many products that didn’t succeed only because of flavour],” says Chandubhai Virani, managing director of Balaji Wafers.

Kumat spends a disproportionate amount of time experimenting with flavours. He’s very cagey talking about this. His main testing ground: His family. The flavours are made at home by his wife and a few helpers and then brought to the factory in a concentrate form. “Even my employees don’t know how it is done,” is all he is willing to let on.

RECEIPE FOR SUCCESS
But there are two other factors—falling equipment prices and clever distribution strategy—that have made Prakash Snacks succeed.

First, consider the equipment prices: Kumat’s first challenge was manufacturing. While touring small-town India, he’d seen that large consumer goods companies worked on margins of over 50 percent. There was enough room for a player who was willing to offer similar quality at a lower price. To get that quality he would need the best machines.

He made sure he didn’t go for an Indian line as the difference in quality would have shown up immediately. Japanese manufacturer Ishida was chosen. Kumat’s facility in Indore works with fully automatic lines—potatoes are cleaned, peeled, cut, washed, fried, flavoured and packed. They can churn out as many as 50,000 packets in a day. Along the way, Prakash has been aided by falling prices for equipment. A line now typically costs Rs 60 crore and pays itself off in four years.

CLEVER DISTRIBUTION
Once the flavouring and production were under control, things began to move fast for Prakash. His next challenge was distribution. This is where he says he took a strategic step. Retailers in SEC (socioeconomic classification) C and D class outlets had for years been neglected by Indian consumer goods companies.

These are typically in lower class neighbourhoods and slums where the consumption is lesser. Consequently, few shops here are supplied by big company distributors and have to rely on the wholesale channel for supplies. Now imagine someone comes along agreeing to supply products that meet the needs of their customers and in exchange asks for immediate payment. Since the shop owners had been paying the wholesaler immediately anyway, they lapped up the offer.

(Prakash, like Balaji, has more recently ventured into A and B class outlets where its products are being well received. The company has kept its terms of trade unaltered but Kumat acknowledges that once the company gets into the modern trade channel, that may well change.)

This approach has also allowed Prakash to operate a very tight ship with its working capital. The company gets a 15-day credit for its raw materials. Kumat has made sure that there is no more than seven days of inventory in his system. The super stockist keeps another week of inventory, which he pays for upfront—again no credit is given. For any small FMCG company, stuffing the channel and achieving sales by offering credit to show growth is alluring, says VT Bharadwaj, managing director at Sequoia Capital. “We are wary of investing in such companies.” At any given point of time Prakash’s  receivables are no more than Rs 5 crore. The super stockist makes sure his liabilities for the raw material are below this amount.

Instead of solely focussing on profits, Kumat has sometimes chosen to lose money in the short term to make sure that the consumers get his chips at affordable prices. Take for instance the time when potato prices doubled to Rs 20 a kg two years ago. Kumat lost money for a quarter but did not raise prices.

Consider distribution now. Initially, the company set up a network of super stockists who supply to distributors who in turn supply to shopkeepers. But as Mahesh Purohit, area sales manager at Prakash explains, they quickly realised there was a loss of margin and it was difficult for the company to justify a super stockists’ return on investment. So, in a departure from what other snacks companies do, Prakash, in large cities like Mumbai, supplies directly to the distributor through a company-owned warehouse. In the northern suburb of Malad, as many as 30 distributors show up every morning in their Piaggio Ape tempos, and take goods worth Rs 15,000 to sell every day. Each tempo owner makes Rs 9,000 a month after all expenses.

NO ADS PLEASE
Kumat has so far run a tight ship and used taste to succeed. His challenge now is to build a pan-India brand.

Kumat doesn’t believe in advertising—for a small brand like his, it is hard to justify the expense. According to him, packs of chips and namkeens strung on shops are the best advertising one can ask for.

As he ramps up to Rs 400 crore in sales this year, he doesn’t plan to change that. He’s far more comfortable giving it back to the shopkeeper as additional incentive or to the customer in the form of a free tattoo or toy. Those, according to him, work much better in driving sales.

But VT Bharadwaj of Sequoia, who is now an investor in Prakash Snacks, thinks that advertising support will be needed as Prakash grows in size. Kumat would do well to realise that the trade relationship he enjoys in the northern part of the country may be much more contested in the west and the south where brands such as Frito Lays and Balaji are very strong. Also, the taste preferences will change.

To combat these challenges he will need a much stronger brand identity. It will be interesting to see how Kumat brings his frugal approach to brand building as well.

Tweets by @forbesindia
Ethics Is A Verb
Mass Exit From Poverty