Naaptol: When business begins at home

Once considered a long shot, Naaptol, the home-shopping company, has managed to scale rapidly by understanding its customers better 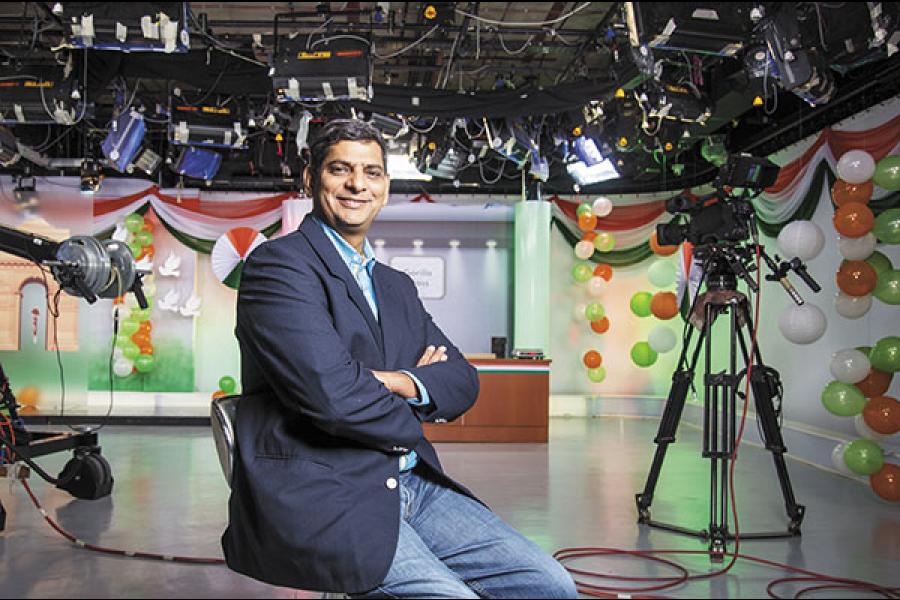 Image: Joshua Navalkar
Manu Agarwal started Naaptol as a platform to compare prices but it’s his move to turn it into a home-shopping company that has paid off

A television presenter puts a mobile phone in a glass jar along with screws, forks and other metallic implements. He then shakes the jar vigorously while breathlessly describing the product’s features. This visual, and several others like it, are beamed into millions of households across the country daily. A phone number is flashed at the bottom of the screen along with the logo of the home-shopping company, Naaptol.

As we make our way up Naaptol’s office in Rabale, Navi Mumbai, multiple studios located on the first floor are creating hours of such content that is being aired on the network’s own channels and across other TV media pan-India. It’s a wet afternoon in July and Manu Agarwal, 46, founder and CEO of Naaptol, is seated three floors above this veritable content factory. “There are six studios on the first floor and we now have the capability to do about 14 half-an-hour-long shows a day,” Agarwal tells Forbes India. “And half of this content is live.” He adds that the company attends 130,000 calls a day through its dedicated third-party call centres with a workforce of nearly 2,300 people.
The result: “We do business [sell products] worth about Rs 8 crore every day,” says Agarwal.

In FY 2016, the company claimed to have clocked revenues of Rs 510 crore, up from Rs 160 crore two years ago. Most of the revenue (barring a minuscule chunk from its TV channel) comes from the commissions it earns from the sale of products—from consumer electronics to apparel to household goods—through its marketplace model. However, when it was founded in 2008, Naaptol, which translates into ‘measure and compare’ in Hindi, was merely a platform to enable comparisons of product prices online. “It was only a technology play,” Agarwal explains. Within a year of its existence, though, it became clear that the model was unviable. Online commerce firms were unwilling to pay for lead-generation, the primary source of income for a player in that space. To add to that challenge, Google, too, had begun price comparisons through its search platform. “We had to innovate on our model,” says Agarwal.

In 2009, Agarwal noticed that the Bennett Coleman & Co Ltd (BCCL)-owned The Times of India had a ‘readers’ offer’, which involved listing products in the paper that subscribers could purchase by making a call. The publication would earn a commission on these sales. This model was financially viable for the Times Group, Agarwal was told by some experts he consulted, only because they owned the medium. But Agarwal felt otherwise. “We thought that 2009 was a time when print was going through a recession and ads were limited. Maybe this is a workable model,” he says.

Soon after, Naaptol bought ad space in regional newspapers, starting with Gujarati daily Sandesh, to test the waters. And Agarwal was proved right. Naaptol’s phones wouldn’t stop ringing. “With a back-of-the-hand calculation, we could see that the model had potential. You can advertise, and still have enough margins, including delivery and operational costs, and overheads,” explains Agarwal. He decided to go with it.

Within two years, Naaptol was running advertisements in over 50 print publications almost on a daily basis. The company raised its first round of funding from Canaan Partners, worth Rs 33 crore in 2010, and also struck a deal with India Post in 2010 to leverage its reach in the hinterlands. It also began buying ad slots on TV networks that year, a medium which would go on to become its bread-butter-and-jam eventually. “On TV, two skill sets are required. Your programming ability and your distribution channels,” says Agarwal. And the company found an experimenting lab when it launched its Hindi movie channel, Cinema TV (which still exists), in 2012.

Born in Jaipur, Agarwal topped his electronics engineering class from IIT-Kanpur in 1992. After completing a master’s degree in computer science from the University of Minnesota in the US, he worked with flash memory chip design firm WSI till 1998, when he came back to India and started his first company, Design Expo, with his IIT classmate Amar Sinha. They built two noteworthy properties, ShubhYatra.com and CricLive.com, which were sold to Thomas Cook and Modi Entertainment Networks (MEN), respectively, just after the dotcom bust, ending his first entrepreneurial foray.

“It [the experience of building his first company] taught me two things,” says Agarwal. “One: That B2C (business-to-consumer) is an exciting business. You can feel the pulse every minute as visitors are coming to your website and transactions are happening. The second is that irrespective of the ups and downs, don’t pull the plug.”

Between 2003 and 2008, Agarwal founded and ran a company called ANMsoft, which builds business-to-business solutions for online retail and travel. It was only in 2008 that he returned to B2C and started Naaptol. Upon its entry into the home-shopping segment, Naaptol was considered a long shot in a market with two significant players: Network18-owned HomeShop18 (Disclaimer: Network18 publishes Forbes India) and NewsCorp-owned Star CJ (now ShopCJ). It has, however, defied scepticism and rapidly scaled up operations.

“The spending power of people in India is only going to rise and it’s going to come from a broader base of customers,” says Suresh Shanmugham, managing partner and co-founder of Saama Capital, an investor in Naaptol. However, he adds, home-shopping is a complex business, with a number of components that need to be kept in mind, including call-centres, logistics and technology.

Considering the fact that Naaptol has its entire online retail infrastructure in place, Agarwal is often asked about a possible pivot to ecommerce. “We’ve focussed on our core and that’s done well for us,” he says.

But he may not be able to stay at status quo either. For one, home-shopping as a category continues to cede ground to online retailing, according to a recent report by research firm Euromonitor. As home-shopping firms branch out to different linguistic regions, they must invest in programming in various local languages to survive.

Also, the rate of cash burn in home-shopping, though not nearly as high as its peers in online retail, is still a factor. As a result, Naaptol has not yet succeeded in becoming profitable, though Agarwal expects it to happen this year. “We lose less than a million dollars a month,” he says.

But though ecommerce is clearly the future, Euromonitor data suggests that the size of the home-shopping market in India has increased from Rs 990 crore in 2010 to Rs 1,560 crore in 2016. (Euromonitor defines home-shopping as “the sale of consumer goods to the general public via mail order catalogues, TV shopping and direct mail”. This excludes sales ordered and paid online.)

And television remains an efficient medium to reach large audiences. “Despite the rapid penetration of internet in India, we believe that the television network will continue to have the widest coverage geographically and demographically,” says Mitsui & Co’s general manager of media business division, Yuichiro Hanawa.

As Naaptol aggressively increases its presence on television and improves the quality of its content, Agarwal lets the data guide him. “Every day, I look at it and then breathe down their necks,” he says, pointing at an executive seated nearby. “As soon as my data starts telling me that there’s potential in ecommerce with a decent margin, we’ll start focusing on that.”

Tweets by @forbesindia
Ten interesting things that we read this week
BlackBerry Hub, a genuine productivity option on Android