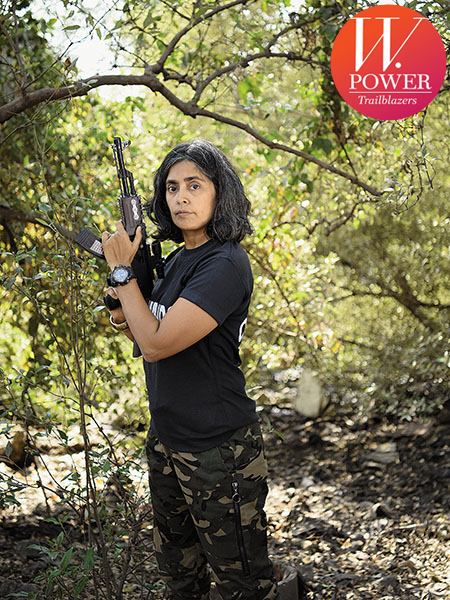 “On a weekend if I’m in Mumbai, I go to my set-up and spar with men half my age and twice my weight. I box and grapple with them, and take them down on the mat. I get bashed and bruised but give them a hard time until they are knocked out. Now I’m nearing 50, so it gets tougher but you have to work it out somehow,” says India’s first female combat trainer, Dr Seema Rao.

Rao has spent the last 20 years training, without any compensation, over 20,000 soldiers of India’s elite armed forces in close quarter battle (CQB), which is armed and unarmed battle within 30 yards. She has received three Army Chief Citations, a US President’s Volunteer Service Award and a World Peace Diplomat Award for her service.

Despite being a doctor by training, Rao decided to give up the financial stability that comes with practicing medicine and instead dedicated her life to train the armed forces, and has spent most of the last two decades in scorching deserts, snow-clad mountains and jungles, training young personnel. Her ability to innovate upon traditional combat methods, and her physical and mental strength, have paved the way for more women to enter the male-dominated military.

*****
At her home in Mumbai, her living room reflects her multifaceted life: A table full of trophies, a rifle leaning behind it, photographs from training sessions and award ceremonies, a cabinet of medals, and books on a vast range of subjects.

But, she says, it was destiny: “We were just two enthusiastic youngsters trying to make a difference. Some forces found our work to be worthy and it just worked out.”

Rao had trained in boxing, taekwondo, firefighting and rifle shooting, with then fellow-student and martial arts aficionado Deepak Rao while they were in medical school together. By the time she graduated she was a black belt in taekwondo and had finished an adventure course from the Himalayan Mountaineering Institute with a medal despite a knee injury.

But when it came to military training, the odds were stacked against her. First, by tradition, the military is averse to civilians. Second, taking advice about military and combat techniques from a civilian is unheard of, let alone letting them become a trainer. Third, it’s even tougher to break into the inner circuit for a woman. 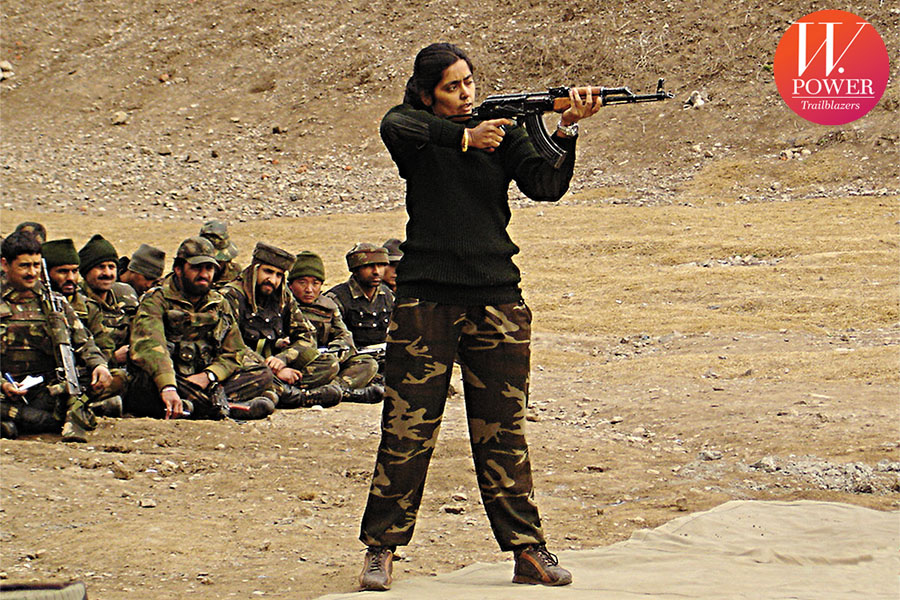 Seema Rao, who can shoot an apple off her husband’s head with an AK-47 at 75 yards, at the Corps Battle School in Kashmir
She proved it all wrong. “I knew I had to hone my physical skills and abilities, so I worked hard. The forces that were open to what we brought to the table, welcomed us,” she says. The ones that weren’t, didn’t.

Their first assignment was with the Pune City Police in the early 1990s. A chance meeting with the commandant of the Pune Police—while on a morning walk—and a quick demonstration of their skills was enough to impress him. The Raos were invited to conduct a workshop in unarmed combat for the Pune Police. He then recommended them to the Mumbai Police. “It got the ball rolling,” Rao says.

“They taught our forces everything about fitness, how to eat, exercise, reduce weight,” says VS Deshmukh, retired Additional Director General of Police and Commissioner, State Intelligence Department, who was in charge of the training seminars conducted by the Raos.

“I gave them letters of recommendations, and since then they have done excellent work everywhere. I’m 74 and she’s still my fitness expert and decides my routine.”

Their first national assignment came in 1997 when then Mumbai Police Commissioner RS Tyagi became the director general of the National Security Guard (NSG). While in the late 1990s, Retired Brigadier Balbir Singh gave them their big break—a meeting with then Army Chief General Shankar Roychowdhury, which culminated in a six-week course organised for the Parachute Regiment Training Centre in Bengaluru.

“There are a lot of sharpshooters outside the Army. Once you get into the art of warfare, you don’t have to be in uniform to make a difference,” says Singh, who has spent a month and a half in training camps with the couple, and knows them since their early days.

Her story is about a shy bullied girl who was hell-bent on transforming her perceived weakness into strength. She used martial arts to do that. It all boils down to one painful incident, she says.

In the early 1990s, recently married, the couple got into an ugly scuffle with rag pickers at Girgaum Chowpatty in south Mumbai where they trained every morning. “This is your fight, deal with it yourself. You’re ready,” her husband told her. Her swift reflexes and coordinated moves from years of training made sure only her T-shirt bore the brunt of the knife fight. “I still get goosebumps. But after that, I felt like a different person was born,” she recalls. “I knew I had finally moved from weakness to strength -- from being controlled to being in control.” 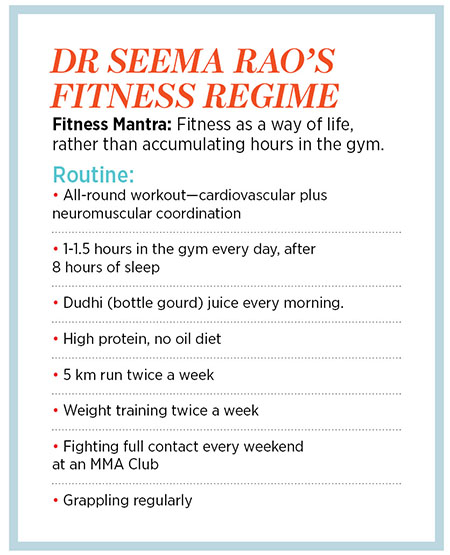 Even as assignments started piling up, Rao started training rigorously to become an ace shooter. “I can shoot an apple off my husband’s head with an AK-47 at 75 yards,” she says with a smile, a feat that was achieved when her abilities were questioned by a trainee at a camp and has since became part of their demonstrations.

The couple has developed the Rao Reflex Shooting Method, used by the Indian military, which is used to shoot quickly and accurately without spending time taking aim, as if by reflex. “At close quarters, you need to shoot first before the enemy’s fire rips you apart. The technique trains you to do that,” she explains. She can shoot five rounds of a 9mm pistol at a target in under two minutes.

“Anyone can shoot, but improving the reflexes of your arms, and good arm-and-eye coordination means when you fire at a person, it will hit. It makes all the difference, and that’s what they brought to the table,” says Singh. They also made unarmed combat more interesting for the troops, he adds.

*****
Battle and combat techniques continuously evolve, based on environment, technology, weaponry and ammunition. With terrorism on the rise in India in the late 1990s, Rao saw the need to innovate CQB techniques. “Terrorist encounters take place at 30 to 40 yards, rather than 500 yards of conventional battle, and may include civilian hostages and concrete walls. So you need CQB techniques,” she says.
Being a seventh-degree black belt in unarmed combat, she trains soldiers to tackle the enemy at close quarters even without ammunition. Once your ammunition is over, she explains, there can be a hand-to-hand combat or hand-to-weapon combat. This is where her training in Bruce Lee’s philosophy of martial arts—Jeet Kune Do (JKD) is based on the philosophy of intercepting an attack before it takes place, and retaliating with minimum energy and movement—comes handy. She’s one of five female trainers of JKD in the world, and also the most senior. “It teaches us the vital areas in a human body. The science is where I strike with my hand or weapon, to handicap, maim or cripple the enemy. This helps in close encounters,” she says.

Rao has also done courses in mountaineering, rock climbing and scuba diving to understand different terrains and the difficulties commandos may face. “Sometimes the cold makes your fingers go numb, and you can’t hold the weapon. It tests you, but there can be no excuses.”

In 2010, Rao was made an approved CQB training resource for the government after the Ministry of Home Affairs ordered a pilot course to check the veracity of their training. In 2011, her husband Deepak was made Honorary Major of the Territorial Army for his contribution to the armed forces. “There is no provision for women to get ranked in the Army till today. So she [Seema] missed the honour,” he says. But she has no regrets.

*****
But the path to success has been strewn with personal sacrifices. Rao decided to forgo having a child to remain dedicated to her work, and later adopted a girl.

“Motherhood is beautiful, but it causes many physical changes. I have to be in top form,” she says. A head injury on assignment once caused amnesia that lasted weeks, and she has been shot at by insurgents. A monkey rope exercise at 50 feet gone awry led to a spinal fracture tying her down to a bed. But quitting was out of the question.

Would she do it any other way? “I think I’ve lived well. With all its ups and down and with all the strife, this is the life I want to live,” she says with a smile.

While dedicating their life to the armed forces has been intellectually and spiritually fulfilling, doing it without compensation—the armed forces only provided logistics, and boarding—also meant that at times it was difficult for them to make ends meet. “We had to break our fixed deposits, but then, we always knew the path wasn’t going to be rosy,” she adds.

In 2003, they set up the Academy of Combat Training in Mumbai to train corporates, of which she’s the technical director. “Finally, money started coming in,” she says. Deshmukh adds, “I’ve seen the girls in her academy fight. They learn how to defend themselves, and can take their opponent down mercilessly.”

She also spent the better part of last year writing a book on the aspects of explosive and IED recognition, which found recognition among the Indian forces, CISF, police forces, security units of Infosys, Isro, and the Mumbai airport.

Her previous eight books have found a place in the libraries of the Indian armed forces and the US’s Federal Bureau of Investigation.

While she takes up fewer assignments now, she uses her story to make a difference to society. She has five Ted Talks under her belt and is often invited to share her story with the youth.

Recently, she spoke at the National Women’s Parliament in Amravati, Maharashtra, addressing 15,000 young girls. “I like my military assignments, but I like contributing to society too. I hope that my story will inspire the youth—especially women—to break out of their shells and explore their inner attributes, even if it means taking an unconventional path.”

Tweets by @forbesindia
As software bots get more complex, only a multi-talented workforce will thrive: Wipro COO
Beena Kannan: Taking the silk route