Initiatives to spread awareness about social causes have often adopted symbolism to spread the word. The Ice Bucket Challenge is one of the many that have gained mass following 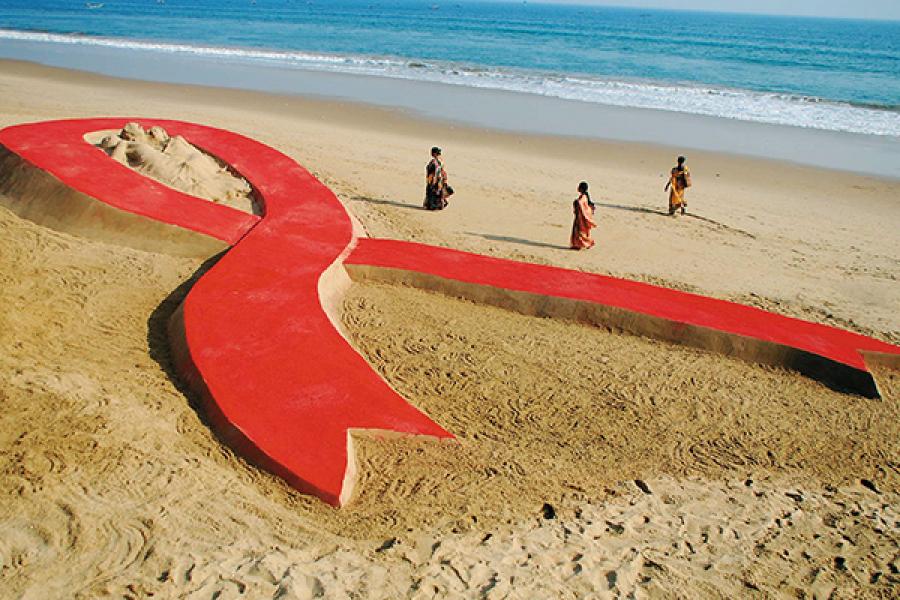 Image: Getty Images
Women walk past a 100-foot-long red ribbon sand sculpture on the eve of World AIDS Day on December 1, at a beach in Orissa

1. Yellow ribbon: Homage to soldiers
Historically known to be tied around trees or worn by women waiting for their beloved to return from war, the yellow ribbon has found mention in songs over the decades. Yellow ribbons came to symbolise support for American troops sent to the Middle East for the Gulf War in 1991, and were tied around porch pillars, electricity poles and trees. They were found as car bumper stickers and worn to rallies against war as well as in support of soldiers.

2. Red ribbon: AIDS
New York-based Visual AIDS Artists’ Caucus started the Red Ribbon Project  in 1991, inspired by the symbolism of the yellow ribbon. It selected red for its association with blood and love and to demonstrate compassion for AIDS patients and their caregivers. British actor Jeremy Irons was the first to publicly wear the ribbon at the 1991 Tony awards, triggering widespread awareness and acceptance of the symbol.

3. Pink ribbon: Breast cancer
In 1992, the red ribbon inspired the pink ribbon, which was adopted as a symbol to raise awareness about breast cancer. The ribbons were first distributed by cosmetics giant Estee Lauder (Evelyn Lauder, a senior executive at the company, was a breast cancer survivor) and a women’s health magazine in the
New York stores of the cosmetics company.

4. Livestrong wristband: Cancer
The yellow, silicone gel wristband was launched in 2004 by the Lance Armstrong Foundation (renamed Livestrong Foundation after the cyclist admitted to doping in 2012) that aims to inspire and empower cancer survivors and their families. The foundation has sold more than 80 million of these wristbands till date.

5. Pink chaddi campaign: Moral policing
Started by a group  of women in 2009, the campaign  aimed to protest against the moral policing of right-wing organisation  Sri Ram Sena  and its leader Pramod Muthalik. It was launched after members of the organisation attacked women at a pub in Mangalore. The campaign called for pink underpants to be couriered to Muthalik on Valentine’s Day. Thousands supported the campaign online, while several hundred pink underpants found their way to the Sri Ram Sena office.