These Avengers are invoking their superpower to heal Delhi-NCR

A group of friends and family members have come together to organise beds, food, oxygen, and even doctors for Covid-19-affected families in the National Capital Region 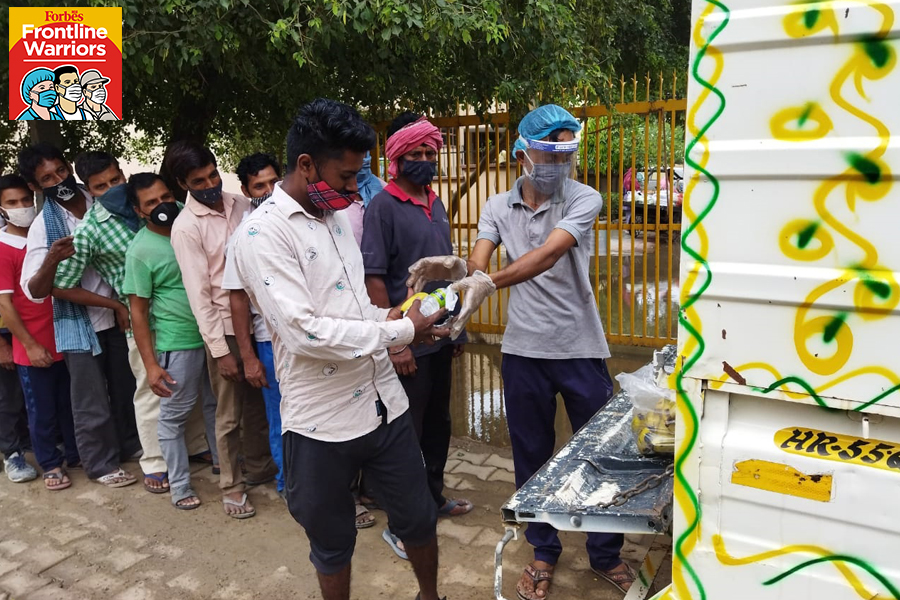 On April 20, Gurugram resident Abhijeet Dutta was rushing his Covid-positive elderly neighbour from one hospital to another in search of a bed. But they got none. Instead, they were met with horrific scenes of patients gasping for breath and plugged into oxygen cylinders, sitting in parking lots waiting to be admitted. “The hospitals had no beds, either in emergency or ICU,” says the 45-year-old. “Fortunately, my neighbour, whose son lives abroad, survived. But I realised how Covid has invaded our homes and rendered everyone—patients, doctors, hospitals—helpless.”
As cases began to explode in the Delhi-NCR region and requests for beds, oxygen, medicines, plasma began to fly in from all quarters, Dutta figured it would be a Herculean task for one individual to help as many affected families as possible. On April 26, he brought together six friends on WhatsApp to start Team Avengers, a volunteering group to provide end-to-end relief for the Covid-affected. Among them are the likes of Colonel (Retired) Shashank Kaushal, who was left shaken in his attempt to organise an ICU bed for his friend’s Covid-positive asthmatic daughter, and Deepshikha Singh Khan, a social worker already delivering meals to Covid-affected families in her residential complex.

In just under a month, the group has grown to 54 members, including some from countries like Germany, USA and Singapore, pitching in with funds, and desk and leg work. Through them, Team Avengers—christened to invoke a human being’s superpower to help others heal—organises relief work in Delhi, Gurugram, Noida, Faridabad, Manesar and even Jhansi and Gorakhpur, hometowns of two of their members, while those working remotely verify leads and coordinate night shifts. “Most of these people, all working professionals, are my friends, family members or colleagues, who were doing relief work at an individual level. I figured we could considerably expand our reach if we came together,” says Dutta. 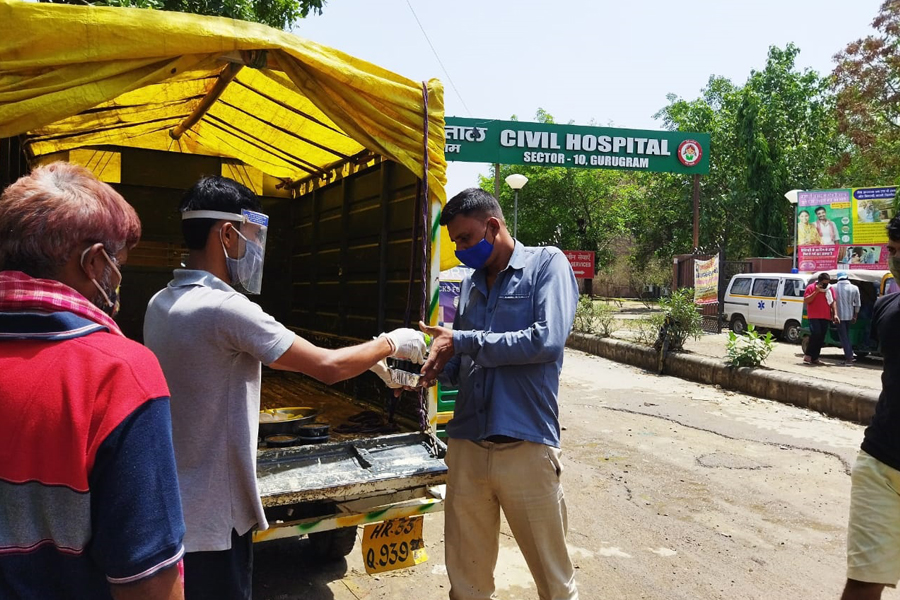 The team started off by distributing oxygen cans (those carried by trekkers and mountaineers) outside hospitals to help patients with depleting oxygen levels buy time before being admitted. “It works for about 200-odd puffs, spanning 4 to 5 hours,” says Kaushal. Such a can helped one of Dutta’s colleagues drive his mother, with an SPO2 level under 60, to a hospital in Mewat. To date, they’ve distributed around 130 cans and have another 60 on standby for emergencies.
Frequent trips to hospitals also revealed the multi-pronged challenges this pandemic has brought—not just medical, but economic and social. Attendants for patients waiting outside were going hungry since local eateries had shut down due to the lockdowns; so were frontline workers, like ambulance drivers, who had just about enough time to drop patients before darting for their next call. “So we decided to distribute meals free of cost to these people, as also to entire families who were down with Covid,” says Dutta. For instance, the case of a friend’s family, reeling from Covid-19 weakness and unable to cook for themselves, spurred Singh Khan into action. 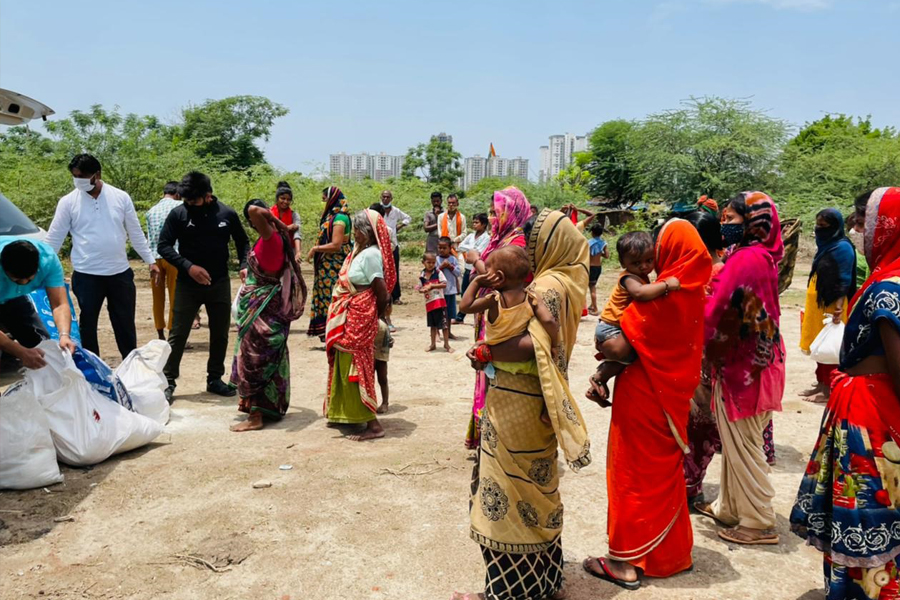 Kaushal recalls the time he went out to serve meals to the security guards in his building when a boy, “not more than 10-12 years”, jumped out of a garbage pick-up van and asked for food. “No sooner than I handed it out to him that two others of his age joined him and the three sat down on the pavement and started eating. Turns out the boy’s parents were Covid-positive, but he had to turn up for work to get paid. It broke my heart to see the hunger epidemic that Covid has brought,” he says.
With the funds they pooled in, Team Avengers set aside a budget for providing meals, starting with 25 plates a day and going up to 250 currently. Over the month, they have distributed over 4,500 cooked meals and around 150 kits of dry rations to labourers left without a livelihood due to the lockdown. “We saw a lot of poor people crowding for food and with zero awareness about masking up and social distancing. But we also realised that hunger drove them to abandon all caution. So along with food, we distributed over 200 medical kits comprising masks, hand sanitisers, paracetamol and Zinc tablets,” says Dutta, whose company has not only given him a month’s paid leave to conduct relief work but also helped him financially. 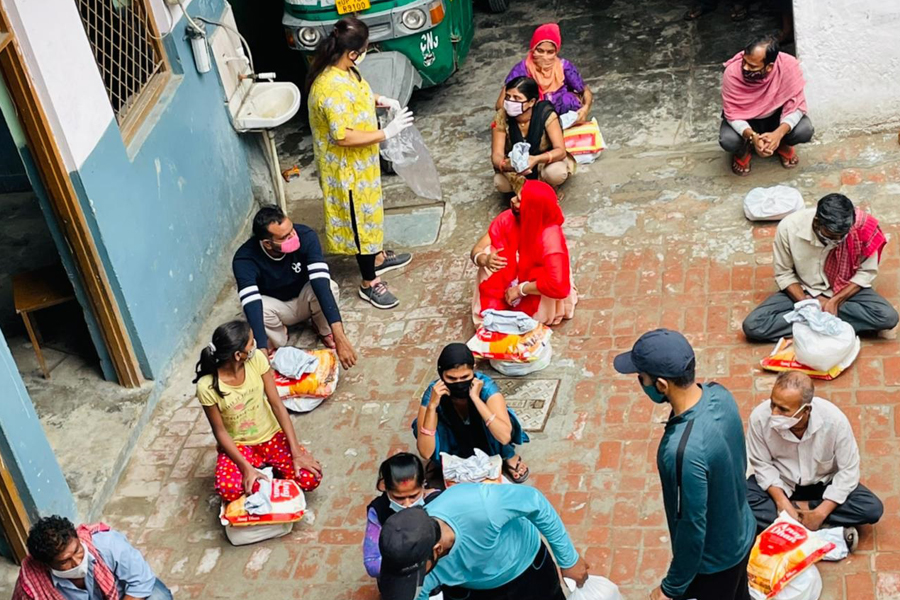 Over time, the group has also organised tele-consultations with doctors for Covid-19 patients, paying fees out of their own pockets, and counselling for those dealing with depression. One such patient was a working professional in his mid-20s, living alone in Ghaziabad. “One of my army buddies informed me that he was down with Covid but wasn’t answering their calls,” says Kaushal. Team Avengers sent someone to his house, only to find that he had gone without food, since he was too weak to cook, and was suffering from depression, having been cooped up in the house with the illness. “Not only did we organise his meals, but a few trained life coaches from among us would regularly counsel him,” adds Kaushal. “Now, he has not only returned a negative test, but is also fit and raring to join our group.”
One of the biggest hurdles the team has faced is in verifying leads. Singh Khan remembers how one of her friends struggled with spam messages as much as she did in organising a bed for her father. “It was demotivating her as much as the illness,” says Singh Khan. She mobilised the volunteers to crosscheck the numbers and draw up an authentic list before passing them on to patients. “Even then it was a race against time. Numbers verified by us would turn out to be non-functional in an hour or so.”
Not all days have been easy. The volunteers have lost people on the streets of Faridabad and Gurugram because they couldn’t end up organising beds. Singh Khan’s driver was threatened by ruffians while distributing food to migrant workers and homeless people. But Team Avengers has soldiered on.
“We aren’t superheroes, we’re just situational leaders,” says Kaushal, alluding to a phrase often used in the army to refer to the unlikeliest of leaders who rise up to an occasion during a war. “This is true for civil society too. And that’s just what we have done.”