The legacy of Russian jeweller Peter Carl Fabergé, known for his bejewelled and intricate objet d'art, lives on a century after his death, says great-granddaughter Sarah Fabergé 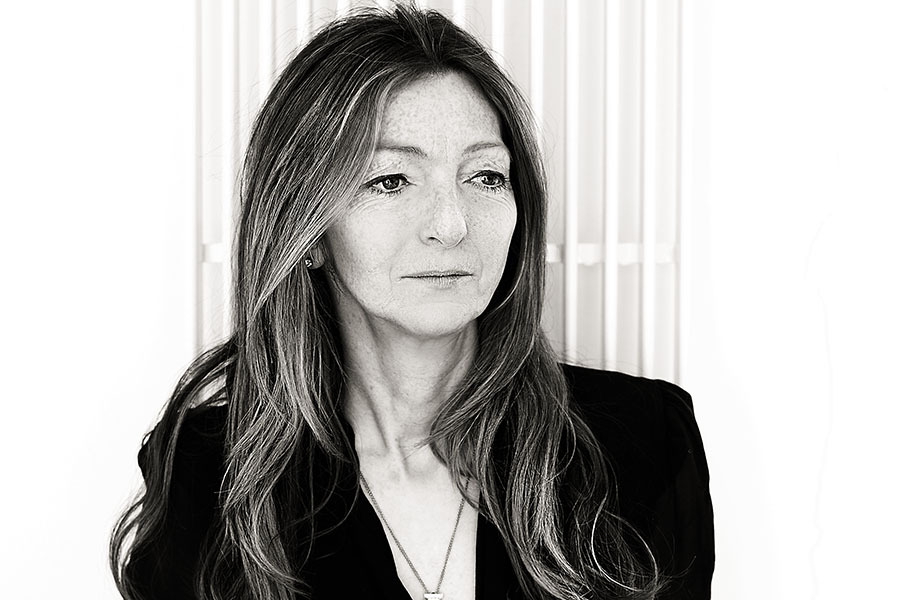 September 25 marked the 100th death anniversary of Peter Carl Fabergé, the Russian jeweller who was a master of miniature mechanisms ensconced in the most intricate of bejewelled objects. He gained success and fame by creating the astonishing Fabergé Eggs for the Russian royal family in the 19th century. Known for their workmanship, artistry and element of surprise, these eggs have inspired jewellery and automatic movements ever since. Sarah Fabergé, great-granddaughter of Peter Carl, talks about the jeweller’s rise to success, his inspirations, and the legacy that continues to shape the work of the House of Fabergé. Edited excerpts: Q How did the House of Fabergé begin in Imperial Russia, and how did it come to be so close to the royal family? Gustav Fabergé started a jewellery company in St Petersburg in 1842. However, it was Gustav’s son, Peter Carl Fabergé, who took the company to international acclaim. As a trainee goldsmith, he served an internship at The Hermitage, where he saw and handled the treasures of the Romanov household. Some years later, the Fabergé company made a replica of a Scythian Treasure from The Hermitage collection and displayed it at an exhibition in Moscow in 1882. The fine workmanship caught the eye of Tsar Alexander III, and by 1885, Fabergé was ‘Goldsmith by special appointment to the Imperial Crown’. So began the special commissions and the famous Fabergé eggs. Primarily a jeweller, Fabergé didn’t just make eggs but many other luxury items and accessories, including picture frames, timepieces, cigarette cases, table-top wear, carved hard stone figures, and many other items. Peter Carl described himself as an “artist jeweller” painting with coloured stones. As success grew, the company opened branches in Moscow, Odessa, Kiev and London. It made perfect sense for the company to open in London because the Romanov family were related to the British royal family, and Fabergé [items] were popular gifts, not only among the royal families of Europe, but also eminent business people of the day. 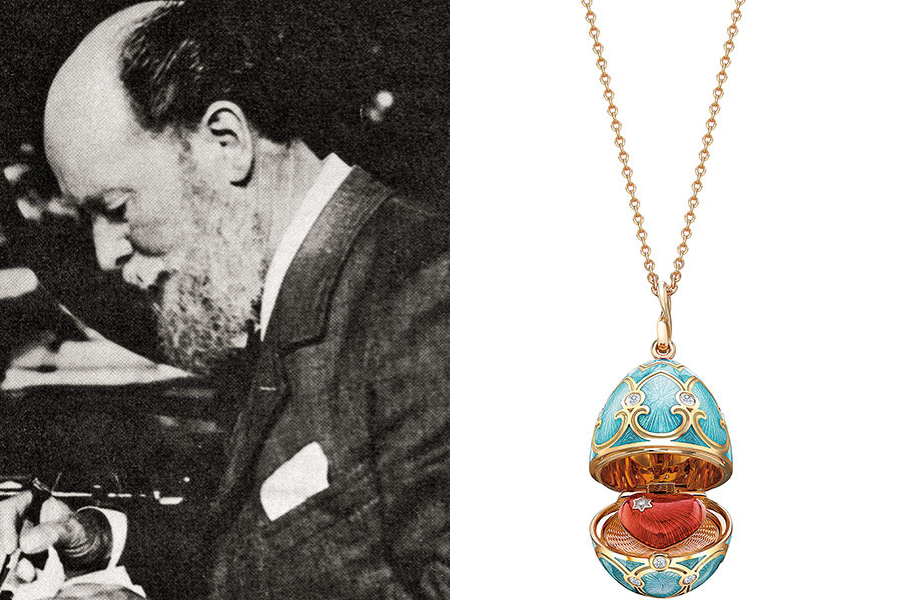 (From left) Peter Carl Fabergé; a pendant from the House of Fabergé Q How were Carl Fabergé’s designs and raw materials ground-breaking during his time? It was the combination of the use of a variety of materials, coloured gemstones and different coloured golds, but, in particular, it was the skill in the use of guilloché enamel, a technique that the Fabergé company perfected. Peter Carl’s company was always pushing the boundaries of engineering and design, with objects often featuring automata. Q What were his inspirations? Apart from his time spent at The Hermitage, it is likely that he was influenced by the art he saw as a young man on his grand tour of Europe. The Green Vaults in Dresden, Germany, are likely to have also inspired him. Q Apart from the Fabergé Eggs, what are the other iconic pieces of jewellery that Carl Fabergé created for the Romanov family? What are the quintessentially Russian motifs and themes used in his designs? Among the many objects made were jewellery suites, enamelled picture frames, cigarette cases, mantel clocks, fans, bell pushes, silver table-top wear and figures carved from hard stones. The company created beautiful objects for these discerning clients of that time and the Imperial Crown was often an intrinsic part of the design.

Q From where are gemstones and other precious materials sourced for Fabergé creations today, and what is the role that sustainability and social responsibility play in this? We are proud to work with Gemfields, a world-leading supplier of responsibly-sourced coloured gemstones. Gemfields specialises in the mining and marketing of emeralds and rubies from some of the finest sources in the world. The Colours of Love Collection exemplifies ‘a life in colour’, seamlessly fusing extraordinary coloured gemstones, artistic ingenuity and exceptional craftsmanship. The collection features Mozambican rubies and Zambian emeralds from Gemfields’ mines. Gemfields work with local communities, governments and conservation NGOs to ensure every gemstone sold supports health, education and livelihood initiatives, minimises effects on the environment and protects Africa’s biodiversity. The Colours of Love collection also uses metals comprising Peruvian mined gold ore that contain no mercury, therefore making these environmentally sustainable and guaranteeing complete traceability across the supply chain. Q Which aspects of Carl Fabergé’s design legacy live on in the current creations of the company? Today, Fabergé offers a wide collection of jewellery, timepieces and objet d’art, including, of course, egg pendants. We do not copy previous designs but take inspiration from our past to create contemporary pieces. Today’s Fabergé continues to be inspired by the spirit and ethos of Peter Carl Fabergé and his workmasters to create jewellery and objects for the 21st century. As we remember his passing 100 years ago, his legacy of the artist jeweller lives on. We take forward the concepts of fine craftsmanship, colour, creativity and collaboration not only with our makers but also with our clients. 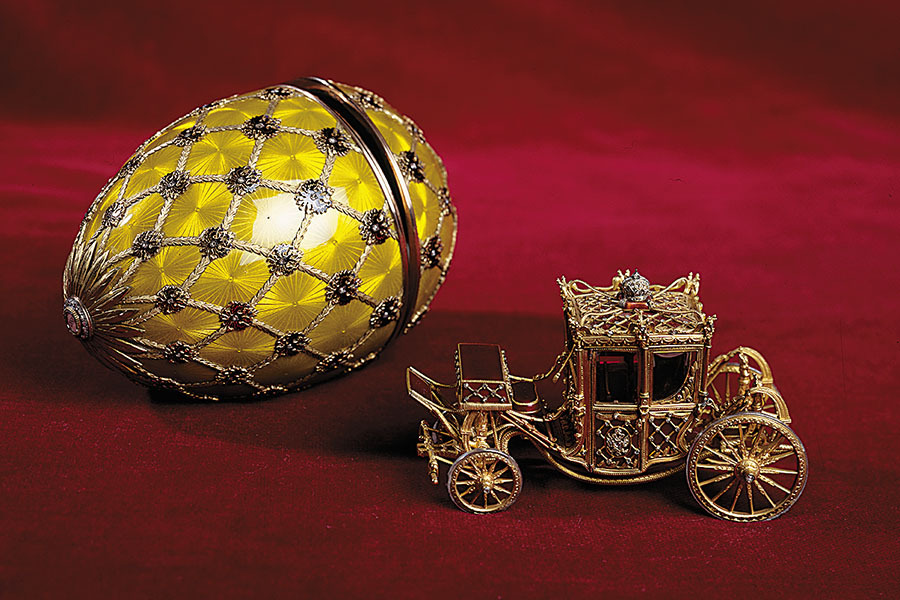 Imperial Egg at the Coronation Carriage (Forbes collection), offered by Tsar Nicolas II to Tsarina Alexandra in 1897 ‘Fabergé pioneered diverse techniques for iconic eggs’ Aurélie Picaud, Fabergé Timepieces, explains the mechanical genius of the famous Fabergé Eggs, and how they have continued to inspire the brand’s contemporary range Q What are the various aspects of the Fabergé Eggs that make them iconic pieces of jewellery and mechanical accomplishments? First, the perfect proportions of the iconic egg shape itself, which is entirely balanced. It is a shape that is not easy to achieve due to the angles, and the fact that there is not a single flat area, and there is a constant curve. Our eggs (both past and contemporary) achieve the highest levels of craftsmanship using diverse and unusual techniques that Fabergé himself pioneered: These techniques include guilloché enamelling, engraving and invisible setting. It is also difficult to talk about the eggs without talking about the concept of surprise, the magic that lies within each egg. Q Which of these eggs have the most complicated mechanical movements? What were the challenges in accomplishing them? Several of the Imperial eggs had complicated mechanisms. Undoubtedly, the most complicated of all was the Peacock Egg, presented by Emperor Nicholas II to his mother, the Dowager Empress Maria Feodorovna, on Easter in 1908. The challenge Fabergé had was to develop mechanisms for miniature objects. The Peacock Egg was inspired by the famous automaton Peacock Clock made by the English goldsmith and entrepreneur James Cox. Although the bird of the Peacock Clock was life-size (it was 7.5 feet long), the Fabergé Peacock Egg was just 6 inches long. Although its ‘surprise’ is a peacock, it is actually on open display, as the egg is a Louis XV style rock-crystal one, with the mechanical gold and enamel bird being clearly visible, roosting in the branches of a gold and enamel tree. The peacock is 4.75 inches long. Knowing how to develop the mechanism based on the clock was one thing, but shrinking it to a fraction of its size was quite another. Also, the automaton peacock in the egg does far more than the one in the clock, which is static. When removed from the egg and wound, the bird in the Peacock Egg struts around, with its head held high, but moving from side to side. Periodically, it also fans out its beautiful enamelled tail. 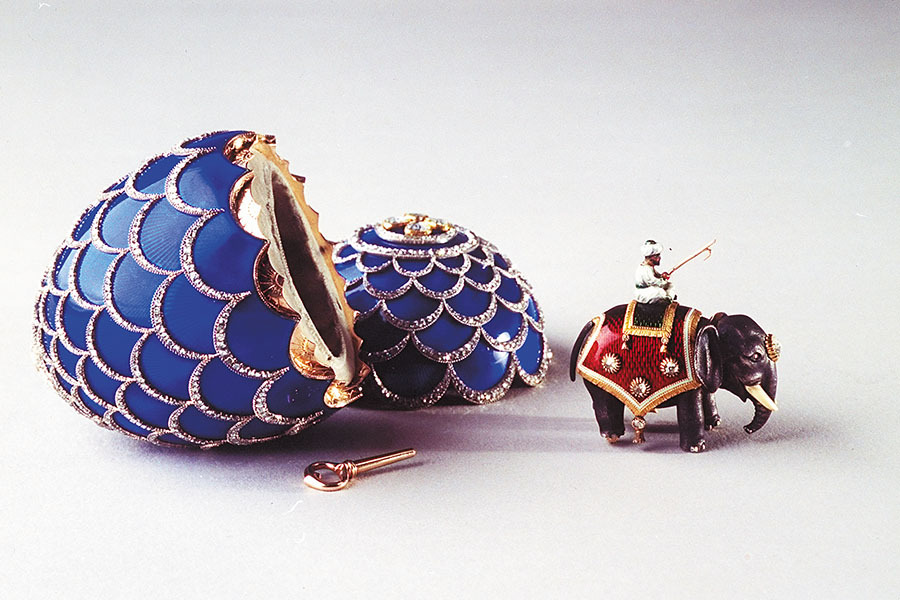 Translucent enamel egg, encrusted with 1,618 rose-cut diamonds, made in 1900 by Fabergé. It opened to reveal wind-up elephant that can walk and wag its trunk Q Which aspects of the movements have been carried forward in the company’s more contemporary products, such as watches? Our contemporary designs and mechanisms are inspired by the iconic pieces of the past. The movements of our complicated timepieces are exclusive to Fabergé, and we create these by collaborating with outstanding watchmakers. The Peacock Egg from 1908 was the inspiration for our Compliquée Peacock timepiece. The Fabergé mechanical movement offers an original way to display the time—the peacock fanning out its tail every hour. Sometimes, the movements themselves carry the playful spirit of Peter Carl Fabergé. This is perfectly illustrated by the Fabergé Visionnaire DTZ, with one feature that not even its owner will see. The jumping hour of the dual time zone disc is achieved through a cam deep within the movement, which is engraved with a circular wheatsheaf. The lever that tracks the 60-minute rotation of the cam is part of a larger sector that has been intricately formed to resemble a peacock, a very symbolic animal for Fabergé. Once the cam completes its hourly rotation, the lever resets to its lowest point; the peacock appears to ‘peck’ at the wheat. An invisible bit of theatre inside the technical movement itself. 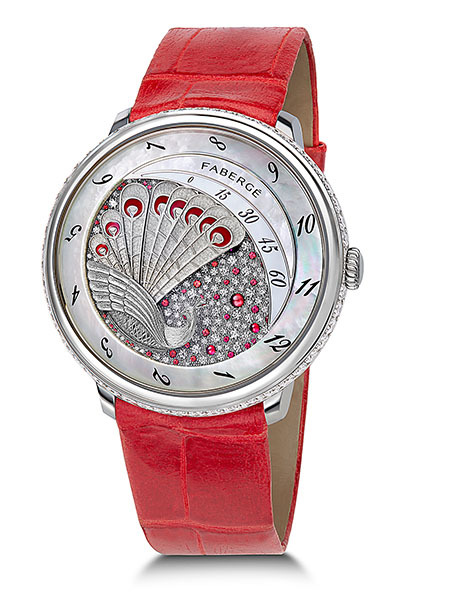 Q Which of the timepieces today have the most accomplished movements, and how have they been inspired by Peter Carl Fabergé? All our complications require very accomplished movements and they all have been inspired by our past. It is extremely important to us to include the Fabergé characteristic of ingenuity through all our new timepieces, particularly within our complications. The Fabergé Dalliance timepieces incorporate an element of surprise at the centre of the watch, inspired by the surprise at the heart of a Fabergé Egg. This surprise element can be discovered only by the person wearing the watch, and can be either a unique design to be discovered at the centre of the dial, or a gemstone taking centre stage. The movement was developed exclusively for Fabergé and displays hours and minutes, and therefore appears a little simpler in comparison to the Peacock Compliquée timepiece. The Visionnaire Chronograph also plays around the concept of the heart of the timepiece taking centre stage: A new contemporary way to display all chronograph indications at the centre of the watch.