Madhukar Parekh Of Pidilite Is Moving From Strength To Strength

Madhukar Parekh has taken forward his father's legacy, leading a company with some of India's best known consumer brands, built on constant innovation, and smart and memorable advertising 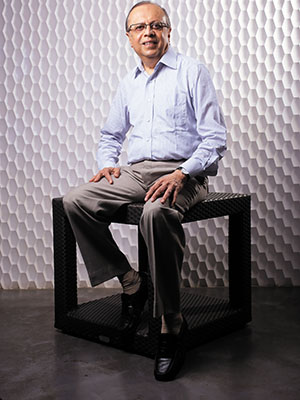 Madhukar Parekh
Chairman and MD, Pidilite
Age: 68
Rank in the Rich List: 34
Net Worth: $2.42 billion
The Big Challenge Faced in the Last Year: Keeping growth on track. A lot of categories that the company operates in are likely to mature
The Way Forward: Constantly looking out for new growth products. Pidilite has entered the construction chemicals sector, and its Dr Fixit brand is doing well

In 1954, when the late Balvant Parekh set up Pidilite, there was no easy way to sell synthetic glue; the industry used natural glues made of animal matter or starch. Synthetic adhesives were not widely known, and a few carpenters—the primary target group—had not even heard of the product. Madhukar Parekh, Balvant’s son and present chairman of Pidilite Industries, recalls that his father chose to enter the business because of the high entry barriers such as a manufacturing process that was difficult to replicate.

Over the next few decades, Balvant not only introduced a new product concept but also built a brand that became a successful industrial product and a household name across India. Pidilite Industries is currently valued at Rs 19,880 crore (as of September 16) and has 34 brands under its umbrella. In the past five years, the company has doubled its sales to Rs 3,878 crore with profits rising by 59 percent to Rs 468 crore. Fevicol alone brought in more than Rs 1,000 crore in sales last year.

In 2014, Pidilite has seen another round of aggressive price earnings expansion. Its market cap works out to an earnings multiple of 42—higher than that of FMCG leaders Hindustan Unilever and ITC. This is no mean achievement for a company that was worth Rs 60 crore when it listed in 1993.

STARTING UP
But Balvant’s story does not start with Fevicol. He had been a trader in chemicals for several years with his business centered around Jacob Circle in South Mumbai. During the course of running this business, he met someone who had distribution rights for Hoechst, a German chemical giant, in India. A young and energetic Balvant was persuaded to join the distributorship while his uncle stayed back in the chemical trading business. He became the second-in-command in the distributorship and sold various products, gaining experience that was far more varied compared to his earlier business.

So, it was hardly a surprise that when Hoechst decided to set up its manufacturing facilities in India, thus ending the distributorship, Balvant set up his own enterprise in 1954, which evolved into modern-day Pidilite.

His first two products were synthetic glue and pigment emulsions that are used to dye textiles. “Those were boom years for textiles in India and getting into this sector seemed logical,” Madhukar explains. But the sector came with its challenges: Manufacturing pigment emulsions was difficult as the kneading process required a complex set of machines. So, Balvant innovated and made the kneaders himself. Selling synthetic glue—unknown among carpenters and wood-workers—proved to be a challenge too. And this required innovation of a different kind.

He sent his son Madhukar on a tour of the market and realised that carpenters worked hard at convincing customers about the designs they created. They carried catalogues with pictures of furniture they had designed when they visited customers. Realising that the carpenters could be wooed with something extra, Madhukar offered them Fevicol Design Ideas, a book with furniture designs. In 1971-72, he began to give it away for free and carpenters lapped it up in large numbers. Today, the book’s print run is in millions with even a digital version available. Around the same time, Fevicol sales crossed Rs 1 crore: A momentous occasion and a reflection of how far the business had come.

SELLING INNOVATION THROUGH SMART ADS
But the restless Madhukar was constantly thinking of ways to make the business grow faster. One way was through a brand-building process. This was when Pidilite began to take its first tentative steps in the world of advertising. In the 1970s, when few knew of Fevicol as a brand, they started talking to Ogilvy & Mather (O&M), the global advertising giant, to understand what could be done with its synthetic glue. Ranjan Kapur—now chairman of WPP India, but then a copywriter at O&M—came up with the first idea for Fevicol. According to him, few carpenters could read in their native language, let alone in English. And yet, Fevicol was a name written in English, and most carpenters often mispronounced it. The brand needed a clear, strong and identifiable symbol. O&M worked on creating the two elephants that is Fevicol’s logo even today.

In 1971-72, Pidilite made Fevicol available in a small tube; earlier it had only been sold in large volumes. “This made it easy for us to connect with consumers,” says Madhukar.

After the economic reforms of 1984, Pidilite found its growth rates improving. The 1980s was also the time when the firm charted its most ambitious plan: It aimed to become a consumer-oriented company, which would rely on the brand to sell as much as it would on the product. However, a less shackled market also meant it could easily be displaced by a rival. Advertising, again, would be the way to keep ahead.

This time too, O&M was the preferred choice. It worked on a few campaigns, but none had much impact. This was when Piyush Pandey, now executive chairman of O&M India and then a young copywriter in the agency, changed the medium of the message.

During the 1980s, most agencies were dominated by English-speaking employees, and most advertising was also in the same language. Pandey realised that if the message had to find an appeal among a broader audience, it had to be in Hindi. And the memorable Fevicol tag line “Dum lagake haisha” was born. It was meant to be used for a new product, Fevitite epoxy, but the Parekhs used it for Fevicol.

As the bouquet of brands offered by the company increased, so did the role of advertising. And it was enough to keep Madhukar on his toes.

He brought in a stronger management team to help him. Thirteen out of 15 departments now have professional managers recruited from blue chip firms such as Hindustan Unilever and Asian Paints.

Then, he started to focus on innovation. “Every large company gets into a certain kind of inertia; but if you don’t keep looking out for new opportunities and innovating, growth will peter out in the long run,” says Madhukar who took over as managing director in 1992.

One such idea was Fevikwik. There was a long-standing market demand for a super strong adhesive. The pack was priced at Rs 20, but the problem was that once it was opened, the rest of the adhesive would harden and become impossible to use again. That was when, in the early 2000s, Pidilite went back to the drawing board and re-engineered the packaging of Fevikwik. The company created a plastic packaging material that did not absorb ambient moisture (which made the adhesive hard), and which could hold small quantities of the adhesive. Fevikwik was then sold in 0.5 gram packs costing Rs 5. Pidilite claims Fevikwik is the market leader in its category.

Analysts expect Pidilite to keep expanding at a 20 percent clip. Abneesh Roy, associate director of institutional equities at Edelweiss, points to two factors that will keep the company ahead in the years to come. First, it has made several acquisitions overseas that will give it access to a host of products that can be launched in India. “It is constantly searching for the next growth driver,” he says. He points to a car polish brand that came with a US acquisition, Cyclo, that could potentially grow into a large business in a decade. Second, the recent decline in crude oil prices will help margins. For now, the construction chemicals business is a major driver of growth: The Dr Fixit brand has consistently grown in market share since Pidilite acquired it from the Mahindras in 2000.

If the picture looks rosy, that is because it is. Consider Madhukar’s climb in the Forbes India Rich List (from 42 in 2013 to 34 this year), which underscores the consistent growth he has been able to sustain as the head of a company set up by his father who passed away in January last year. Balvant would be proud.

Tweets by @forbesindia
SoftBank to invest $627 million in Snapdeal
Not Just Torchbearers, India Inc's NextGen Is Here To Stay