A strong foundation: How Prashant Bangur cemented his position at Shree Cement 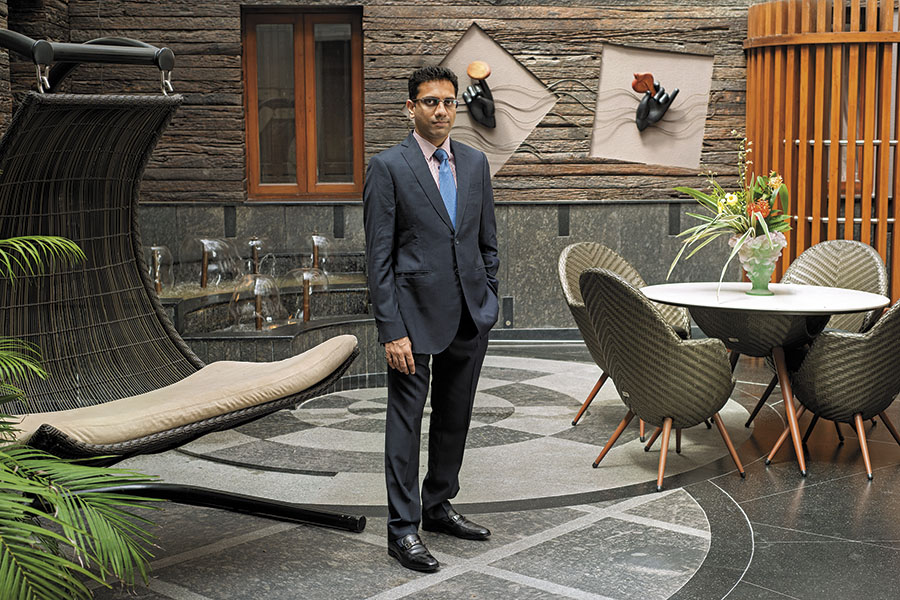 Prashant Bangur, joint MD of Shree Cement, says he does not like to over-promise
Image: Arindam Mukherjee for Forbes India

In 2003, when Prashant Bangur, then 22, entered Shree Cement’s only plant in Beawar, Rajasthan, he recalled the single instruction from his father Hari Mohan (HM) Bangur: “You are going there to observe and learn. You are not going there to give any suggestions or make any improvements.” Bangur had just completed his MBA from the Indian School of Business, Hyderabad, and says his role was loosely that of an apprentice or trainee. His father’s reasoning was simple: “If we had lived without him joining the business, we could have lived a few more years as well.” Bangur was to take notes and keep them to himself, his father had added. And over time, he realised why. As the years went by, the doubts that were raised in his mind got resolved on their own. 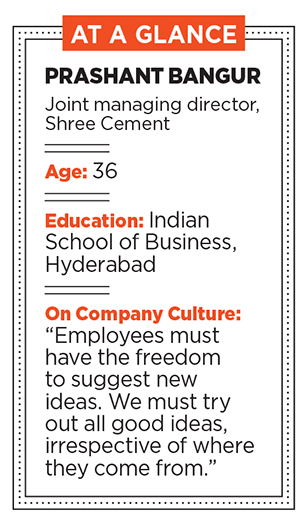 Looking back, it was the best initiation Bangur, now 36, who was recently promoted to joint managing director, could have gotten into the business. He would travel to Beawar, staying there for three or four weeks at a stretch, and immerse himself in all the technical aspects of the plant and observe the innards of its functioning. It was to prepare him for the many challenges and opportunities that would come in the next decade.

And it has been quite a decade. From a mere Rs 75 crore in market capitalisation and a one-plant operation (1.8 million tonnes of cement), Shree Cement, a virtual unknown ten years ago, has grown to a Rs 61,215 crore company with 10 plants producing 26 million tonnes. It has also taken Bangur’s grandfather Benu Gopal Bangur, the 85-year-old patriarch who chairs Shree Cement, to No 14 on the 2016 Forbes India Rich List, from No 22 in 2015—his net worth has gone up to $5.9 billion from $3.9 billion.

And the son and grandson, who run the company, are not done yet—they plan to take production to up to 40 million tonnes by 2019.

It’s a story of smart entrepreneurship, of capitalising on India’s rapidly growing economy. It is a story of focusing on the right niche—as Bangur himself says, “Somewhere it is also a case of being in the right business at the right time.” And it is also a story of approaching work in a disciplined manner... in Bangur’s case, starting at the bottom and learning the ropes as he made his way up.

Bangur spent three years as a ‘trainee’ before getting to work in Kolkata (while Shree Cement has plants across India, the father and son duo and a handful of key personnel sit at their office at Strand Road on the banks of the Hooghly). His next big test was commissioning a plant from scratch at Ras in Rajasthan. While company executives have a lot of operational freedom, the setting up of plants is something Bangur handles personally even today. “The plant will be with us for a long time and so the layout, the equipment ordered, are crucial decisions,” he says. The company typically locks in capital goods prices for future plants as well, ensuring it keeps its capacity expansion costs in check. It also helps Shree Cement secure its market position in case of a sudden upswing in demand. 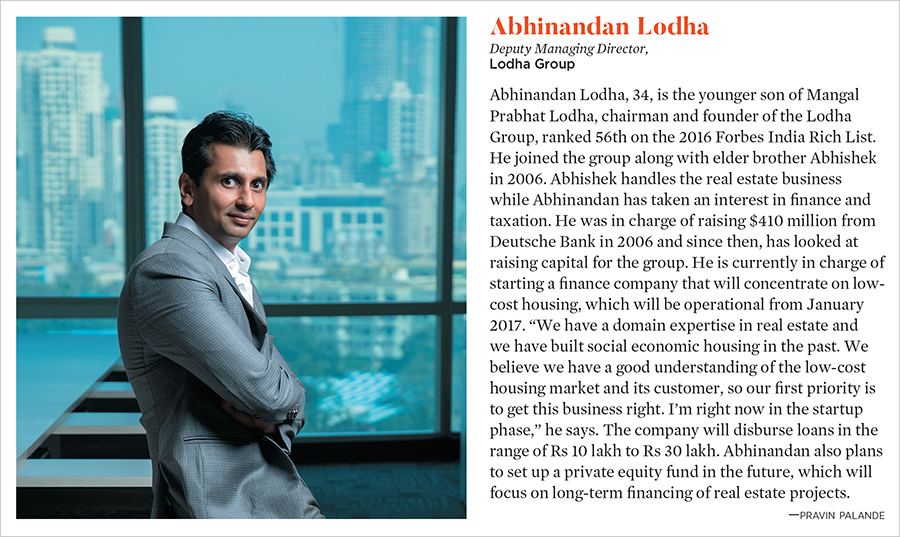 Having settled in, among Bangur’s top aims now is to foster a culture of innovation in the company, where people are not afraid to suggest and try new ideas. This environment was perhaps why Shree Cement was able to innovate with pet coke (or petroleum coke). In 2005, it was the first company to use pet coke as fuel. The cost was substantially lower than that of coal and this gave the company a competitive advantage, though it has since been nullified as its rivals have also started using pet coke and its price is now much higher. That was also the reason they tried (though they failed) using biomass as a heating source.

A human resources measure they employ is a tad unconventional. While companies across industries are known to reward top performers with variable pay, Shree Cement offers only a fixed salary. “If I reward success, then the unsaid rule is that failure would have to be punished,” says managing director HM Bangur, 64.

Seeing them together, it is obvious that the arrangement between them is a unique one where there is no division of responsibility. Both focus on big picture ideas, leaving the company’s day-to-day running to their team. “The moment an idea is given, it is forgotten who gave the idea, and it is evaluated on its merit,” says HM Bangur.

A hallmark of Shree Cement’s success has been its ability to deliver on its promises on time. When Forbes India had met the Bangurs in 2013, the company had said it would be a 25-million tonne company by March 2016. It achieved that goal and is now on track for its next one. In addition to expanding its existing plants, it recently also won a bid for a limestone mine in Karnataka and plans to start operations there. This will be its first entry into South India (at present it is only in the north and east).
In keeping with its consistent performance, the market has periodically re-rated the stock. The share price has grown at a CAGR of 58 percent since 2003, taking the market cap to Rs 61,000 crore. (The share price was up by 45 percent in the year since September 2015.)

Bangur admits the market is probably pricing in a lot of future growth. But the recent more-than-expected growth in cement demand in the east means the company’s overall growth is much better than that of its rivals. The company follows an accelerated depreciation policy and so its profits are higher than stated. The father and son duo has also built the company without taking excessive debt, and more importantly, without diluting equity capital. “Existing cash flows are enough to finance future expansion,” says Bangur.

The company has, over the last couple of years, decided to move from a three-brand to a  two-brand strategy. The industry has segmented cement into A, B and C classes. While they are all the same strength, they are marketed separately, similar to how, say, soap brands are marketed. Shree Cement’s Bangur Cement, Shree Cement and Rockstrong are sold separately, the godowns are separate and the marketing teams sit in different offices even within the same city. They even have different suffixes to their email IDs. Now, Rockstrong is being discontinued as the company believes it has effectively segmented the market with Bangur and Shree Cement.

A strategy they intend continuing with is to not buy existing cement plants but build them from scratch. The logic is simple: It costs $60 a tonne to construct a new plant versus $110-$120 a tonne to buy an existing plant. And their focus remains India.

In business, as in war, planning is key, and Prashant Bangur, whose favourite book is Sun Tzu’s ancient Chinese military treatise called The Art of War, is clear about his tactics. For one, the company will never over-promise. Ask the squash aficionado to project the next two
decades and all one gets is a modest, “We take a step-by-step approach. There is no point projecting so far into the future.” He probably knows best. No one could have foreseen their success ten years ago. Probably not even the third-generation Bangur himself.