Ahead of the moratorium to be lifted, the bank's financial health remains a big question mark, even as Yes Bank's share price has jumped 260 percent since March 6 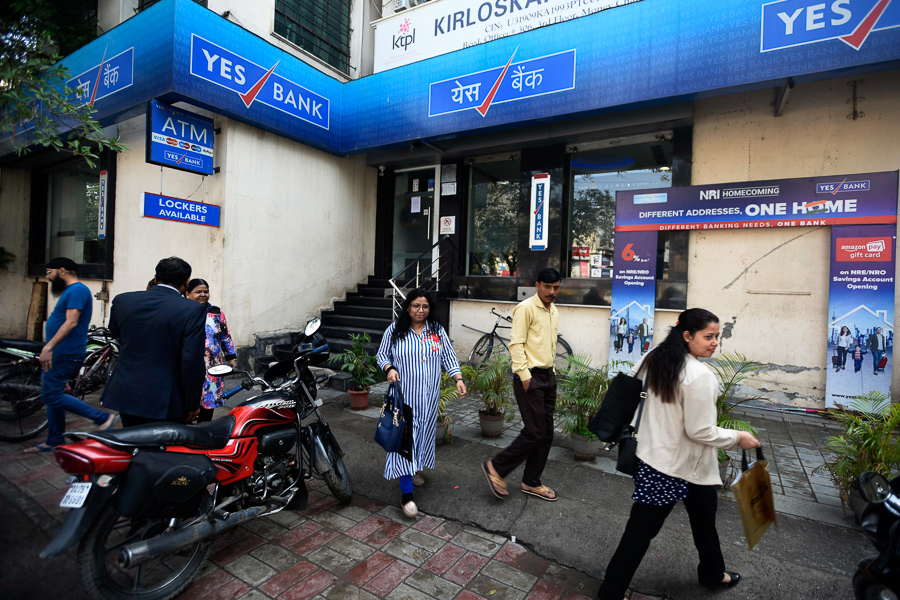 Image: Biplov Bhuyan/Hindustan Times via Getty Images​
A day ahead of the lifting of the moratorium at troubled private lender Yes Bank, its administrator, Prashant Kumar, disclosed that only one-third of its total customers withdrew Rs 50,000 (the limit stipulated) during the moratorium period. The true test for Yes Bank will be faced tomorrow when the moratorium lifts and normal banking activity commences. It is feared that retail depositors will start to withdraw their deposits from the bank and park it into safer, larger banks. To prevent a collapse of the bank, the government this month approved the RBI’s Yes Bank reconstruction scheme, through which the State Bank of India, along with HDFC, ICICI Bank, Axis Bank, Kotak Mahindra Bank, Bandhan Bank, Federal Bank and IDFC First Bank will infuse a combined Rs 10,000 crore capital into the bank. SBI’s board has approved a plan to invest Rs 7,250 crore into Yes Bank, but as part of the first phase it will invest only Rs 6,050 crore. To further infuse confidence in the reconstructed bank, SBI chairman Rajnish Kumar said, “We are free to sell [some of] our shares but I assure that we will not sell a single share in the three-year [lock-in] period.” The reconstruction scheme says that 75 percent of all shares, held by existing shareholders and even new investors, will be locked in for three years. In just 11 trading days, Yes Bank share price has jumped 260 percent to Rs 58.6 at the BSE on Tuesday, from Rs 16.2 on March 6, when the moratorium was announced. “The bank has emerged much stronger now,” Kumar said. He also disclosed that in the past four days, the bank has seen more inflows than outflows, though it is unclear whether this is through loans returned from debtors or fresh deposits coming into the bank. Yes Bank’s ATMs were “full of cash” and depositors need not worry about their deposits, Kumar added. But the financial position of Yes Bank remains a huge concern. Yes Bank, on Saturday, reported a net loss for the three months to December 2019, from a profit a year earlier. The bank also saw a sharp deterioration in asset quality and had to increase provisioning for bad loans. But the most alarming data point is that its common equity Tier1 (CET1), a key matrix, was at 0.60 percent against a minimum regulatory requirement of 7.37 percent. Yes Bank reported a net loss of Rs 18,564 crore for the September to December 2019 quarter, from a profit of Rs 1,002 crore a year earlier. The bank had reported a loss of Rs 600 crore in the previous (July-September) quarter.

Tweets by @forbesindia
Why brands must woo, and not pursue, consumers
Thoughts on investments