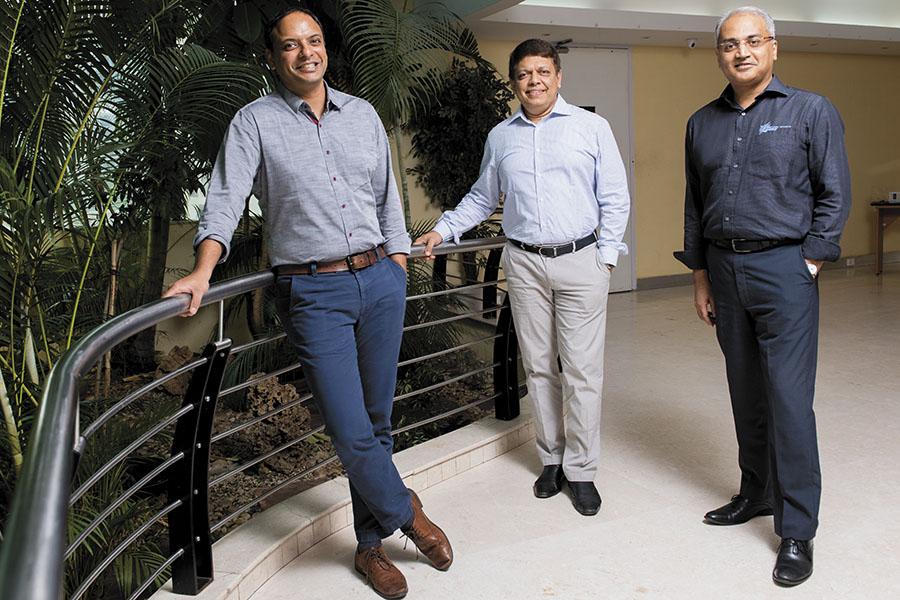 The public autopsy of India’s dismal performance at the recently concluded Rio Olympics where the country won just two medals was nothing if not predictable. The usual suspects—the government and sports bodies—came under fire. The causes of India’s sporting woes were discussed. And it all led to a familiar conclusion: India lacks sporting infrastructure. But the chairman and co-founder of Mumbai-based startup KOOH Sports, Susir Kumar, 50, thinks otherwise. “There is enough infrastructure available,” he says. The challenge in India, he believes, is underutilisation of existing infrastructure and the absence of a grass-roots level sporting ecosystem. It’s what he, along with Chirag Patel, 48, CEO at KOOH Sports, and managing director and co-founder Prabhu Srinivasan, 43, have been quietly working at addressing for the past four years. Now, with Rs 14 crore in fresh funding from existing investors, which they raised in September, and having achieved what they believe is sufficient scale, the founders have bigger plans, including expansion in India and abroad.

Launched in 2012, KOOH (an acronym for Kids out of Home) Sports functions as an outsourcing firm that provides and runs the sports curriculum for schools, replacing or occasionally supplementing the sports department. It has expanded its presence to reach over 180 private schools in 51 towns and cities across the country, and is currently engaged with about 200,000 children. It also aims to close the year with revenues of around Rs 30 crore.

While there are other firms like Bengaluru-based SportzVillage (which owns the physical education platform, EduSports) and LeapStart that work along similar lines, KOOH claims to be among the few that have adopted the ‘full stack’ approach. Essentially, it provides children sporting opportunities beginning at the school level, moving on to academies, then to high-performance centres and even sports leagues. And while this may not by itself be a novel idea (Reliance IMG, for instance, also has wide-ranging grass-roots programmes aimed at developing sports like football and basketball), the company’s ability to build its service-based platform at scale is significant.

KOOH’s inception itself was different. For one, the founders are not your regular startup entrepreneurs. Kumar is also the executive chairman of business process outsourcing (BPO) firm Intelenet Global Services, which was bought back by private equity major Blackstone from the United Kingdom’s Serco Group Plc for £250 million (about Rs 2,558 crore) last year. While Srinivasan continues to serve as Intelenet’s chief strategy officer, Patel was its head of strategy, and mergers and acquisitions until 2013.

The founders started the company after the success of Intelenet as a sort of egalitarian initiative “to help the country”. But it still had to make sense as a business, and they approached it accordingly. “We’re not like other startups, which are sometimes just concepts,” says Kumar. “We had concepts, which we converted into processes, infrastructure, everything that’s required.” Moreover, in setting it up, their past experiences informed the way in which they went about creating the new venture. For instance, says Patel, “In the BPO, when we started with the banking and financial services, we hired domain experts who understood banking and finance.” This time around, the experts just happened to be from the field of sports.

Australian physiotherapist John Gloster, 49, who is now the chief quality officer at KOOH Sports, was one of the earliest people to join the company. “I was approached by a couple of other organisations with similar ideas at the same time,” Gloster recalls. “But what separated KOOH for me was that they [the founders] came from this background where they was capable of building things and executing at scale.” Gloster, who has also served as the physiotherapist of the Indian cricket team, was invited to consult the KOOH Sports board in 2012. It provided him with the opportunity of doing something he had “been passionate about all along. And that’s improving the sporting structure for children in India.”

The company has grown intuitively. As the school sports programme grew, the company saw the potential of creating sports academies that would run after school hours and on weekends. It then approached schools with good infrastructure to strike revenue-sharing agreements that allowed KOOH Sports to utilise the facilities for those looking to pursue a career in sport. “We’re not looking to charge the steep fee that one may expect of a Manchester United or Barcelona academy,” says Kumar. “We need to be between Rs 1,500 and Rs 2,000 because we’re targeting about 100 million children, a majority of whom can’t afford a price point above this.” Two months ago, KOOH Sports had 10,000 children in these academies across sports like cricket, basketball and football.

The third level in its platform, which completes its end-to-end approach to sport, is high-performance training centres that enable the discovery and development of sporting talent. “It’s not just enough to go to schools and convince parents and run academies. We need to have an even higher level,” says Kumar. The company has set up high-performance training centres—which currently have about 800 children enrolled with them—that provide for the development of professional athletes. “The distinction between the two (academies and high-performance centres) is not infrastructure but the type of training programme, intensity and delivery model,” says Patel. It also runs properties like Speedstar, a talent hunt to find the fastest Indian runners, to create excitement around high-performance sports, besides offering allied services in the sports segment.

Considering its concept and expansion plans are based on a proven model, the company has consistently found financial backing from a number of influential investors. “We knew it was going to be a tough business to get off the ground,” says Aditya Parekh, co-founder of private equity fund Faering Capital. However, he says, for someone who has children in school, the business idea made intuitive sense. In December 2015, the company raised $2 million (Rs 13.3 crore) in its Series D round of funding from investors that included HDFC, Tata Consultancy Services and Faering Capital. Kumar, who was a rising star at HDFC before joining Intelenet, also recalls Deepak Parekh, HDFC chairman and Aditya Parekh’s father, being equally enthused about the idea. “He immediately said: ‘This is good for the country’. He didn’t even think of the returns. But I told him it’s a profitable venture, not a charitable one.” And so far, it’s looking good. The company is on the verge of breaking even this year.

“It’s not very easy to size some of the segments in sport,” says Jaideep Ghosh, partner and head, transport, leisure and sports, KPMG India, a business advisory firm. The training segment of the sports market, for instance, may be very small in terms of revenue, but it can have a large impact. “You could have badminton champions coming out of a certain academy in Hyderabad,” says Ghosh. “Their revenues, compared to a corporate entity, may not be very much, but the impact they have in terms of creating world champions is high.” What can be sized is the Indian sponsorship market which, according to the 2016 CII-KPMG report on the business of sports, stood at about Rs 5,190 crore in 2015. And coupled with the potential value of India’s sports infrastructure market, which the report estimates at Rs 80,000 crore, sport in India looks set to wield an increasing amount of economic heft.

And KOOH Sports has plans to make the most of it. With its programmes in place, a team of about 400 coaches and experts connected through a sophisticated back-end system, and a fresh round of funding, the company is on an expansion path—it plans to expand to several South Asian nations as well as the Middle East. “The idea of international expansion is to create pathways for our kids and also attract international technical talent to boost our overall existing platform,” says Patel.

And there’s more in the works—perhaps what could be its most potent source of revenue. “The natural progression for us will be setting up minor leagues for these sports,” says Srinivasan. With several major leagues like the Indian Premier League, Indian Soccer League and Indian Badminton League already in place, he believes it’s only a matter of time before a minor league ecosystem becomes viable, since such ecosystems work as feeders for the major leagues. With its own end-to-end ecosystem, and a pipeline of coaches that already numbers about 5,000, KOOH Sports would be prepared for that seemingly inevitable development.

For now though, it needs to contend with the basic, societal and institutional challenges that have long plagued sport in India. The tussle with schools’ intent on maintaining the status quo continues. “On a scale of one to ten, the friction may have been at 10 three years ago; now it’s at about 5-6,” says Srinivasan. Large parts of the country’s sporting infrastructure, ranging from large stadia to village grounds, remains underutilised. KOOH Sports also plans to increase the number of coaches from 400 to 1,500 in the near future, which will make quality maintenance a significant challenge.

However, Srinivasan believes that with their BPO experience of creating teams that number well into the thousands, the management team is equipped to take these on. As for India’s sporting troubles, they believe they’re doing what’s important. And they’re doing it early. “If you look at the whole message around the Olympics,” says Gloster, “it was that it’s too late to try and create an athlete in their teens. You’ve really got to start a lot younger.”

Tweets by @forbes_india
E-learning gets a reboot with business education
Sir Richard Hadlee on T20, fighting depression and playing in India