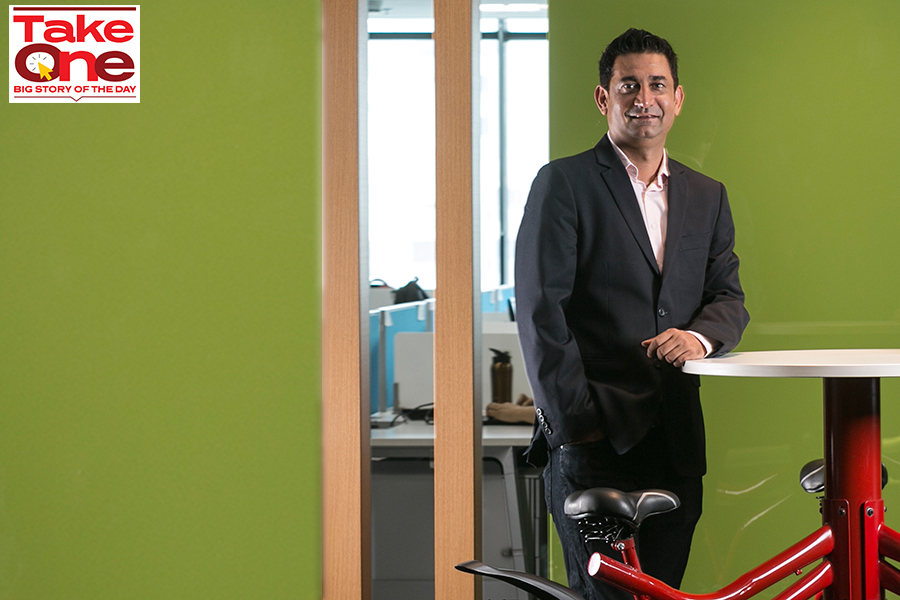 Last August, Nishant Sinha was craving ‘freedom’ in Delhi. The restaurateur—who owns Roastery Coffee House in Hyderabad and Kolkata, apart from co-founding Colocal, a bean-to-bar chocolate factory and café in Delhi-NCR—was feeling stifled. Reason: Steep commission, as high as 25 percent, charged by online food delivery aggregators such as Zomato and Swiggy. Though Sinha joined one of the platforms a few years back, he didn’t crib about the ‘tyranny’ of the aggregators largely because of the conducive environment. The food business was booming, Indians had started to step out frequently for dine-in, and online delivery was sputtering. The feast was on, and Sinha was enjoying the freedom to grow his business.

Then came the pandemic in March. The food and beverage segment got savagely battered, restaurants were forced to shut, and online delivery became the lifeline. Given the new context, Sinha was hoping for some respite from steep commissions, and sharing the discounts. Unfortunately, there was none. The business of the 36-year-old founder was badly hit. While top line flattened as outlets remained shuttered for most of the year, the bottom line kept bleeding because of the commissions he had to pay and discounts he had to share with the aggregators to lure more online orders. “The business became unsustainable,” he recounts. The pandemic turned the tables. What was once touted as salvation for food brands, online delivery started getting perceived as ‘caged freedom’, and the freedom fighters—read food aggregators—were now billed as despots. Cut to Mumbai. Tarak Bhattacharya laments the ‘heavy’ price paid by restaurant owners for the freedom of getting more business via aggregators. “Surge pricing by online delivery players created a bad impression for the brand,” laments the executive director of Mad Over Donuts, a chain of donuts across India. Aggregators, he lets on, don’t share customer data. For the brand, there was no means to know their users, their likes, dislikes, and the freedom to reach out to them directly. For Bhattacharya, there was only one faint hope: The emergence of a saviour who could break the duopoly of the big boys. During the same time in Gurugram, Shailaz Nag was fast emerging as a ‘freedom fighter’ in March. “Freedom from 20 percent commission on all orders,” screamed DotPe, an offline-to-online (O2O) platform which enables SMEs and merchants to digitise their business. Founded last February by ex-PayU founder Nag, along with Gyanesh Sharma and Anurag Gupta, DotPe offers products for setting up digital commerce stores such as digital cataloguing, discovery, deeper customer engagement tools, online ordering, payments and delivery.

The fledgling startup wooed enraged restaurant and food brand founders. The reason, though, was not to fish in troubled waters. Food and beverages (F&B) as a category, explains Nag, is the second biggest in India after grocery. “We didn’t pick up F&B to fight against anybody,” he stresses. DotPe, he lets on, is on a mission to democratise technology. “Offline businesses don’t know anything about their customer,” he points out. The merchants don’t have the freedom to either cross-sell or up-sell, which online aggregators of all kinds such as Flipkart, Amazon, Swiggy and Zomato can do on the basis of technology and data. “We are on a mission to digitise offline merchants,” he says. Whatever the proclaimed objective and professed goal, the carrot dangled by DotPe looked appealing. Promises like ‘your customers, your data’, ‘now take direct orders from your customers on WhatsApp’, and ‘own your customers and build your brand’ whetted the appetite of the disgruntled lot. What made DotPe and Nag look like ‘freedom fighters’ to restaurant owners was a bunch of strong business ideas that formed the core of DotPe. First, the service fee was charged only for the services used. And commission on transaction is in ‘very low’ single digits. Second, customer data along with insights into purchase behaviour could be accessed for free. Third, the startup took care of the dine-in customers as well, who could scan a QR code to see the menu, place the order and pay from the table. Fourth, for online orders, along with payment integration, DotPe took care of delivery as well. 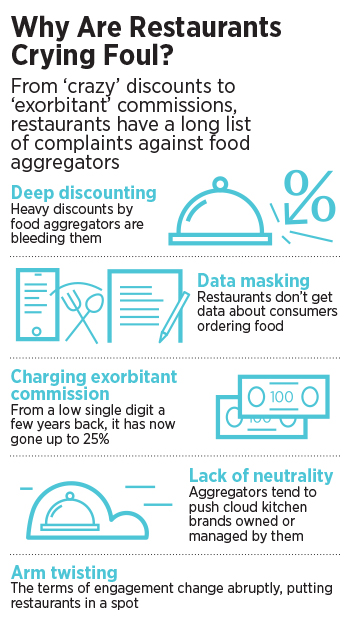 Cut to June 2021. In less than 18 months, DotPe has generated 10 million food orders and delivery for restaurants, and has on-boarded over 6.2 million offline merchants of all kinds. “We offer a complete solution for merchants,” says Nag, adding that Haldiram’s happened to be the first F&B customer to come on board last March. Now, the tech platform boasts of 20,000 restaurants, and the number is swelling by each passing day. In fact, even the biggies are jumping on the bandwagon. This week, The Lalit Hotels tied up with DotPe to get food delivered to customers. The platform (DotPe) has a strong network of delivery partners which makes the overall delivery process easy for us,” says Rocky Kalra, corporate general manager (operations and development) at The Lalit Hotels. Industry watchers are not surprised with a sharp uptick in the user base of DotPe as well as its popularity among restaurant owners. “Though DotPe is still small, it’s a clear sign of things to come for online food aggregators,” says Ankur Bisen, senior vice president (retail & consumer products division) at Technopak, a consulting firm. The writing is on the wall: The food delivery players must put their house in order or there is somebody else in town to eat their lunch. The groundswell of discontentment among restaurant owners has the potential to turn into a tsunami. Bisen explains the strong fault lines in the online food delivery business. The core of any aggregation business is trust. “The problem starts when this trust gets breached,” he says. Getting into the cloud kitchen business, which anyway proved to be a dud for aggregators, raised the red flag of conflict of interest. An ecommerce platform has to be, and is perceived to be, neutral. “The idea of decimating or bypassing restaurant brands by building a parallel business around cloud kitchens was nothing but wishful thinking,” he says. Moreover, high discounting and a near-killing commission structure made it abundantly clear that online food delivery doesn’t have a path to profitability. “What is fast disappearing from the table is not only food, but the trust,” he points out. DotPe, Bisen underlines, built its business model by observing the challenges faced by aggregators and the pain points of offline merchants. “They are nimble, they don’t cost a bomb and they are pitching themselves as a trusted partner,” he says. The food delivery aggregators need to take a hard look at themselves, and the business model. There is another strong reason to do so. Over 42 percent of online food delivery revenue comes from just the top eight cities; another 30 percent comes from 110 Tier II cities and the rest from 432 Tier III and IV cities, according to a recent data by brokerage firm CLSA. If the food delivery story goes wrong in the top cities—DotPe is still a top city phenomenon as far as food business is concerned—then aggregators would come under excessive strain. “There is acute acidity and just popping pills won’t solve it,” he says.

Back in Delhi, Anurag Katriar has been championing a magical pill to take on the might of the online food delivery biggies: Direct ordering. Last May, the National Restaurants Association of India (NRAI) partnered with DotPe to launch digital ordering solutions for restaurants. “We need to take back some control of our digital landscape from the hands of digital landlords,” says the president of NRAI, an industry body for restaurants in India. Aggregators, he fumes, are the digital landlords for all practical purposes. NRAI, he informs, has rolled out an ‘order direct’ campaign to ensure less dependence on aggregators as well as sustainable long-term business for restaurants. Over 25,000 restaurants across top cities such as Mumbai, Delhi-NCR, Bengaluru, Kolkata and Hyderabad are now part of ‘order direct’. The industry body, which represents over 5 lakh restaurants across the country, is rolling out its loyalty app in a month or so, and is also working on a delivery app. “Loyalty is earned, it is not bought,” he says, taking a dig at online food delivery players who have allegedly been offering hefty discounts to woo new users as well as retain loyalty. “The narrative that discount is the only way to get customers is the laziest narrative you can ever create,” he says. The fight between NRAI and food aggregators started, and escalated quickly, in August 2019 when the industry body rolled out a logout campaign against the allegedly predatory pricing and discounts offered by the latter for dine-in customers. Later, the campaign was extended to involve food delivery services as well. At the peak of the confrontation, Katriar professes, around 44,000 restaurants were willing to stay away from the platforms of food aggregators. “The whole delivery system is inherently flawed,” he claims. Aggregators are burning money; restaurants are losing money and the government is not getting taxes. It has only helped the aggregators in building their enterprise value. “Now we are no longer talking. We are walking the talk,” he says, alluding the move to scout for more freedom and control in dealing with customers and business. Neither Zomato nor Swiggy replied to an email sent by Forbes India. 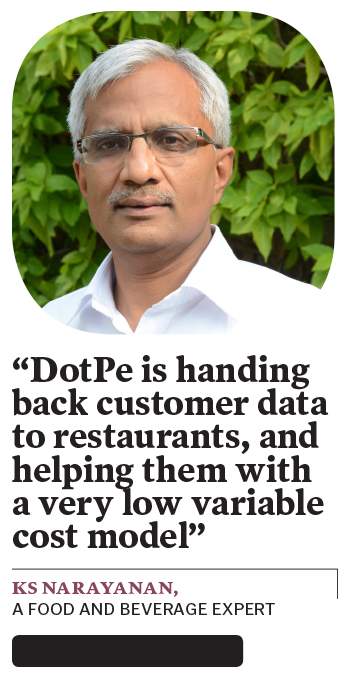 Food experts, though, don’t find the fight palatable. While conceding that restaurants have their set of grievances, they say they must also look at the context and the larger picture. Take, for instance, the average order value in India, which stands at just $4. Now compare it to the US and China, where it is $38 and $6.5, respectively. The delivery penetration in both the countries stands at 49 percent and 26 percent, respectively. The corresponding number for India is just 6 percent, points out the CLSA research report. The big food fight, especially over delivery, which is happening now could not have been imagined a few years back because the delivery market size was almost negligible. While in FY15, delivery made up just 1 percent of the food services market, it jumped to 6 percent in FY20 and is likely to be 13 percent in FY26. Earlier, when restaurants didn’t focus on delivery as a channel, aggregators provided an alternative means of reaching out to the customer, underlines KS Narayanan, a food and beverage expert. The food service market, he points out, is quite large and there is scope for multiple players to coexist. “Once the pandemic abates, we will see a more harmonious equilibrium,” he predicts. Nag, for his part, doesn’t want to be seen as an abettor or partner in the fight between the NRAI and aggregators. “I am just focussed on my mission to digitise merchants and democratise technology,” he reiterates. Offline merchants, he underlines, must have the same freedom as their online counterparts to grow and prosper. “I am just joining the dots,” he signs off.

Tweets by @forbes_india
Why family CEOs outperform their non-family predecessors
Photo of the day: 100 not out