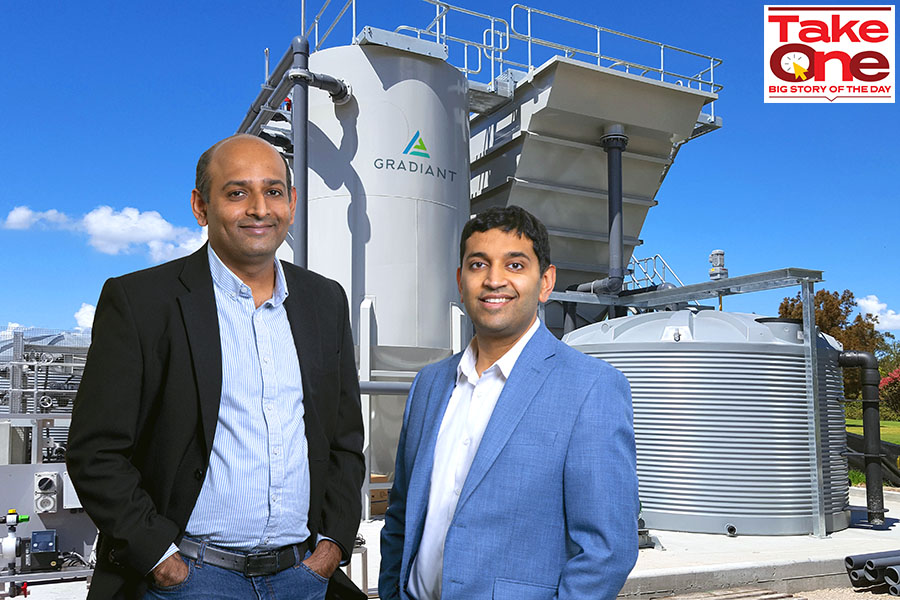 One could say Prakash Govindan’s entrepreneurial journey started when his friend Anurag Bajpayee convinced him to start a company based on his PhD research. They were both at the Massachusetts Institute of Technology. Or one could say it started with hefting bucketsful of water, growing up in Chennai, which gave Govindan the personal experience of how important a resource it is.

Fast forward some 25 years from those days in Chennai, Govindan and Bajpayee’s company, Gradiant Corp., just won $20 million in contracts to provide water treatment technologies to three industrial projects in India. The name is also a play on gradients, of all sorts, which Govindan says play a vital role in many natural and industrial processes.

The Boston-headquartered company the duo built over the last 10 years is poised for rapid growth in providing end-to-end bespoke water treatment solutions to the world’s biggest corporations—in downstream oil and gas, pharmaceuticals, semiconductor companies, and a recent foray into photovoltaic manufacturers, including in India. “Gradiant has evolved from a one-technology startup to an end-to-end water treatment solution provider,” Govindan says.

Consider semiconductors, for example. An average size semiconductor foundry consumes about 10 million gallons (37.85 million litres) of water a day. That is typically withdrawn from groundwater, which could otherwise be used for human consumption.

In the process of making the semiconductor wafers and other products, the foundries contaminate the water they use with minerals, chemicals, and various other toxic contaminants. And they produce various kinds of waste.

What Gradiant does is to treat those waste streams to return as much as 95 percent of fresh water, Govindan says. Therefore, instead of drawing 10 million gallons every day from the ground water source, the foundry needs to draw only 500,000 gallons more each day. The impact of Gradiant’s products is that they can significantly reduce the need to draw precious fresh water for industrial use.

In Taiwan, for example, home to the world’s biggest semiconductor companies, 65 percent of the water withdrawal is by the semiconductor industry. In Chile, in the Atacama province, about 70 percent of all water withdrawal is for mining. And in India, as the economy grows, industrial use, especially water taken up by the power sector, accounts for much of the incremental withdrawal, according to the International Energy Agency.

In the semiconductor foundry example, “If you can recycle 95 percent of that water within the industry, it has a huge impact on the water availability for local consumption. You can imagine the impact that this kind of circular economy can have,” Govindan says.

The lifecycle cost of water includes the cost of sourcing the water, the cost of disposing contaminated waste, and the cost of handling that water in the interim. Compared to that, “when you put a Gradiant treatment system for a chip foundry, we are typically half the cost of the existing cost of water,” he says.

In addition to technology, equipment and project development, Gradiant offers digital solutions for water treatment plants. Over the last three years, and helped by an acquisition, Gradiant has developed a product called Smart Ops, for managing data and optimizing the operations of treatment plants using machine learning and artificial intelligence.

Today, Gradiant has about 250 patents that cover about nine different technologies. About seven of those technologies are commercial, and about five of those are “advanced commercial,” Govindan says.

One innovation that Gradiant commercialised is a way to take reverse osmosis—a 60-70 year old process—and removing some of its critical limitations. They designed their product, called RO Infinity, to include a process called “counter-flow” that allowed them to deal with a natural limitation to extraction of clean water as the process leaves behind higher and higher salt concentrations in the remaining solution.

Think of it as squeezing the salt solution through a semi-permeable membrane so that the water goes through, leaving the salt behind. As more and more salt is left behind, the pressure needed to keep the process going becomes too high. The counter flow process tackles this problem, Govindan says.

The second big problem is that the salt can solidify on the physical membrane used in reverse osmosis and make it useless. Gradiant’s tech incorporated a kind of a batch processing that would flush the system with fresh brine every once in a while which significantly lowers scaling. Gradiant has some 40 patents from these two innovations, he says.

Gradiant’s flagship product comes from a process called carrier gas extraction, an area that was also the subject of Govindan’s doctoral research at MIT.

“It mimics nature's rain cycle,” he says. This is a humidification dehumidification system in an evaporator that heat to concentrate brines all the way up to saturation of salt and produces a lot of fresh water.

Gradiant’s innovation here is that the evaporator adapts to “variability,” or changes, in water quality, which makes its carrier gas extraction product much more effective, he says. The adaptive capabilities also makes it more energy friendly, he says. The evaporator needs heat, and given that energy consumption is the biggest culprit in global warming, Gradiant’s product contributes to a lower energy cost in terms of CO2 emissions as well.

As the evaporator adapts to the incoming water’s quality, “we can save at a given plant in a year, millions of tons of CO2,” he says.

Also read: Oceans saved us, now we can return the favour

Top of the Pyramid 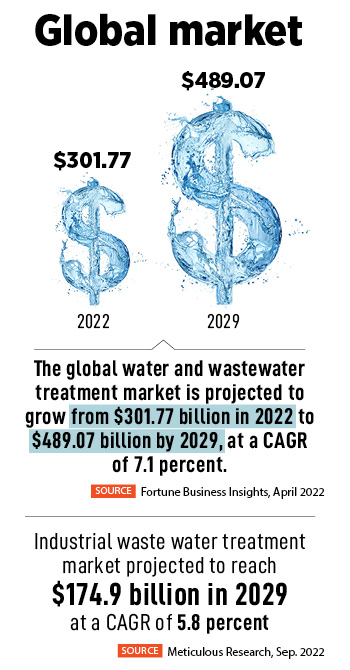 “The overall opportunity is extremely large. Within that, Gradiant focuses on the more challenging water problems, which we also feel are the most important water problems,” Bajpayee says.

Picture the water industry as a pyramid, he says. At the bottom are large volumes but simpler water to treat like sewage, wastewater, and domestic wastewater. As one goes up the pyramid, the volumes of water may get smaller, but the complexity of that water and the contamination levels in that water go up exponentially, he explains.

Therefore, not only does the complexity of treating this water go up – and the corresponding cost – but the consequences of this water getting into our environment, rivers, aquifers and oceans are much more serious and long term, and much more irreversible, he says.

This is the water that Gradiant focuses on, and it’s where the company’s technologies give it an edge, he says.

The only way to really make industrial use of water sustainable is to be able to treat most, if not all, effluents and recycle them so that we eliminate the discharge of contaminated water into our environment, and we eliminate or drastically reduce the dependence of manufacturing units on the public water supply, he says.

A recent area of interest for Gradiant is the Lithium mining sector. Lithium is a critical element for electric vehicle batteries, as the world transitions away from fossil fuel burning transportation. But the only way that happens is if there's enough Lithium to make these batteries.

And getting Lithium into various industries is also an extremely water intensive process. Therefore it’s another opportunity for Gradiant, contributing to both the environment and the economics, he says.

In October, Gradiant announced a partnership with energy services company Schlumberger to collaborate on lithium extraction. In Schlumberger’s lithium extraction process, Gradiant technology will be used to concentrate the lithium solution and take out fresh water, the companies said in a press release. “Proper natural resource management is essential in mineral production, and nowhere more so than in lithium,” said Gavin Rennick, president of Schlumberger’s new energy business.

“The unprecedented growth in demand for this critical mineral requires high-quality production without compromising sustainability. The integration of Gradiant technology into our direct lithium extraction flowsheet has been key in our strategy to improve sustainability in the global lithium production industry,” Rennick added.

“We actually started in the energy industry, in the oil and gas industry back in the day,” says Bajpayee. The company’s first customer was a smaller, independent oil company in the US. Today, “we are completely out of it,” he says.

The company’s next sales goal is to hit the billion-dollar revenue mark. And it has been adding experienced executives to get there. For example, in September, Gradiant named Govind Alagappan as its president of global operations. Alagappan brings with him experience from his years at two of the world’s biggest water companies, Evoqua Water Technologies and SUEZ.

Gradiant is also expanding its R&D team into India and Australia, in addition to getting more commercial orders.

India is becoming more important to global manufacturing as well, Govindan points out. Already a lot of drug manufacturing has moved to India. Increasingly, many other industries which are water stressed and which consume large quantities of water and which also can contaminate the environment with toxic waters and contaminated waters, will move to India, Govindan says.

Gradiant entered India in 2017, and today has about 80 employees here, of its total headcount of about 550.

Of the three projects, Gradiant recently announced in India, where it is a supplier, two are with large solar photovoltaic manufacturers and the third is for an industrial protective equipment manufacturer.

On the venture ecosystem front, “when we started Gradiant and for the first 5-7 years, I used to tell people that I was so lucky to be in Boston and at MIT because a similar venture in India wouldn't have gotten funded,” Govindan says.

Unlike India’s ecommerce app startups, this is a very capital intensive business that takes deep pocketed investors who also have an appreciation and understanding for this kind of hardware play.

Today, “change is afoot in India,” he says. There is a nascent network of entrepreneurs and investors—both foreign and local—that is developing science based hardware products. And often, the software to go with that hardware as well.

And companies like Gradiant, and Indian-born entrepreneurs such as Govindan and Bajpayee will play a bigger role in the future, in building out this network and making this ecosystem more mature.

Gradiant, for example, which currently has its main R&D centres in Boston and Singapore, is looking to expand its R&D capabilities into India and Australia.

“It is in the works already,” Govindan says. The company already has project-based R&D in Chennai and other locations in India. And it plans to set up labs in the coming year or so. This is likely to be closely located with IIT Madras, so Gradiant can tap into the cutting edge research and talent in the institute, he says.

Tweets by @forbesindia
Anand Mahindra: Rebel, leader, and master of change
Inside our W-Power 2022 issue