MangoSip Is Aiming For a Pan-India Presence 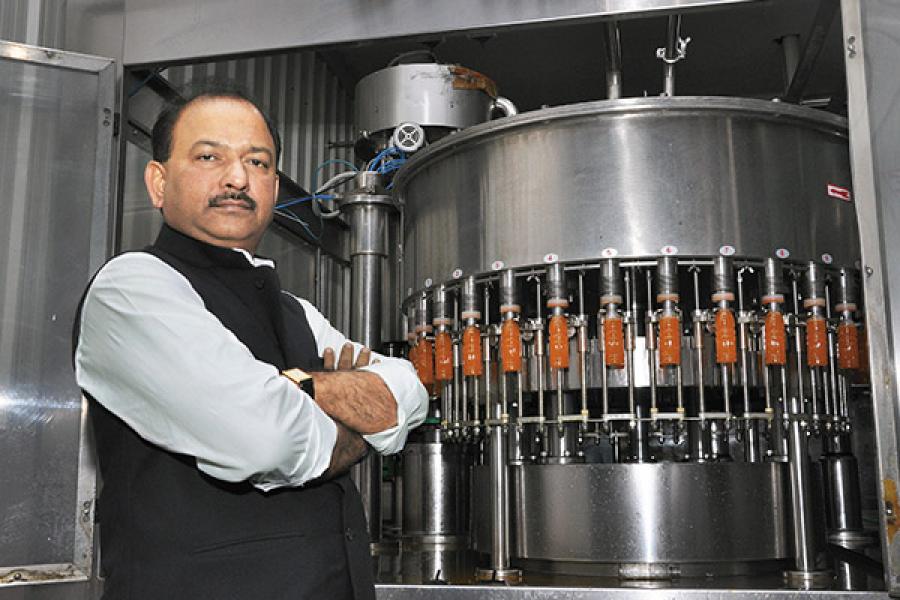 There is a thin line between complacence and confidence, and Dhirendra Singh is on the right side of it. Sure, the 52-year-old has all the chutzpah of a self-made man, but he is realistic about his business and where he stands. “I have a long way to go. This is a limitless market,” he says.

MangoSip, the brand he created, has carved out a strong second place in the mango drink market. The company says it made Rs 300 crore in sales last fiscal. But, more importantly, Singh’s parent company Manpasand Beverages has established a pan-India footprint for MangoSip. Not bad for an entrepreneur who started in 1997 and was up against the big daddy of mango drinks, Frooti.

Singh is expanding his portfolio, with Manpasand venturing into packaged drinking water—a market for which he sees huge potential.

In 2011, the private equity firm SAIF Partners picked up a 25 percent stake in Manpasand for, industry sources say, Rs 45-50 crore, with an earnings multiple of 30. “We were impressed by the fact that the entrepreneur had managed to take the business so far with very little capital,” says Vishal Sood, managing director, SAIF.

Singh’s journey is not unlike other entrepreneurs in the consumer goods space. Rising incomes, particularly in rural India, have resulted in a consumption boom. Volume growth rates for many one-brand entrepreneur-led companies have been more than 25 percent for the last five years. Snack makers such as Prakash Snacks and Balaji Wafers have grown into Rs 500 crore companies in less than 10 years. Manpasand, which arguably had a tougher ride (mango juice is seasonal, with a bulk of the demand concentrated in four months), has set itself up for a national presence. It has worked on expanding distribution and has a presence across all states.

While there are no precise numbers on the size of the market, Singh estimates it at Rs 3,000 crore with Frooti being the number one brand. MangoSip is a clear second; Slice and Maaza come next, he says. Industry observers suspect that PepsiCo and Coca-Cola, which own those brands, have slowed investments as mango drinks have lower margins than cola.

The entrepreneur’s early years were in Varanasi. At the time, a government job was the only option, says Singh, who took up a post with the petroleum department in the central government. “I barely had two hours of work in a day,” he says. Singh started dabbling in real estate in 1993, when property prices were rising. But the price correction of 1995, and slowing demand, hit the industry hard. Singh was running out of ideas.

That was when he got into the mango pulp business, by accident. Mango pulp was easily available and Singh learned that packaging and selling it would not be very difficult. But first he had to get the formula right for his drink. Singh first checked with consultants and was told that he’d have to cough up Rs 10-20 lakh just for the formula. But Singh didn’t have any capital. Instead, he asked an acquaintance—a food scientist in the UK—to email him a recipe needed for the mass production of mango drinks. When he tried it out, it tasted fine, and he decided to run with it.

Singh leased part of an old plant from Mahananda Dairy in Mumbai, where MangoSip was made, but sold it in Uttar Pradesh.

He admits it was easier for him to start because the two national players, Frooti and Jumpin, had largely ignored tier-2 and 3 cities.

Singh stumbled upon his strategy one afternoon, in 1997, while on a highway outside Gorakhpur, at a tea stall. The owner told Singh that he was not happy; some customers would drink his tea but not pay for it, although they paid for branded biscuits. This prompted Singh to set the stage for MangoSip’s entry into small-town India.

After succeeding in UP, MangoSip saw a steady expansion of distribution across India. It is now available across the country, although Singh admits that distribution in southern India is not strong. But that is expected to change with plans to set up a plant in that region within a tentative deadline of three years. Singh will also be helped by the fact that Totapuri mangoes (it is 20 percent cheaper than other varieties and forms the base of all mango drinks) is grown in Andhra Pradesh, Tamil Nadu and Karnataka, and will be closer to the new plant.

Singh’s most critical challenge, however, is still to come. As he pushes into larger cities, MangoSip will need to acquire the glitter of brand aspiration to take on the big players. Though the drink can be bought at train stations across Mumbai, customers still don’t see it as their first choice. Jagdeep Kapoor of Samsika Consultants, a brand consultancy, says, “The company will have to work at creating a brand pull.” Singh is conscious of this fact and he knows that the brand is going to need significant advertising support.

In January this year, Manpasand signed on actor Sunny Deol as brand ambassador. With a strong national presence, the company plans to up advertising spends aggressively in the next few years. “Spending money on advertising makes sense now as we have a certain size,” says Singh.

While advertising is likely to create some pull for the brand—so far it has used a push strategy—Singh plans to use his ability to borrow to get into allied consumer businesses. He can make use of the existing distribution network and sales outlets. In addition to packaged drinking water, Manpasand also plans to sell savouries. Both, he says, offer the potential to maintain these growth rates for years to come and will put the company in the Rs 1,000 crore revenue bracket in the next four to five years. That’s hardly chicken feed for an entrepreneur who started with nothing but gumption. “That and a little luck brought me this far.”