The power of ideas 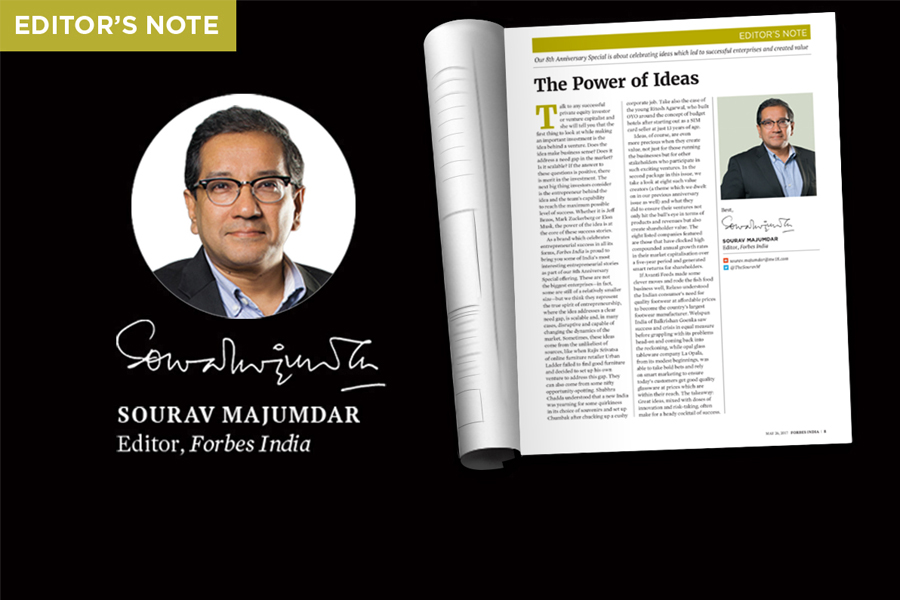 Talk to any successful private equity investor or venture capitalist and she will tell you that the first thing to look at while making an important investment is the idea behind a venture. Does the idea make business sense? Does it address a need gap in the market? Is it scalable? If the answer to these questions is positive, there is merit in the investment. The next big thing investors consider is the entrepreneur behind the idea and the team’s capability to reach the maximum possible level of success. Whether it is Jeff Bezos, Mark Zuckerberg or Elon Musk, the power of the idea is at the core of these success stories. 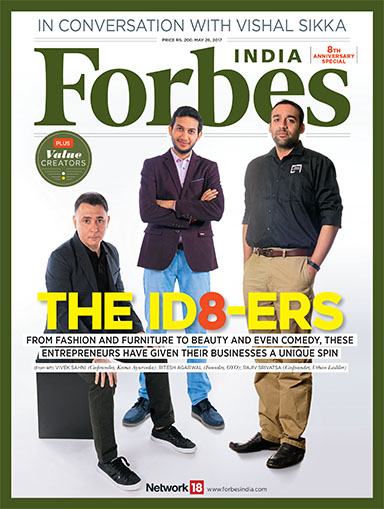 As a brand which celebrates entrepreneurial success in all its forms, Forbes India is proud to bring you some of India’s most interesting entrepreneurial stories as part of our 8th Anniversary Special offering. These are not the biggest enterprises—in fact, some are still of a relatively smaller size—but we think they represent the true spirit of entrepreneurship, where the idea addresses a clear need gap, is scalable and, in many cases, disruptive and capable of changing the dynamics of the market. Sometimes, these ideas come from the unlikeliest of sources, like when Rajiv Srivatsa of online furniture retailer Urban Ladder failed to find good furniture and decided to set up his own venture to address this gap. They can also come from some nifty opportunity-spotting. Shubhra Chadda understood that a new India was yearning for some quirkiness in its choice of souvenirs and set up Chumbak after chucking up a cushy corporate job. Take also the case of the young Ritesh Agarwal, who built OYO around the concept of budget hotels after starting out as a SIM card seller at just 13 years of age.

Ideas, of course, are even more precious when they create value, not just for those running the businesses but for other stakeholders who participate in such exciting ventures. In the second package in this issue, we take a look at eight such value creators (a theme which we dwelt on in our previous anniversary issue as well) and what they did to ensure their ventures not only hit the bull’s eye in terms of products and revenues but also create shareholder value. The eight listed companies featured are those that have clocked high compounded annual growth rates in their market capitalisation over a five-year period and generated smart returns for shareholders.

If Avanti Feeds made some clever moves and rode the fish food business well, Relaxo understood the Indian consumer’s need for quality footwear at affordable prices to become the country’s largest footwear manufacturer. Welspun India of Balkrishan Goenka saw success and crisis in equal measure before grappling with its problems head-on and coming back into the reckoning, while opal glass tableware company La Opala, from its modest beginnings, was able to take bold bets and rely on smart marketing to ensure today’s customers get good quality glassware at prices which are within their reach. The takeaway: Great ideas, mixed with doses of innovation and risk-taking, often make for a heady cocktail of success. 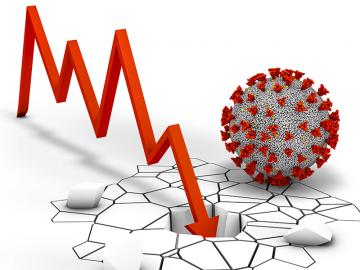