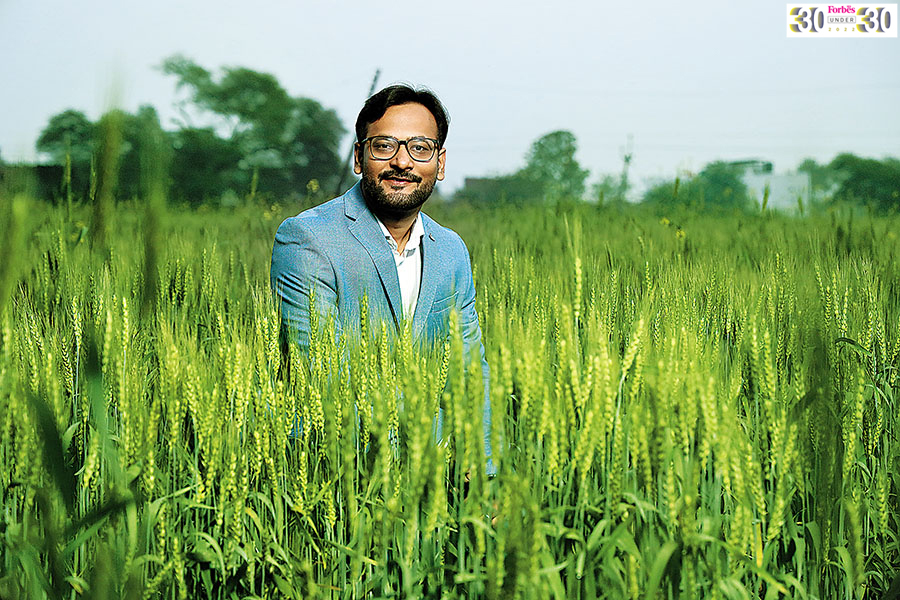 Harshit Gupta
Co-founder, Gramophone
Gramophone grew 3x in revenues, doubled its team, and closed a series B round of $10 million in October. It works with farmers, helping them with advice and information about crop cycles and solutions to other agricultural problems to make farming more efficient. Despite the challenges of the lockdowns, its post-harvest business, which it started only last year, has also seen good growth, claims Harshit Gupta.Forbes India Impact: “Whenever my vendor partners, like manufacturing companies who supply us products, see our name in Forbes India, our credibility increases and they are more eager to partner with us. The same goes for investors and customers.”

Keerthi Reddy Kotta
Co-founder and COO, StaTwig
Over the past year, StaTwig forged partnerships with companies, including Tech Mahindra and GMR Hyderabad Air Cargo, among others, to track vaccine supply chains. VaccineLedger, the company’s signature offering, allows end-to-end tracing of vaccines from manufacturers to end customers, providing tracking ability to all stakeholders through blockchain, recording, and providing real-time tamper-proof data to improve transparency. Forbes India Impact: “It opened a lot of doors for StaTwig. We grabbed a lot of interest from various pharmaceutical companies, government departments, venture capitalists and channel partners. Forbes India has put our startup on the roadmap for greater success.” Mudit Dandwate and Gaurav Parchani
Co-founders, CEO and CTO, Dozee
Over the past year, Dozee has seen its team strength grow by four times, and has expanded its solutions to 25 cities. The company also raised $16 million, and intends to develop and launch new products in addition to partnering with over 1,000 hospitals across India to help them upgrade critical care infrastructure through remote patient monitoring. Forbes India Impact: “Making it to the Forbes India 30 Under 30 is a great validation that we are moving in the right direction. It keeps us true to our purpose and motivates us to do more.” Mukul Rustagi and Bhaswat Agarwal
Co-founders, Classplus
In the past year, Classplus enabled a digital identity to over 100,000 educators and content creators who are using apps powered by the platform to reach more than 25 million students across 3,000-plus cities around the world. Forbes India Impact: “An honour like this reminds us that we are on the right track and inspires us to keep working towards our mission of empowering educators through technology with even more zeal,” say the co-founders. Niharika Kapoor
APAC lead, Shorts Scaled Partnerships, YouTube Shorts
If power brings in responsibility, recognition doubles it. That’s the story of Niharika Kapoor. Late last year, opportunity knocked on her doors when she was asked to lead the newly launched YouTube Shorts team for APAC (Asia-Pacific), which is a big focus for YouTube globally. Kapoor embraced the new role and the challenge to nurture the Shorts community and build Superstars. “From being India’s youngest to the youngest lead in APAC, excited for 2022 and beyond,” she beams. Forbes India Impact: “It strengthened the belief in my abilities to take on new challenges and expanded responsibilities.” Priyanka Das Rajkakati
Co-founder and GNC engineer, The Exploration Company
In 2021, Priyanka Das Rajkakati won the Karman Fellow award for space, finished her PhD and co-founded The Exploration Company, a startup that aims to build a lunar space vehicle. She also continued her work as an artist, taking part in a few artist residencies and exhibitions, as well as supporting the Moon Gallery initiative which will be flying to the ISS (International Space Station) in a few months. Forbes India Impact: “Being able to be productive in the midst of a global pandemic implies a lot of privilege. The Forbes India 30 under 30 provided me that privilege during a rather difficult year, helping me stay motivated and opening several doors for collaborations.”

Aaquib Wani
Founder and creative director, Aaquib Wani Design
For AaquibWani, it was a year of diversifying into architectural and interior spaces with three experiential stores being constructed and designed from scratch. Apart from this, many unique branding projects which pushed the realm of graphics along with three Tedx talks, designing shoes for cricketer Rohit Sharma and designing the Real Kashmir FC jersey were some of the highlights of 2021. Forbes India Impact: “Being featured in Forbes India is a dream come true. Being self-taught, the backing of something this big has given me more confidence and brought with it a kind of legitimacy to our practice which sits well with more clients.” 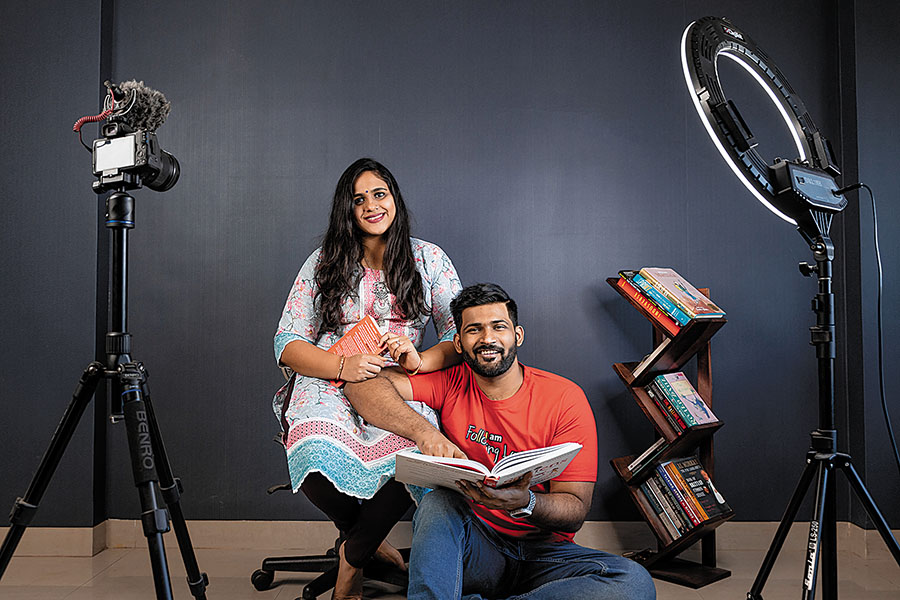 Abhiraj Rajadhyaksha (right) and Niyati Mavinkurve believe in positive content
Image: Arpit Jain for Forbes India
Abhiraj Rajadhyaksha and Niyati Mavinkurve
Digital content creator
The duo hit a new milestone by reaching 2 million subscribers on YouTube last December. In 2021, they also released a YouTube video to fight blood cancer, inspiring 25,000 people to register as stem cell donors. They even managed to raise funds to rehabilitate the victims of the Uttarakhand floods. Recently they were featured in a book on digital creators titled Booming Digital Stars. Forbes India Impact: “When we started our journey, people told us positive content has no scope, and nobody will care. That’s why having a stamp of recognition from Forbes India about our content and vision is so special. It has encouraged us to do bigger and better things,” says Rajadhyaksha. Akash Sinha
CEO and co-founder, Cashfree Payment
The digital payments firm had a hectic year as it hired for leadership roles across engineering, product management, strategy and growth teams. In June 2021, it raised an undisclosed amount from the State Bank of India, valuing the firm at around $200 million. This is the fifth round of capital raising for the firm. It now leads the bulk payouts markets and caters to over 1 lakh merchants across industries. It has served over 120 million bank accounts. Forbes India Impact: “I believe we are on the right path as this recognition from Forbes India is a validation of our efforts and the result of our hard work.” Amandeep Panwar and Rishabh Choudhary
Co-founders, CEO and CTO, BharatRohan Airborne Innovations
Though the last two years have been challenging, they have entered two new geographies—Rajasthan and Gujarat—and have on-boarded more than 2,000 farmers. The startup has invested in improving its drone/UAV-based spectral imaging technology to offer alerts and forewarning to seed spice growers as well incentivise them for pesticide residue-free cultivation. Forbes India Impact: “Being listed on Forbes India 30 under 30 has helped us build credibility and trust in the industry. Moreover, it has helped us get recognised by potential partners, investors and other stakeholders,” says Panwar. Ashish Chanchlani
Digital content creator
He became the second Indian YouTuber to cross more than 27 million subscribers on his channel, Ashish Chanchlani Vines. In 2021, he completed seven years of content creation and has experimented with multiple formats of producing funny, relatable content, including a short film called Aakhri Safar. Chanchlani’s videos in 2021 had an increased focus on highlighting social messages. An avid Marvel fan, he also represented India at the premiere of Spiderman: No Way Home. Forbes India Impact: “Being featured on the list is one of the biggest achievements of my life. It’s the most precious feather added to my cap. It has motivated me and my team to work on content that is not just entertaining but also has subtle social commentary.” 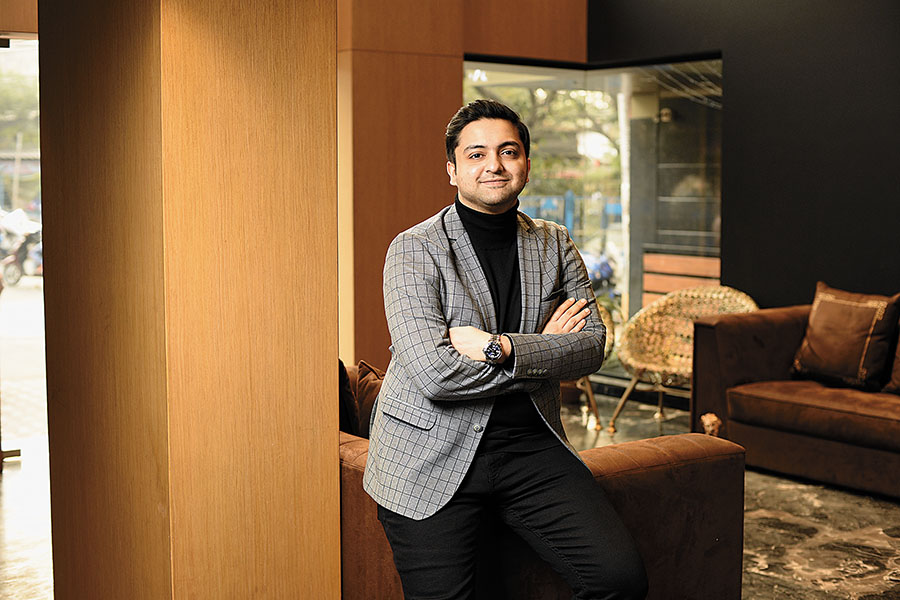 Aurko Bhattacharjee, director, CXO Office, Oyo Hotels & Homes has moved to Europe
Image: Debarshi Sarkar For Forbes India
Aurko Bhattacharjee
Director, CXO Office, Oyo Hotels & Homes
Since featuring on the 30 Under 30 list, Aurko Bhattacharjee has moved from India to the UK to lead key supply growth initiatives for Oyo’s European vacation homes. He has also set up foundations for pilot projects targeting new revenue streams. Additionally, he has supported defining the organisation’s ESG matrix and medium- to long-term sustainability goals. Forbes India Impact: “It’s a great recognition for the value I have been able to create so far and has reinforced a sense of enthusiasm to continue pushing boundaries. It’s helped me distinguish myself within my field and hence magnify reach and impact. At a personal level, it feels you can achieve anything.” 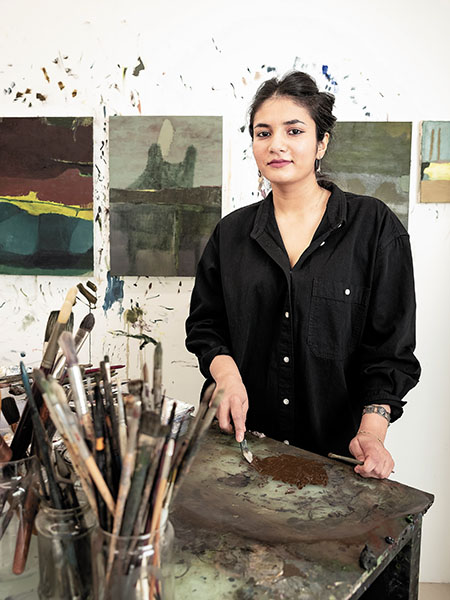 Biraaj Dodiya’s works were showcased at
several prominent galleries
Image: Arpit Jain for Forbes India
Biraaj Dodiya
Artist
The last year was active and creatively charged for Biraaj Dodiya. She continued her painting and sculpture-based visual practice, and participated in group exhibitions with prominent Indian galleries—Experimenter, Kolkata and Vadehra Art Gallery, New Delhi, says Biraaj Dodiya. Her work was shown at several important art fairs around the world, in Art Dubai, Frieze New York and Art Basel, Switzerland. Forbes India Impact: “Being included in the 30 Under 30 list opened up my work to new audiences, people who don’t necessarily come from the creative world. This has sparked new conversations, which is important for an artist,” she says. Ishaan Preet Singh and Mikhil Raj
Co-founders, FrontRow
In 2021, FrontRow continued to add courses from experts in multiple categories, and raised more funding too. Started two years ago, the company raised $14 million in series A funding led by Eight Roads and GSV Ventures, the Bengaluru startup announced in September 2021. Lightspeed India and Elevation Capital joined in as well. Early investors include actress DeepikaPadukone’s family office. Karan Torani
Founder and creative director, Torani India
The year 2021 was nothing short of a roller coaster ride for the label. The biggest leap was the move of the production unit to an area spread over 24,000 sqft, six times larger than the previous working space. The team strength increased from 120 to 200, and very senior job roles like business head, ecommerce head and production heads were added. However, these coincided with the second wave of Covid-19 and they had to close down for two months after the shift in April and restart in June. Forbes India Impact: “Being featured in 30 under 30 empowers you in a social setting where people acknowledge your perseverance. But for me it has been a personal reminder to never give up… of a self-check on my own strength moving forward.” 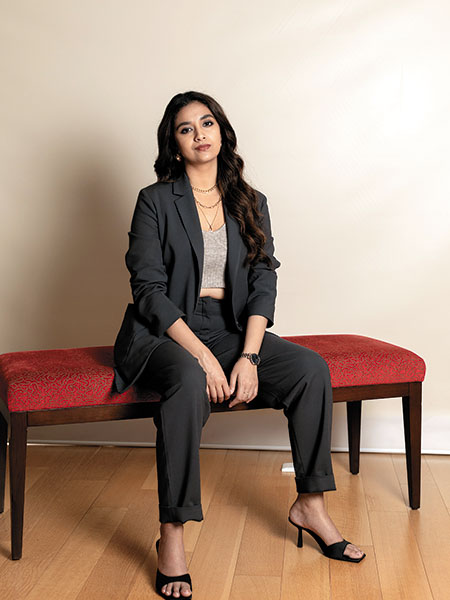 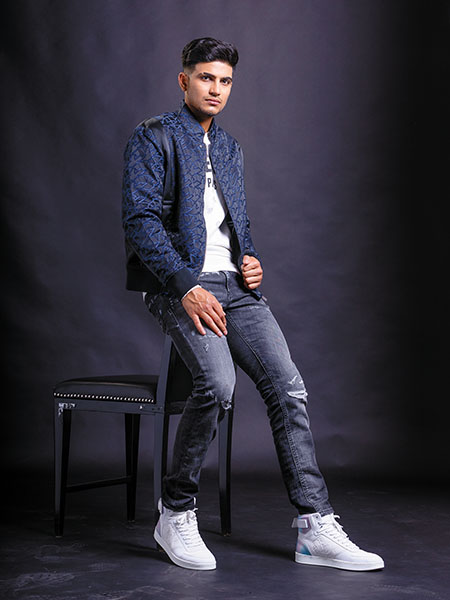 Cricketer Shubman Gill has had a mixed year
Image: Mexy Xavier; Jacket: Emporio Armani All-Over Logo Bomber Jacket
Shubman Gill
Cricketer
For the young batter, 2021 was a year of injuries—one forcing him to return from the series in England and another keeping him out of the year-ending away series against South Africa. In between, he’s shown occasional flashes of brilliance with two Test 50s and a few nearly-theres, even though his overall performance would be somewhat underwhelming compared to his head-turning Test debut during India’s historic 2020-21 series win against Australia. But, while that century still eludes Gill, given his class and temperament, it could only be a matter of time. Triptii Dimri
Actor
She became one of the first actors to join filmmaker Karan Johar’s new venture, Dharma Cornerstone Agency, which promotes budding talent. Her upcoming projects include the Netflix film Qala alongside Babil I Khan and Swastika Mukherjee, and Animal, directed by Sandeep Reddy Vanga and starring Ranbir Kapoor.