Satyajit Das: Is this stagnation or something worse?

The signs of breakdown are evident. Actual market volatility has increased and the failure of existing policies is pushing central banks into taking extreme and desperate actions 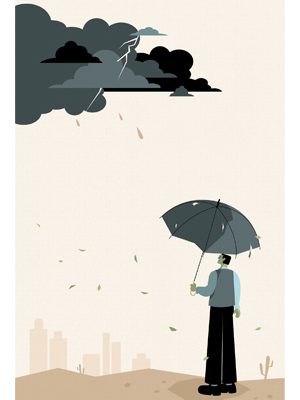 There are now three possible scenarios for the global economy and financial markets. The first is the Lazarus economy, where the strategies in place lead to a strong recovery.

Such an outcome, though, is unlikely. The fact that current policies have not led to a recovery even after eight years since the 2008 crisis suggests that they are ineffective. A general lack of demand combined with demographics, slower improvements in productivity, reduced rates of innovation, resource constraints, environmental factors and rising inequality are likely to constrain growth. Overcapacity, technological improvements, competitive devaluations and lack of pricing power are likely to keep inflation low, despite loose monetary conditions.

Policymakers do not have instruments to deal with the identified economic weaknesses. Politically, the changes required are difficult, as they need a root-and-branch structural reform of labour markets, tax systems, welfare systems and the role of governments in economies. Income and wealth distribution issues must be addressed. The entire model of debt-driven consumption and investment in a highly-financialised economy requires radical overhaul. Given vested interests that are resistant to change, it is unlikely that the required changes are feasible.

Financial repression becomes a constant with nations transferring wealth from savers to borrowers through negative or increasingly nominal real rates, to manage the economy. Competition for growth and markets drives beggar-thy-neighbour policies, resulting in slowdowns in trade and capital movements. While there are variations between nations, overall, the global economy becomes zombie-like, with entire nations, businesses and households trapped in a low-growth, over-indebted state essentially on permanent life support. Resource allocation breaks down with more and more wealth trapped in low-returning or unproductive activity.

Authorities may be able to use policy instruments to maintain an uneasy equilibrium for a period of time. But it will prove unsustainable in the long run. The ability to finance governments and stresses on central banks from excessive debt monetisation will ultimately constrain such strategies. In addition, asset price inflation and the growing debt burden, encouraged by low rates, will create dangerous financial instability.

The response of electorates to the reduction in living standards by stealth places political limits on this approach. Ultimately, a major correction may become unavoidable as confidence in policymakers’ ability to control the situation starts to diminish.

The final scenario is the mother of all crashes. Financial system failures occur as a significant number of sovereigns, corporates and households are unable to service their debt. Defaults trigger problems in the banking system, which lead to a major liquidity contraction that in turn feeds back into real economic activity. Falls in employment, consumption and investment drive a severe contraction. Concerns about safety and security of savings create capital flight from vulnerable nations, banks and investment vehicles. The process continues in a series of iterations of increasing intensity.

Staying Positive
Some historians view World War II as a continuation of World War I with an interval. Likewise, any new crisis is likely to be the next phase of the 2008 crisis, reflecting the fact that the causes remain largely unresolved.

The world is remarkably sanguine about the increasing risk of a new major crisis, which is not priced into markets. In April 2015, former vice chairman of the Federal Reserve Alan Blinder presented a novel argument against increased risk in his Wall Street Journal opinion piece. He argued that despite central bank activism, none of the hypothesised financial hazards had surfaced. In effect, the absence of a crisis to date must mean that there was no risk and the policies were correct.

Governments and central bankers assume that they can control events. Investors believe that authorities can implement measures that support the economy and asset prices. This faith may be misplaced.

Unwinding of the unsustainable excesses will be especially painful, much worse than 2008 for a variety of reasons.

First, the problems in 2016, such as debt levels, are much larger.

Second, the problems are now global with both the developed and emerging markets affected. In 2008, the emerging markets acted as stabilisers to the weaknesses of developed markets, provided demand and also helped in financing budget deficits in advanced economies.

Third, the downturn will be exacerbated by the limited capacity of policymakers to respond. Fiscal measures are limited by poor public finances. Monetary policy may be used, with more money being pumped into money markets but with increasingly diminishing effects.

The stabilisation since 2008 has been the result of fiscal deficits in combination with lower interest rates and QE. In the US, rates were lowered from 5.25 percent to zero, injecting around 20 percent of income into the economy. This boosted economic activity and crucially avoided widespread defaults and the collapse of the banking system, ensuring the recession was short. The global pattern was similar.

Today, strained government finances mean that running budget deficits on the scale that was done after 2008 will be more difficult. The fact that rates are much lower, in some cases negative, means that further monetary measures will be far less effective. In many economies, it is not clear why, with loan demand weak, banks will sell government bonds to central banks to receive negative returns on the cash proceeds. New initiatives (more unconventional measures), negative rates and ‘helicopter money’ may disappoint. Under current conditions, monetary policy will prove ineffective, the equivalent of John Maynard Keynes’s ‘Pushing on a String’ (a situation where even loose monetary policy cannot entice consumers into spending more money).

Fourth, the problems will be accentuated by political stresses. Poor economic growth and high unemployment, especially youth unemployment, in Europe have created a volatile political environment. With existing political elites seen as captured by businesses, banks and the wealthy, electorates are turning to populism and political extremes in search of representation and solutions. The resulting policy uncertainty and inconsistency further suppresses recovery.

Finally, the geopolitical situation has deteriorated sharply. The Middle East is characterised by tribal and inter-faith conflict, with the chaos and extremism spilling out from the region. A revanchist Russia threatens a new cold war. Disagreements within the European Union complicate the security situation. In Asia, territorial tensions centred upon China’s claims are rising. Increasing defence readiness or militarism, depending on interpretation, is another factor impinging global growth. Even if direct conflict is avoided, sanctions and other forms of economic or cyber warfare will complicate matters.

Unfavourable Balance
The balance between the benefits and risks of intervention is now unfavourable.

With real activity unresponsive, the unintended financial consequences of monetary experiments on an unprecedented scale are unpredictable. The decision by the Swiss National Bank to remove the ceiling on the Swiss Franc highlights the uncertainty. In Japan, emerging differences between the government and the central bank over policy show the increasing tension. The negative response to negative interest rates is another case in point.

The risk of policy errors or poor execution, such as premature increases in rates, or withdrawal of liquidity support, is increasing. An intended or accidental breakdown within the eurozone potentially triggering a restructuring of the European single currency is no longer inconceivable. Global economic wars, entailing barriers to trade or capital movements as well as the ongoing currency devaluations, are likely as countries act independently consistent with their national interests.

The signs of breakdown are evident. The failure of existing policies is pushing central banks into more extreme and desperate action, such as negative interest rates (effectively paying people to borrow) and large currency devaluations. Actual market volatility has increased as valuations reflect anticipated central bank actions rather than fundamental values. For example, the fall in the yield of sovereign bonds reflects expectations of central bank purchases rather than true risk.

Deflationary pressures in commodities and industrial prices are increasing globally. Behaviours now are economically irrational. The magnitude and speed of adjustment in commodity prices, currencies and credit markets suggests that the correction may occur more quickly than people anticipate.

Most investors remain oblivious assuming that the risk is in the price, or that they are prepared, and will be able to adjust their portfolio in time. They remain long risky assets, often on a leveraged basis.

Reconciling the performance of financial markets with the continuing problems of the real economy requires perverse reasoning with one analyst entitling a piece: ‘I’m so Bearish, I’m Bullish… Memo to self: Always buy stocks & credit on a negative [growth].’ In his December 2014 letter to investors in the Eclectica hedge fund, founder Hugh Hendry confessed that he had no choice but to behave as if the things he truly believed in were now irrelevant. He was buying risky, overpriced assets, fully aware that those valuations could not be supported and that it would all end in tears. US fund manager Doug Kass summarised the dilemma with accuracy when he tweeted: “If you’re bullish and wrong, you are just wrong. If you’re bearish and wrong, you’re unemployed.”

Coffin Corner
Aviators fear ‘coffin corner’. The term refers to the minimum speed needed to avoid an aircraft stalling and losing altitude, potentially resulting in a fatal loss of control. The aerodynamics of modern aircraft means that the difference between minimum speed (below which the plane can stall) and maximum speed (beyond which it also loses control and potentially breaks up) is small especially at high altitudes.

Today, financial markets and the global economy are flying at coffin corner. Unexpected turbulence, or instability, whatever its source, will result in a major breakdown with the rapid spread of losses and problems.

(This is the concluding piece in a three-part series) Satyajit Das is a former banker whose latest book, The Age of Stagnation, was released in India in January 2016

Tweets by @forbes_india
Verifying India's urban poor to a better place
Amsterdam: A city straight out of a fairytale