Motofumi Shitara, chairman of Yamaha Motor India Group Companies, talks to Forbes India on the two-wheeler-maker's connected mobility solutions, its quest for 10 percent market share by 2025, and why EVs are the future 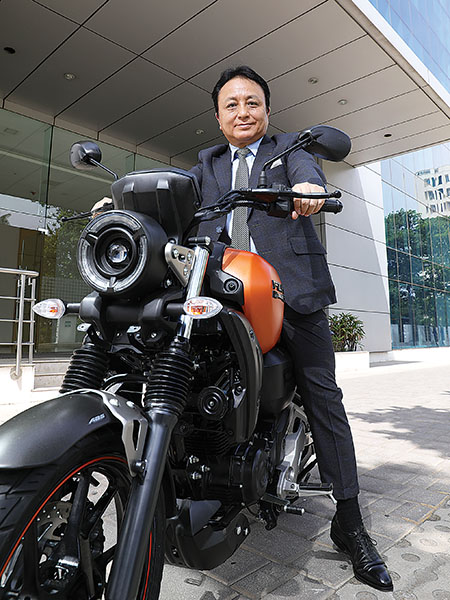 Although the company holds a 3.6 percent share in the two-wheeler market in India, the last year has seen it register significant growth. In July 2020, the company had a 4 percent year-on-year growth, which rose to a 33 percent year-on-year by December. Between January and March 2021, Yamaha registered total sales of 156,880 units, which is 14 percent higher than the same period last year.,

Motofumi Shitara, chairman of Yamaha Motor India Group Companies, speaks to Forbes India about how the company aims to gain a 10 percent market share by 2025. A 34-year veteran of Yamaha, he talks about the journey of the brand in India, the evolving preferences of its customers, and the motorcycle categories that can turbo charge the company’s growth in the country. Edited excerpts:

Q. When Yamaha Motor India was established in 1985, the Indian market was different from what it is today. What was the company’s vision in India at that time?
Yamaha’s vision since its inception has been to provide its customers with an enriching experience that revs their hearts and eventually makes them fall in love with the brand. The goal was to develop products that ignite the passion of riding with fun and joy. Our approach during that time was to offer products that are technologically advanced, economical, powerful and rich in style. The focus, though, was more on the commuter segment, as we were aiming to serve the commuting needs of families and young riders alike.

Q. How has the company’s journey been in India in these 36 years? How has the Indian two-wheeler market and consumers evolved over this period?
The company enjoyed immense success from the 1980s to 2000 with exciting two-stroke offerings. Yamaha introduced several products, including the RX 100, RXG, RX 135, RXZ, Crux, etc. These models transformed the riding culture in India. We can proudly say that Yamaha was a game changer in that period as Indian consumers gradually began shifting their preferences to products that were technically advanced and performance-oriented.

In 2000, India 2000 (equivalent to Euro I) emission norms were implemented and production of two-stroke engines was phased out, with the birth of four-stroke performance and technology. In August 2001, Yamaha Motor India became a 100 percent subsidiary of Yamaha Motor Co Ltd, Japan (YMC). Following this undertaking, Yamaha launched several models, which included the Enticer, Fazer, Libero, Gladiator, etc, keeping its core DNA focussed on young customers. It was also setting the ground for introducing the company’s international range of motorcycles in India.

In 2008, we launched YZF-R15 to kickstart the motorsport tradition in India. This was followed by the launch of the FZ series, which has been dominating the segment ever since. In 2012, Yamaha entered the scooter category, by launching Ray. The overwhelming response to it led us to launch Ray Z. Thereafter, Yamaha tried to establish itself as one of the prominent brands in the scooter category with Fascino, and the sporty Ray ZR and Street Rally. Among premium sports motorcycles, we launched the MT-15 in 2019.

Although India is a price-sensitive market, in the coming years, young people won’t mind spending an extra penny for a product that meets global standards.

India is not only the world’s largest two-wheeler market, but also one of the most diverse, where customer preferences change from one region to the other. Also, with economic development, infrastructure growth, increase in purchasing power and digital commerce, the two-wheeler industry has witnessed a massive shift in consumer behaviour in the last four decades.

India is also a young country that is digitally connected, well informed, and understands technology. They know what’s happening globally in the two-wheeler space and expect similar specifications in the models being offered in India. Although India is a price-sensitive market, in the coming years, young people are going to become more quality conscious and won’t mind spending an extra penny for a product that meets global standards.

Q. YMI holds a 3.6 percent share of the two-wheeler market in India. Are there some things that the company could have done differently to have a larger market share?
Yamaha may hold a 3.6 percent market share if you look at the overall Indian two-wheeler industry… but the company enjoys a 19 percent market share in the premium motorcycles segment (149 cc and 155 cc), which is our focus. If you study the Indian two-wheeler market, you will observe that currently 51.6 percent of total buyers are from commuter segment models. We feel this section will eventually step up and shift to the 150 cc segment.

What we have observed is that the 150 cc category has grown as an important market in the last couple of years. Gradually when higher-class products started entering, upscale buyers stepped up, while the 150 cc category continued to be an exciting class with superior commuting utilities. By 2015, it had become a new-age commuter segment for many new/first-time buyers. Today’s 150 cc class holds enormous value for both step-up customers and new riders, and Yamaha has always been a strong contender in this category.

Q. Yamaha forayed into scooters in 2014. What was the rationale behind this?
Yamaha entered the scooter category in 2012 with Ray. At that time, the Indian business was struggling, and we needed a strategy that could have helped us consolidate our position in the Indian market. We had the option to introduce a mass-market motorcycle, or a scooter; we chose the latter because the scooter segment was growing at over 20 percent annually during that period. The plan was to roll out three to four scooters across categories that appealed to young women, families and elderly people and thereby build volumes. We succeeded in our strategy and recorded an annual growth rate of 6 percent in 2012.

The demand in the scooter segment has seen a continuous increase over the last 10 to 15 years. The scooter market in India doubled between 2009 and 2012, tripled by 2014 and continued its growth momentum till 2018. Although overall growth fell in 2019, we are confident that the segment will witness a strong growth in future because of more young riders with aspirations of improved lifestyles.

Q. What has been YMI’s experience in its premium categories of motorcycles, and what are the plans for the future of this segment?
Yamaha has a 19 percent market share in the premium motorcycles segment in India, with iconic models such as the FZ and R15. We believe there is a huge opportunity for us in this segment as customers are stepping up from lower segments to higher ones for more excitement.

Customers now demand two-wheelers that are known for their sporty performance. Sporty commuter models like the FZ FI and FZS FI, streetfighters like MT-15, race machines YZF-R15 Version 3.0 and refined quarter-litre class like FZ 25 and FZS 25 are well-equipped to meet these aspirations.

Yamaha will continue to build a strong network and product portfolio in this segment and adopt innovative brand engagement campaigns. We will also upgrade our existing models with exciting features. For example, for MT-15, we have introduced the ‘colour order system’, wherein patterns can be created with existing colour combinations for the vehicle body and wheels. We have also introduced features and technologies like ‘side stand engine cut-off switch’, ‘variable valve actuation’, ‘assist and slipper clutch’, ‘Bluetooth-enabled Connect X Application’, etc. We will also be introducing connected mobility solutions.

To achieve this target, Yamaha’s strategy is to strengthen its product portfolio in the 125 cc scooter segment, and 150 cc and 250 cc motorcycle segments. Along with a strong product line-up that meets the aspirations of young customers, we want to set up premium retail outlets called ‘Blue Squares’. The theme and design of these showrooms are inspired by Yamaha’s impact in the world of motorsports with ‘Blue’ characterising the brand’s racing DNA, and ‘Square’ defining a common platform where customers can get information on their favourite products, explore the wide range of Yamaha accessories and apparels, and exchange their thoughts.

In addition to this, we will continue to reach out to new customers under ‘The Call of the Blue’ brand, which will emphasise the digital medium to promote our brand in the metros and surrounding districts. We started 2021 by organising on-ground campaigns to enable new customers to test-ride our products and learn about their features. However, due to the ongoing pandemic, we have postponed these.

Q. How do you see the two-wheeler market in India evolving over the next few years, especially with the introduction of electric scooters and motorcycles?
Electric vehicles (EV) are the future of the automobile sector. But this transformation depends on three key factors: Performance, price control and infrastructure for battery charging. India is a price-sensitive market, and customers are more aware of new technologies and features. In the current scenario, balancing price and customer expectations, in terms of services and offerings, will be a little challenging.

India can achieve success in this space only through a clear roadmap and stable policy. There are bigger challenges related to investments in infrastructure, charging stations, battery production and swapping infrastructure, as well as safe disposal of batteries. I feel the EV market is at a nascent stage in India and a more holistic approach needs to be adopted to ensure that this transformation is successful.