Monsoon is drawing to a close. Will the Gods show mercy on India's rain deficit? 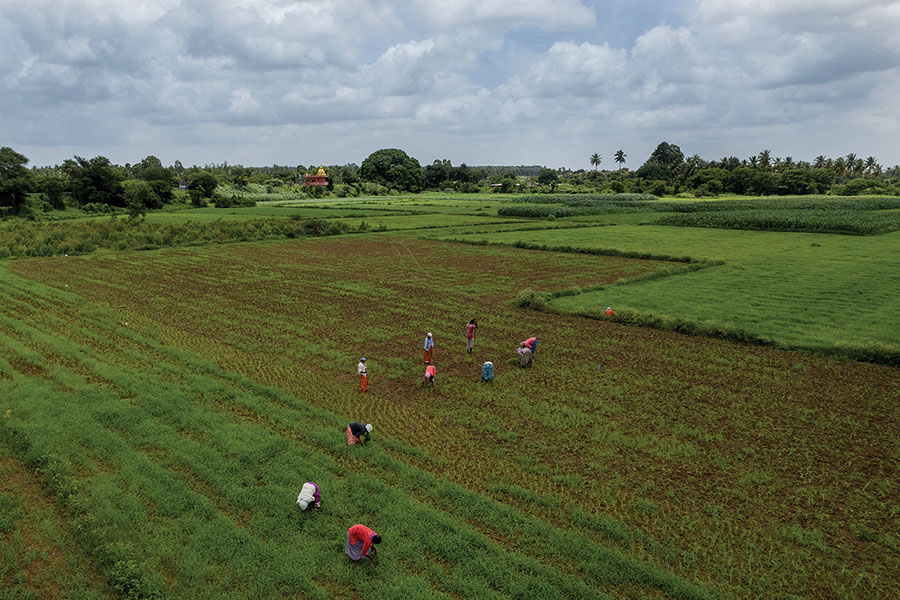 With the migration of labour from cities to villages in 2020, there was an increase in sowing in 2020-21.
Image: Manunath Kiran / AFP

With the final month of the rainy season underway, all that remains to be seen is the final deficit number the country ends up with. The country ended August with a 9.1 percent deficit.

The season started on a good note with normal June rains. July started off weakly, but recovered towards the end. But in August, things started coming apart. “This was the second poorest August we have observed since 1951, with August 2009 being the poorest,” says GP Sharma, president (meteorology) at Skymet Weather. The month recorded a 24.1 percent deficiency.

Sharma says it is unlikely this deficit can be made up in September and there will almost certainly be a below-par monsoon number. He cites the Indian Ocean Dipole, which is an irregular oscillation of sea surface temperatures in the western Indian Ocean, as the main culprit. A total deficit of 10 percent or more is termed a drought.

So far, the government has reacted cautiously to the news of lower-than-normal rainfall. Agriculture contributes to 19.9 percent of GDP, according to the Economic Survey 2020-21, and this comes after two consecutive good crops (the 2020-21 kharif and rabi crops). With the migration of labour from cities to villages in 2020, there was an increase in sowing in 2020-21. So a shortfall is unlikely to push up food price inflation meaningfully. Crisil tracks sowing for 75 percent of the country and has so far seen a fall of 1.7 percent in the area sown. “We don’t see this as a negative as it comes after three years of peak sowing,” says Hetal Gandhi, research director at Crisil. 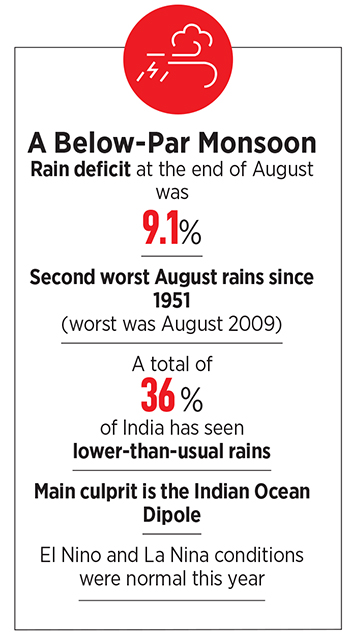 Second, in states like Punjab, Haryana, Kerala and the Northeast, lower rains matter little as irrigation systems and groundwater supplies make up the shortfall. As a result, staples like rice and wheat are unlikely to see lower production.

States and areas like west Rajasthan, Madhya Pradesh, Chhattisgarh, West Uttar Pradesh, with lesser-developed irrigation systems, have seen shortfalls. It remains to be seen how much the deficit can be bridged in September.

Two states—Gujarat and Odisha—paint a worrying picture. Gujarat has seen a 47 percent deficiency and Odisha 30 percent. Here too, farmers have adapted by shifting away from groundnut and cotton to castor, which requires less water.

Gandhi of Crisil expects large-scale government intervention if the standing crop is destroyed on account of late rains in September. Sharma of Skymet also agrees that the deficit number is less important than the spatial and temporal distribution. “When the farmer needs the rain and it happens, that is more important,” he says.