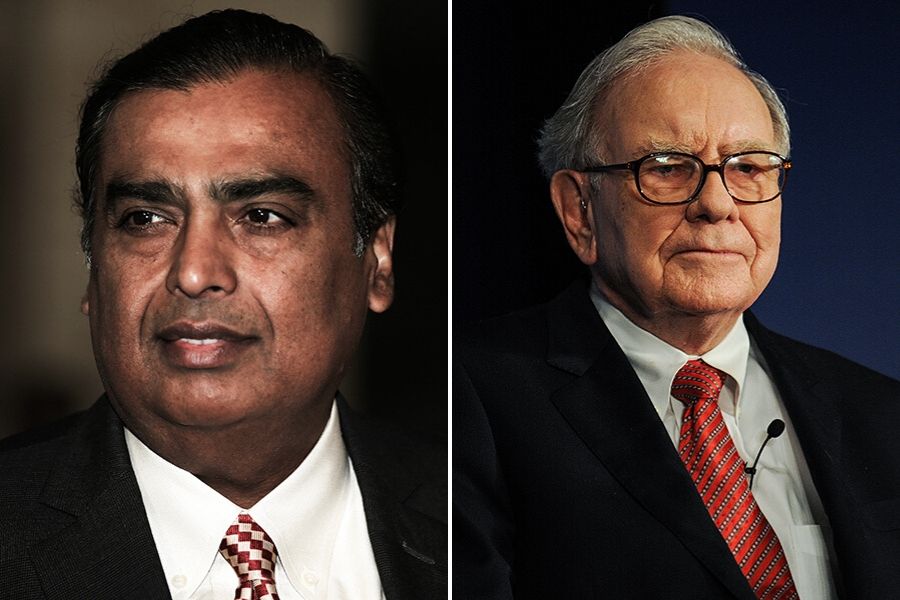 Images: Mukesh Ambani, REUTERS/Francis Mascarenhas; Warren Buffett: by Ankit Agrawal/Mint via Getty Images Nearly three months after Reliance Industries started monetising its stake in telecom arm Reliance Jio, Mukesh Ambani has moved past investing legend Warren Buffett in the world’s richest sweepstakes. Ambani, 63 with a net wealth of $70.1 billion, is now the world’s seventh richest according to Forbes real time data. He is also the only Asian to feature in the top 10, ranking ahead of Google co-founders Larry Page and Sergey Brin. Almost all the gains in Reliance Industries shares have come on account of the Rs1,17,588 crore the company has raised for Jio Platforms. Marquee investors include the likes of Facebook, sovereign wealth fund Abu Dhabi Investment Authority and private equity players KKR and Vista Equity Partners. The deals have been done at an equity valuation of Rs491,000 crore and an enterprise value of Rs516,000 crore. A sum of the parts valuation of the company values the telecom business as the one with the most potential to grow.

In addition, Reliance has also made moves to evolve as a platform company with consumers staying within the Jio ecosystem for everything from movies to education, shopping to media. Reliance Retail has launched its JioMart service across 200 cities and plans to integrate it with Whatsapp for both payments and ordering. Also expect the company to benefit from the steady erosion in the subscriber base of Vodafone Idea, which lost 3.4 million subscribers in February 2020, the last month for which data is available. Jio gained 6.2 million subscribers, taking its tally to 383 million. Warren Buffett has had a tough time so far this pandemic. He has publicly said it is better to sit on cash and come out unscathed at the end of the pandemic. Berkshire Hathaway sold its stakes in airlines—Delta, American, Sotuhwest and United—and has so far resisted doing any large deals, except a $10 billion deal with Dominion Energy, which it announced last week. Earlier this week, Buffett donated about $2.9 billion of Berkshire Hathaway stock to various charities. As the pandemic winds its way around the world and roils markets and economies, Buffett could yet emerge savvier than people have so far given him credit for.  Disclaimer: Reliance Industries is the owner of Network 18, the publisher of Forbes India