Horn OK, Please: How PumPumPum got a headstart in the used-car leasing business

The startup is making the most of the pandemic and demand for personal mobility. The challenge, though, is to stay put as it's a long drive ahead 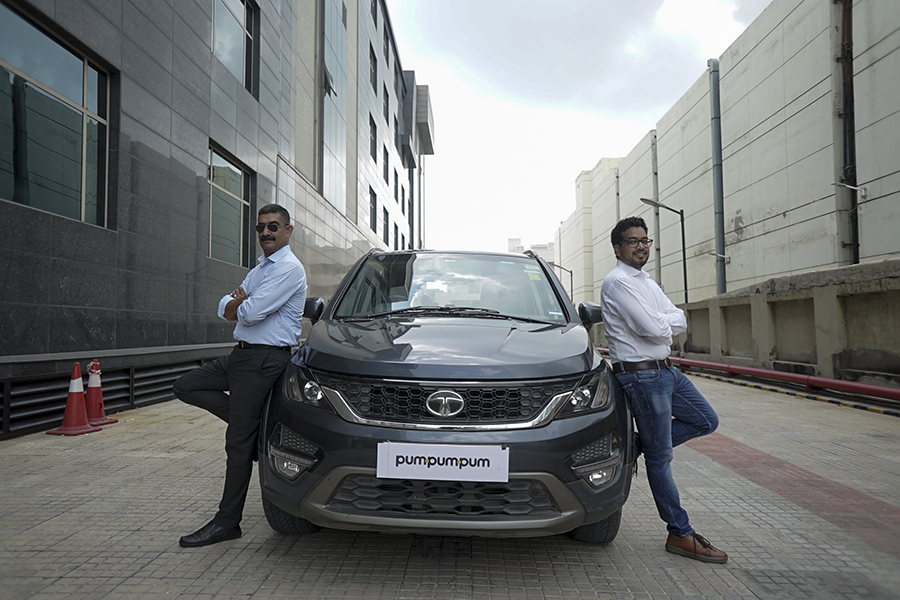 Tarun Lawadia has always been ahead of time. Well, this is what the track record of IIT-Bombay graduate suggests. In 2011, Lawadia started his career as a derivatives analyst, a profession which was largely obscure a decade ago. Three years later, he joined Chaayos as head of operations. For the tea retail chain, it was still early days. In FY15, Chaayos had a limited presence with seven outlets, and consumers were warming up to the idea of ordering branded tea. After spending over a year, Lawadia turned entrepreneur by co-founding Pluss—a mobile app for medicine deliveries—along with Atit Jain and Madhulika Pandey in June 2015.

Lawadia’s struggle with finding the ‘perfect timing’ continued. Six years ago, the concept of online delivery of medicine was niche, consumer awareness and intent to shun offline medicine stores were quite low, and scaling the business at a rapid pace was a big ask and task. Over a year later, in November 2016, Pluss was acquired by much bigger rival Netmeds. After working with the new owner for under a year, Lawadia spent another year as entrepreneur-in-residence at T9L, India’s first startup studio, again not a widespread idea. As destiny would have it, Lawadia bumped into another business venture which was much ahead of its time in 2018: Used-car leasing. While the market for used cars was growing at a healthy pace and had seen a bunch of players making a dent, used-car leasing was still at a primitive stage. What egged Lawadia in taking the plunge, though, was having Sameer Kalra as co-founder of PumPumPum, a used-car leasing startup which was rolled out in 2018, and started operations a year later. Kalra’s rich experience in leasing business—he has had stints with Clix Capital Services, Leaseplan India and Avis India—meant that PumPumPum would not only have a headstart but would also be in a better position to navigate the teething challenges to begin with. The hypothesis was bang on. The fledgling startup did have a promising start. PumPumPum posted a revenue of Rs 28 lakh in the first fiscal—FY20. Three months later, in July 2020, the startup raised Rs 2.2 crore in a seed round from Early Adapters Syndicate of LetsVenture.Sunitha Ramaswamy, president (early stage investments) at LetsVenture, explains what made the venture capital fund back the used-car leasing business. The trigger was a nascent, but strong, trend among millennials to opt for experiences over assets. “They want to experience driving a Polo. But they don’t want to own a Polo,” she underlines. What the market needed was a solution that could enable the younger generation to live their aspirations and experience them the way they like. With the leasing of used cars, the users are not paying for the erosion of the value—depreciation—in comparison to new cars. With players like Cars24 and CarDekho in the market, a layer of business can be built on top of it because some services and logistics are already present. “The user is renting a Polo instead of buying a WagonR out of his post-tax money,” she adds.PumPumPum’s initial ride, though, soon turned bumpy. The problem was not the absence of demand. “It was excess of demand,” recalls Lawadia. Why more demand turned into trouble was simply because of the business model, which was asset heavy. PumPumPum was buying used cars and then leasing them. As demand bloated, the pressure to buy more cars mounted, which in turn led to taking more debt from banks. As the inventory kept ballooning, the startup was finding it hard to break the vicious debt cycle.

Then came the pandemic in March 2020. Demand for personal mobility grew manifold, and the used-car business exploded. The leasing too picked up. The co-founders now decided to pivot: From asset heavy to asset light. The startup started on-boarding HNIs (high networth individuals), business owners and car owners as investors in terms of supplying cars. What also helped was an instant realisation among a good chunk of car owners—with multiple vehicles—about the need to have an extra source of income. The best way was to put the extra car on PumPumPum’s platform and let the startup manage the show.

The gambit worked. PumPumPum posted a revenue of Rs 1 crore in FY21, and now it is clocking a run rate of Rs 12 crore. “The pivot has worked really well for us,” claims Kalra. The plan now, he adds, is to scale up and expand to over a dozen cities in a year.

The challenge, though, remains. And it’s not coming from the likes of OEMs (original equipment manufacturers) such as Maruti Suzuki or Mahindra who are exploring the car leasing business. The biggest challenge for the PumPumPum co-foudners and its backers is to show patience.Vinay Bansal, one of the backers of the startup, explains. The new age workforce mantra, underlines the founder and chief executive officer of Inflection Point Ventures, is to lease assets like houses, consumer durables and even cars so that it keeps them detached and mobile when changing jobs or their home base. “This is the new customer segment that PumPumPum is aiming to capture,” he says. The potential, though, will be fully explored over the next five years. The co-founders, on their part, contend that they are ready to stay put. At times, staying ahead of the time could be the biggest edge only if one is willing to stay long to see the product-market fit fall in place. For PumPumPum, the journey has just started.