Priyanka Kanwar and Prabhtej Bhatia have found high-growth trajectory with Falcon. Can they sustain the flight? 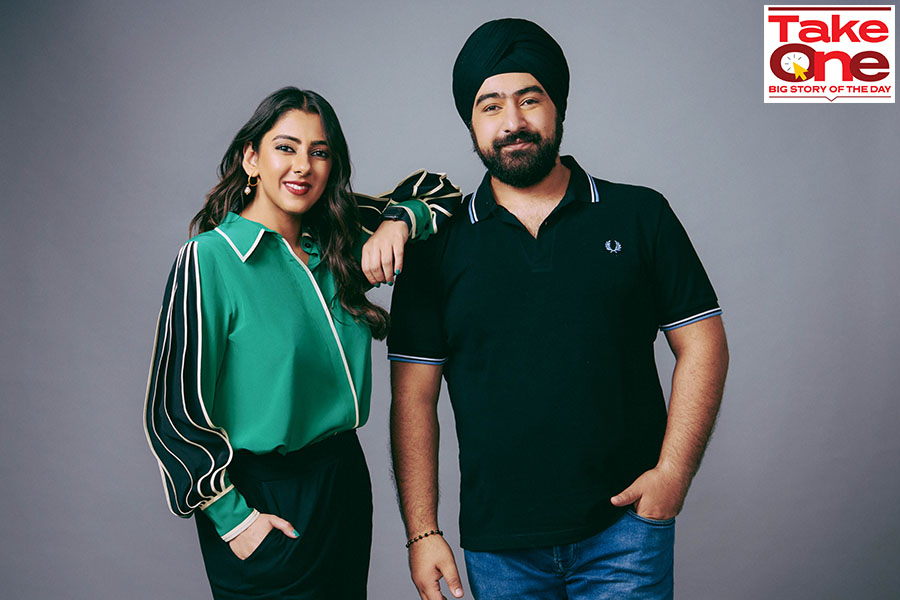 The ‘Kite’ was designed to soar from Day 1. An economics grad from Yale University, Priyanka Kanwar came back to India in 2015. The trigger was to make an impact in the fintech world. Apart from the entrepreneurial bug that she inherited—her family had been into the business of manufacturing and real estate for over five decades—Kanwar was inspired by the thesis that she worked on during the final year of her college. She studied impact of the direct benefits transfer (DBT) system, the service delivery and expansion of financial inclusion in rural India. “I wanted to create a mobile payments startup in India,” recalls Kanwar, who started Kite Cash along with her school friend Prabhtej Bhatia in 2016. “Kite Cash was like Venmo meets M-Pesa,” says the young entrepreneur who started her first venture when she was 22.

The rookie founder sharply identified the pain points. The first was clunky experience in peer-to-peer money transfer in the country. Like Venmo—an American mobile P2P payment app started in 2009, and bought by PayPal in 2013—Kite Cash was built for the easy transfer of money wherein the transacting parties were not required to know each other’s bank account details. The second problem was making the financial world more inclusive. Just like M-Pesa, a mobile banking service introduced in Kenya, Kite Cash enabled unbanked people to pay for and receive goods and services using a mobile phone. Kite Cash, Kanwar underlines, did two things. First, it let people easily exchange their cash for e-money. And second, it made them comfortable transacting on a mobile app without even owning a bank account. The proposition, she underlines, was crafted to work well for students, housewives, and anyone in Tier-II cities who didn't have bank accounts and wanted financial freedom.

The idea was great, but there was a small problem. For the kite to soar, the co-founders needed lift. “It took us 18 months to launch the product,” rues Kanwar, adding that Kite Cash became operational in 2017. The reason for an inordinate delay was simple. Banks were reluctant to back the rookie founders. “College ke bachche kya kar logey (what will college kids do)” was the dismissive reaction of most of the financial institutions. “Don’t waste our time. We just want to focus on our core business,” was how the young founders were snubbed by the bankers. Another problem was the lack of tech infrastructure. “Most of the banks didn’t have APIs. We had to build everything from scratch,” says Bhatia. Finally, RBL saw the promise and partnered with Kite Cash.

Well, the Kite did soar on its debut. Kanwar decided to test the waters from one of the colleges in Delhi University. The reception was overwhelming. In fact, Kite Cash team found itself swamped on Day 1. “We had over 10,000 sign-ups,” she recalls. The B2C payments product had turned out to be a blockbuster. Day 1 turned out to be just the teaser. Over the next eight months, the bootstrapped venture managed to get a staggering 1.5 lakh users from across 2,000 cities. “The uptick was swift. We never imagined such a kind of reaction,” she recounts.

There was something else also which Kanwar failed to imagine: High cash burn. In a short span, Kite Cash had processed over $100 million in transactions. What the business lacked, though, was strong unit economics. Back in the pre-UPI days, and due to the easy option of loading money into the card, Kite Cash had to act as the merchant for the payment gateway. “We had to fund the loading on the wallet,” says Kanwar. Though the startup had tonnes of transactions, and the app was getting popular, the venture was losing money every month. “It was very difficult to monetise it,” says Kanwar. Coming from a traditional business background and trained in the so-called ‘old school’ of doing business, a bleeding business was the last thing that the co-founders could have built. “Cash burn was not in our DNA. We wanted to build sustainable business,” says Bhatia.

The co-founders knew how to fly a kite, but didn’t know how to keep it up in the sky. To fly a kite, one needs a successful lift-to-drag ratio. The thing to remember is that the lift must exceed the drag. In the case of Kite Cash, the drag was pulling down the lift. “We decided to morph into a B2B business,” says Kanwar, adding that B2B payments was a less noisy space. Kite gave way to Falcon, which was rolled out in January this year. From B2C payments space, the co-founders tried their luck with BaaS (banking-as-a-service) model, which is an estimated $30-billion market opportunity.

The pivot seems to have worked. From an operating revenue of Rs 12 crore in FY22, Falcon is striking a run rate of Rs 80 crore for FY23, and claims to be profitable at a unit economics level.

The backers are excited with the growth prospects and the switch to BaaS. “The world is at the precipice of yet another technology shift, and BaaS would be a key enabler,” reckons  Krishnan of Five Star Finance. Most of the world’s financial systems, he maintains, are running on code written in the 80s, and the traditional players are moving towards modern financial stacks, which are cloud-native and API-ready. India, interestingly, is at a unique position. Not only is the country becoming a global leader in developing modern payment and lending protocols, it also has a cost advantage. “We truly believe the next set of leaders in this space will come from India,” says Krishnan.

Also read: Are buy now pay later offers worth it?

For American serial entrepreneur Ali Moiz, Falcon emerged as a compelling choice when it came to investing in the BaaS space. “Rather than competing with fintech players, they have the potential to become the foundation for them,” says the founder of Stonks, an online platform that lets founders pitch to investors and VC funds. Falcon’s proprietary financial stack, reckons Moiz, will enable some of this decade’s most defining banks, financial institutions, and tech companies. Even within their space, Falcon is building among the most complete product suites in BaaS across payments, accounts, lending, and cards, and they are investing in the technologies of the future, such as UPI and digital credit. “All this made Falcon an exciting proposition for us to bet on,” he adds.

In spite of a heady growth, challenges remain. Kanwar points out the biggest one. A lot of banks are still playing catch-up when it comes to cloud-native, API-ready infrastructure. So, it takes time to build a solid foundation for fintech and perfect user journeys. Another impediment is a constant regulatory flux. Regulations, says the 31-year-old entrepreneur, are ever changing and compliance costs have increased. But there is a silver lining. “Today, the need for BaaS is stronger than ever,” says Kanwar, adding that her entrepreneurial journey with Kite was about breaking free from what everybody else was doing in the college. “With Falcon, I have come of age as a fintech founder,” she says.

The only thing that Falcon, Kanwar and Bhatia must keep in mind is the basic principle of flying. Whether it’s a Kite or a Falcon, the rules remains the same: Lift-to-drag ratio. The lift must always exceed the drag.

Tweets by @forbesindia
Armageddon to wet lettuce: The phrases that defined 2022
How does future time reference impact the likelihood of individual engagement in social entrepreneurship?