The Pagglait actor is a diligent learner, according to filmmaker Umesh Bist, and has some memorable roles under her belt. She's now ready to scale new heights 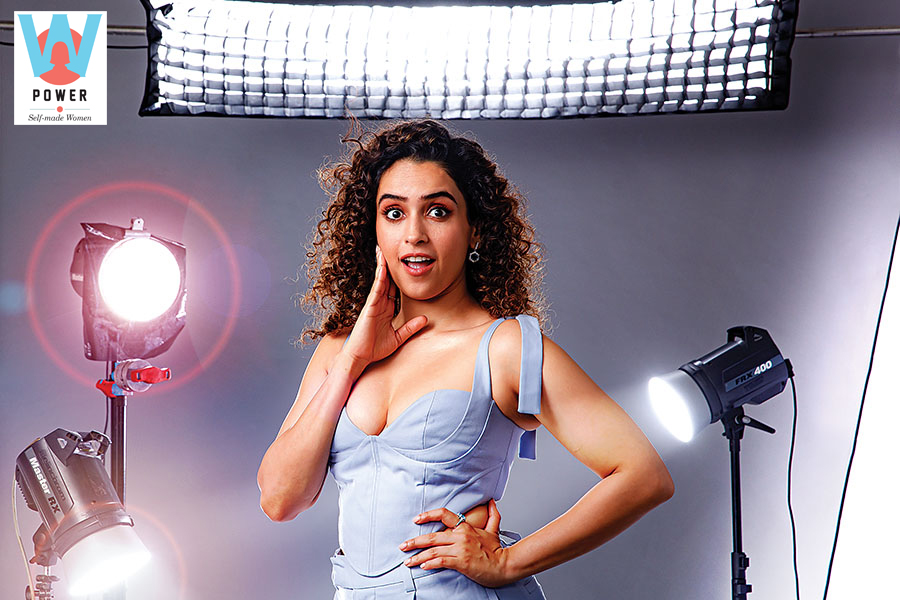 Filmmaker Umesh Bist recalls how actor Sanya Malhotra, on the sets of his film Pagglait, became so vulnerable that she gave herself over to the onscreen character of a young widow who is unable to grieve the death of her husband.

In the film, which was released on Netflix in March, the protagonist Sandhya Giri is shown to be all over the place. Bist recalls that Malhotra, while shooting in Lucknow, told him how she returned to her hotel room and realised that everything was scattered and in a disarray.

“She said she felt as if it was Sandhya living there and not Sanya,” he says, calling Malhotra an inquisitive actor and a diligent learner. And every time she forgets herself in a character, Bist continues, she shines in her performance, but gets affected as if all those things are happening to her in real life.

“It is difficult for me to get a character out of my system,” Malhotra tells Forbes India over a phone call from Mumbai. If there is one big lesson the actor is still learning in her five-year-old career in the Hindi film industry, it is how to disassociate with onscreen roles. “It is tough, because at times when you have to induce certain emotions for a role that you have never personally experienced in life, you make back-stories for your characters and imagine things about them. And then it becomes difficult to maintain boundaries.”

No wonder then that Malhotra describes her film career as a “roller-coaster ride”. Since her debut in 2016 with Nitesh Tiwari’s wrestling drama Dangal starring Aamir Khan, the 29-year-old has essayed a range of characters, like the spiteful and loud Chhutki in Vishal Bharadwaj’s Pataakha (2018), shy and reticent Miloni in Ritesh Batra’s Photograph (2019), and most recently a free-spirited and confident Tamil woman in Vivek Soni’s Netflix film Meenakshi Sundareshwar that released to mixed reviews on November 5. Critic Nandini Ramnath, reviewing Meenakshi Sundareshwar for Scroll, says that “in a movie that misses the big picture of whatever it is trying to say, Malhotra is among the few grace notes”. 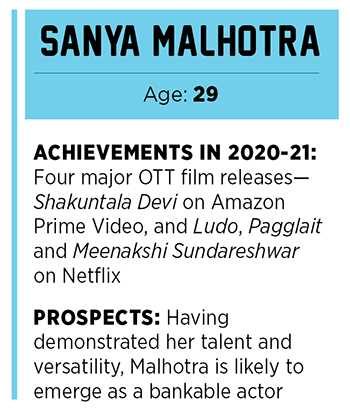 Bist calls Malhotra a “complete performer and an honest human being”, something he believes gets reflected in the characters she portrays on screen. The actor, on her part, is always keen to get feedback that will help her improve her craft. “I am a self-taught actor, and whatever I have learnt is on the job,” she says.

Malhotra grew up in Delhi harbouring a secret dream of becoming a dancer and an actor. Secret, because she felt no one would take her seriously. “I was a shy and introverted child, but when I was in my own world, which was after school, in my room in front of the mirror, I turned into a drama queen,” she says. After graduating in economics from Gargi College, she joined a ballet company and participated in a dance reality show that got her to Mumbai. “I did a couple of auditions and was in the Top 100 but could not get through. I was heartbroken for months,” she says.

What seemed like the end of the world resulted in her deciding to stay back in Mumbai to see if she can build an acting career. It was 2014 and she shared a flat in Yari Road, Andheri, with five other women. “We were broke all the time but still managed to have fun,” Malhotra recollects. She started giving auditions for advertisements, using those platforms as opportunities to build up her confidence and overcome her self-doubt.

There was, however, no steady flow of work. “There were times when I had no work for months together and I just sat at home doing nothing,” she says. “I had asked my parents for six months, but it had been over a year and I was yet to prove myself.” Her father’s confidence in her helped her navigate tough times, the actor says. “He used to tell me, ‘Rome was not built in a day, so take your time’. That kept me going.”

Finally, about a year-and-a-half after she came to Mumbai, Malhotra auditioned for Dangal and landed the role of wrestler Babita Kumari.

As the entertainment industry cautiously starts opening up again, Malhotra is back to working 12 hours a day. “It’s hectic now,” she says, but enjoys every minute of it.

The actor has Love Hostel coming up alongside Bobby Deol and Vikrant Massey, and is working on the Hindi remake of the Telugu thriller Hit with Rajkummar Rao.

Malhotra finds it gratifying that even as theatres shuttered due to the pandemic, she managed to entertain the audience with four OTT releases over the past two years. “I hope my films brought some happiness to people’s life in a tough year,” she says.