With the failure of its Blackberry deal and in-house brand Zen Mobiles, Optiemus has had a turbulent last few years, and is now rebooting with a sharp focus to emerge as one of the top homegrown electronics manufacturing companies 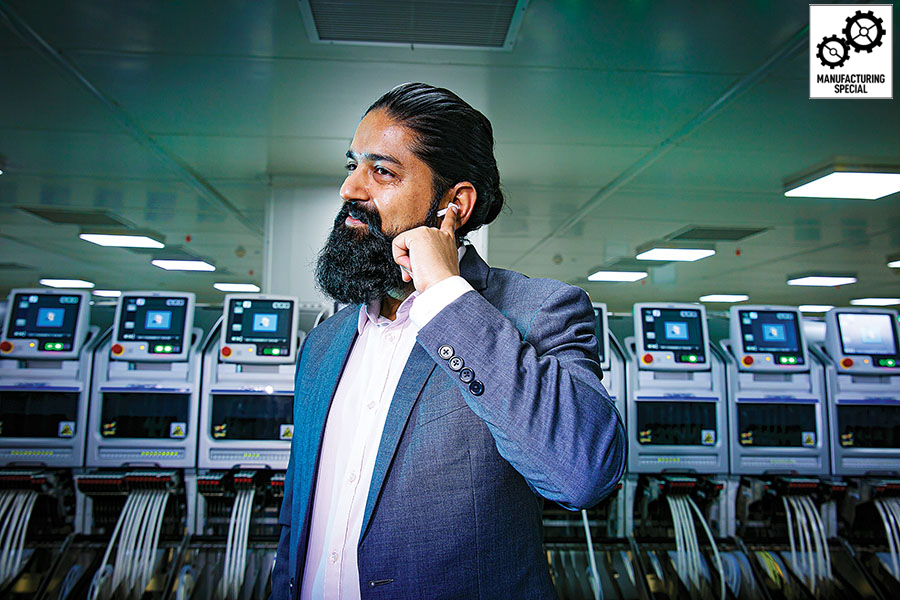 Nitesh Gupta, director, Optiemus Electronics. Optiemus has been manufacturing handsets for the likes of LG and HTC at its Noida facility. Image: Madhu Kapparath

It looked like a smart move. “It indeed was in early 2017,” recalls Nitesh Gupta, director at Optiemus Electronics, the wholly-owned arm of Optiemus Infracom, about the time he inked an exclusive and long-term licensing deal with Canadian smartphone maker BlackBerry to design, manufacture and distribute their handsets in India, Sri Lanka, Nepal and Bangladesh in February 2017.
Optiemus, which started its journey as a retailer and distributor of Nokia handsets in 1995, grew in stature and size over the next decade. The Delhi-based company went on to add more biggies to its retail kitty such as Samsung, Plantronics and HTC, launched its own handset brand Zen Mobile in 2009, and crossed the ₹1,000-crore revenue mark in FY17.

With BlackBerry, it was set to take a bold bet. “BlackBerry was a massive opportunity,” recalls Gupta, who joined his father’s business in 2011 after completing his master’s in entrepreneurship from Nottingham University Business School in the UK. Despite the fact that BlackBerry was fast slipping into its sunset years globally in 2017, the move made ample sense to the entrepreneur, who was 25 at the time. “The brand had massive equity and recall among Indians,” reckons Gupta, who was confident of making it big with BlackBerry.

The then-two-decade-old Indian company had a lot riding on BlackBerry for a couple of reasons. First, by 2017, Chinese smartphone makers had started hammering the homegrown players. From just four percent market share in the first quarter of 2016, Xiaomi had leapfrogged to 13 percent in the first quarter of 2017, according to Counterpoint Research. During the same period, the biggest Indian player, Micromax, had slumped from 17 percent to five percent. Another Chinese warrior, Vivo, had jumped from one percent to 10 percent during the same span. The room for Indian players such as Lava, Intex, Karbonn and Zen Mobile was getting constricted.Also read: Vivo's V-shaped comeback
Second, the Chinese onslaught had battered other global players in India as well. LG and HTC, for which Optiemus had been manufacturing handsets at its massive 75,000 square feet manufacturing plant in Noida, ran out of steam. There were other problems as well. The contract manufacturing business of mobiles was now on a shaky ground, and the company had spread itself thin by trying to do too many things. BlackBerry seemed like the silver bullet Gupta was looking for.

To be fair, the first year started with a bang. “The company derived revenue of ₹352 crore from BlackBerry sales during FY18,” according to a report by credit rating agency CARE. Though Optiemus’s revenue had dipped to ₹622.69 crore in FY18, more than half of it was coming from BlackBerry! Then started the problem. To ensure that the company met the foolproof security requirement of the handsets, which BlackBerry was famous for, Gupta was always late in rolling out products in the market. “By the time we launched a new version, the Chinese players already had a better tech version,” he says.
Playing a catch-up game didn’t make sense. And that reflected in the numbers. For the first nine months of FY19, the company could only clock ₹192 crore from sales of BlackBerry. Over the next few months, sales vanished, Optiemus exited from making its own brand as well as the BlackBerry business, and the contract manufacturing venture hit a new low. From a high of ₹1,010.61 crore in revenue in FY17, Optiemus slipped to ₹308.42 crore in FY20, and to ₹225.4 crore in FY21.
The BlackBerry failure was the lowest point in his life. “I saw back-to-back failures,” says Gupta, now 36. The folding up of the Zen Mobile business and the failed bet in BlackBerry was devastating for the second-generation entrepreneur, who had always erred on the side of caution while taking decisions to make products. Zen Mobile was a chance to give Optiemus a consumer face. It failed. BlackBerry was another attempt to have a play in B2C business. It bombed. To go for a third attempt could have been fatal, especially when they had everything to lose.Also read: Desi BlackBerry vs Chinese dominance
Gupta decided to dump all his B2C aspirations. He spotted a faint opportunity in the business of making hearables and wearables, and Optiemus geared up to become a back-end player. The move, though, didn’t appear to be smart. The reason was clear: A pony market size, which was projected to remain small. Look at the numbers for 2019. While the Indian market for smartwatches was at 1.1 million units, the earwear category was at 8.4 million units, according to market intelligence firm International Data Corporation (IDC). With Apple, Samsung, JBL, Harman Kardon and Infinity dominating the space, there was no Indian manufacturer in the hearable and wearable space. “I wanted to take the leap,” says Gupta. “To me, it was a smart move, but people perceived it to be stupid.” 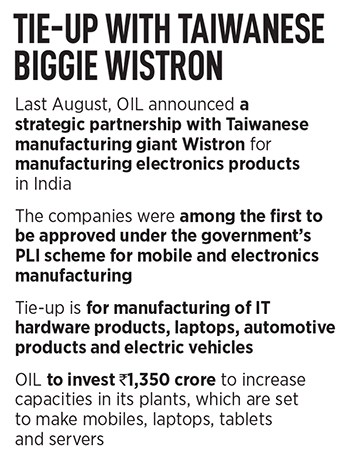 Cut to June 2022. Gupta’s bet is paying off handsomely. Thanks to the pandemic, the market for hearables and wearables has exploded, and Gupta is well placed to make most of the early-mover advantage. While smartwatches jumped from 2.63 million in 2020 to 12.23 million in 2021, truly wireless stereo (TWS) increased from 11.3 million units to 20.3 million during the same period. It meant a windfall for Optiemus, which tied up with Taiwanese manufacturing giant Wistron for manufacturing electronics products in India in 2015. With Indian players overwhelmingly dominating the space, Optiemus emerged as a reliable partner for many, including Noise.
There has been no looking back since. Optiemus almost doubled its revenue in FY22 to ₹429.73 crore, and posted profit of ₹18.53 crore, from a loss of ₹4.94 crore in FY21. Last August, it entered into another deal with Wistron for manufacturing electronics products in India. The companies were among the first to be approved under the government’s production-linked incentive (PLI) scheme for mobile and electronics manufacturing. The tie-up, says Gupta, is for manufacturing of IT hardware products, laptops, automotive products and electric vehicles. 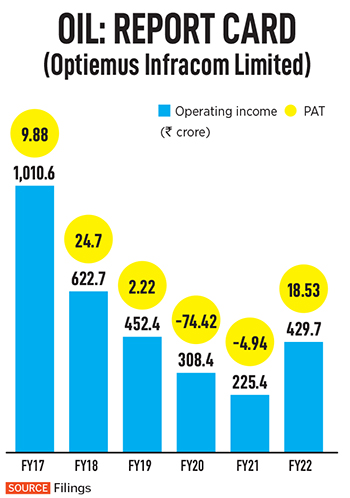 Industry observers reckon that Optiemus has pivoted its business model, which now has the potential to scale into something big. “They are at the right place at the right time and already have a momentum,” says Anshika Jain, senior analyst at Counterpoint Research. Qualifying for the PLI for mobile phones, IT hardware and telecom products makes it a right partner for brands who have multiple products and ambitions to scale and localise their operations in India. The partnership with Wistron, she adds, will give it access to not just know-how, but also expertise in future expansion as technology plays a key role in manufacturing.
Apart from the deal with Wistron, which has beefed up the tech muscle of the homegrown electronics equipment maker, Optiemus roped in the man responsible for kick-starting
Apple’s production in India. A Gururaj, former managing director at Wistron India from 2016 till 2019, joined as managing director last June. “I always wanted to work for an Indian entity,” says Gururaj, adding that the desire to play a role in creating world-class Indian entities was the trigger to join Optiemus. For sustainable supply chains across the world, he says, strong Indian entities have to be built.

Crediting Gupta for making the right call on starting manufacturing hearable and wearable devices, Gururaj reckons that the company has hit the right note. “There is no other Indian electronics manufacturer with a global partner,” he says, alluding to Optiemus’s partnership with Wistron.Also read: How China's growing supply chain constraints are giving Apple's India play a big boost
Gupta, for his part, is making sure that he makes a diversified bet this time. From mobiles to hearables, wearables and laptops, he is widening his net as much as possible. “A space that we see really growing fast is connected devices,” he says, adding that laptops and connected laptops would be a huge market for Optiemus. “We are running our trials and will start making laptops soon,” he says. Optiemus, he says, doesn’t want to be an electronics manufacturer. “We want to be an experiential manufacturer and make world-class products from India and for the world.”