There are a few options that Greece could choose from to handle its debt. But each has its own pitfalls 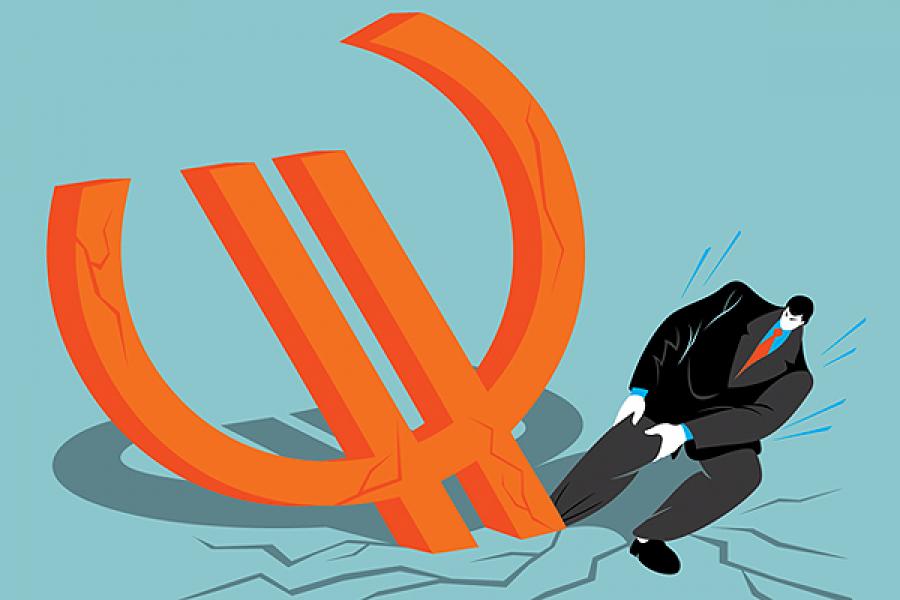 Greek problems have been resolved for somewhere between a few days and four months, with the agreement of a tentative four-month extension of Greece’s existing bailout programme, but only if certain conditions were met.

Morals
The Syriza-led government claims the moral high ground. While the human cost of Greek austerity is unarguable, it ignores earlier actions at the heart of current problems. Greece has been on a long borrowing binge that fuelled consumption and government spending.

The European Union (EU), led by the Germans, is also convinced of its moral position. Agreements must be honoured, particularly since two assistance packages have been provided. Germany refuses to acknowledge that its large savings and trade surpluses contributed to the excess borrowing and spending in Greece. Lenders were recklessly indifferent to risk in making loans. Bailouts benefited banks, particularly from Germany and France, with less than 10 percent of the €240 billion bailout going to Greece. Europe refuses to accept that it allowed Greece to fudge its way into the euro. It cannot countenance that a single currency without full political and financial integration was a bad idea.

In return for conditional funding from existing programmes, the Greek government, by agreeing to the extension, has been forced to do an embarrassing somersault to its earlier position. Greece’s finance minister sought to portray the deal as mutually beneficial and one allowing Greece greater freedom of action. The German finance minister was closer to the mark when he gloated that the Greeks would have a difficult time explaining the deal to their voters.

Facts
Greece’s debt is not the immediate issue. Interest expense excluding deferred interest is around 2.6 percent of gross domestic product. This compares to 5 percent for Italy and Portugal and 3.3 percent for Spain. The interest rate on loans from the European Financial Stability Fund which make up 45 percent of its debt is around 1.5 percent.

Greek debt is generally long term with an average maturity of more than 16 years; some bailout loans mature in 2053. Greece has around €22.5 billion of debt repayments this year.

However, Greece is unlikely to be ever able to pay back its current borrowings. No amount of semantics and pettifoggery can disguise that fact which has not changed since the start of the crisis. What cannot be paid back will not be paid back.

Total capital flight is estimated as more than €25 billion from December 2015 onwards (about 8 percent of GDP). Withdrawal of deposits from banks is running at around €2 billion a week, and accelerating. Greek banks are dependent on funding from the European Central Bank (ECB) to meet these outflows. The banks also rely on ECB funds to purchase Treasury Bills needed to finance day-to-day government operations. Withdrawal of around €70 billion in ECB assistance  being used like a choke collar to keep Greece compliant would precipitate a collapse of the banking system.

Greece also needs €30 billion to €50 billion this year for normal operations and to repay maturing debt.

This short-term cash requirement and the ECB’s tactical manoeuvring may explain the embarrassing and politically risky back down on the temporary extension.

Without Revenue
The effects of austerity and the shrinkage of the economy are one problem. Greece fundamentally suffers from lack of revenue.

Tax collection fell in anticipation of a Syriza victory in the election that was expected to reduce tax liabilities. The present government has resolved to tackle tax avoidance and improve revenue collection. While desirable, in a world of mobile capital, it is difficult to see this having any short-term impact. The Greek government expects to raise €5.5 billion from tax reforms and better enforcement. But it also plans to write off over €70 billion in unpaid penalties against taxpayers.

Greece is internationally uncompetitive. Even in tourism, in which it enjoys advantages, it struggles to compete with Turkey and other Mediterranean resort destinations. In part, this is the result of the euro cost base that compares unfavourably to the weak Turkish lira.

Since the commencement of the Greek crisis, internal devaluation, mainly through lower wages, has reduced costs by around 15 percent. But this has not resulted in a significant increase in exports. The correction of Greece’s current account deficit reflects the collapse of imports due to a shrinking domestic economy rather than higher exports.

Outside of tourism and some agricultural produce, Greece simply does not have much to export. Higher energy costs (driven by excise taxes and electricity rates) and (in recent times) lack of bank credit reduce competitiveness. Weak global demand is unhelpful to Greek export prospects. As a result, Greek goods exports are 17 percent of GDP, much lower than Germany (38 percent), Portugal (29 percent) and Malta (37 percent). Only Cyprus at 13 percent within the euro-zone is lower.

Extensions and debt negotiations cannot deal with the problem that Greece has insufficient revenue to meet its spending commitments. 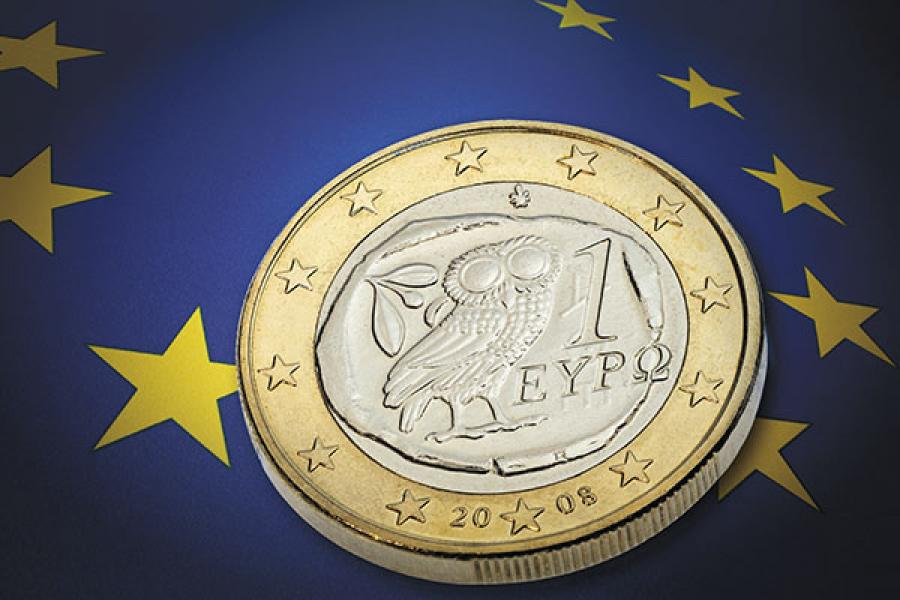 Choice Cuts
The choices now for Greece are clear.

In the first option, the EU makes allowances. Maturities of borrowings, especially near term commitments, are extended. There are concessions on interest rates. Existing debt may be replaced with securities without maturity and a coupon linked to growth, so-called Keynes-style Bisque bonds. The required primary budget surplus is reduced, perhaps with some new investments from the EU to boost activity. The ECB continues to support the liquidity needs of the Greek banks. The hated Troika is re-named, to remove the odious association with the past.

Despite the reduction in the economic value of the outstanding debt, the EU and lenders avoid a politically difficult explicit debt write down. Syriza claims to have fulfilled its mandate to stand up to the EU and Germany and reclaim Hellenic sovereignty and pride.

In reality, little changes. Under this scenario, Greece and the EU are back at the negotiating table, within six to 12 months, confronting the same issues.

In the second option, Greece defaults on its debt but stays in the euro. It is not clear how a defaulted nation can remain within the euro other than the fortuitous absence of an ejection mechanism.

Greek banks collapse if the ECB decides to withdraw funding. Capital flight accelerates, forcing implementation of capital controls. The Greek government is left with no obvious source of funding for its operations, other than a parallel currency or IOUs used during some government shutdowns in the US. Greece’s competitive position is unchanged as it purports to use the euro. The EU and lenders incur immediate substantial losses on their loans.

In the third option, Greece defaults and leaves the euro, replacing the common currency with new drachmas. There is short-term chaos. Activity in Greece collapses. The EU and lenders face the same problem as in the second option. In addition, the euro is destabilised.

The third option allows Greece to regain control of its currency, money supply and interest rates. Sharp devaluation of the new drachma improves competitiveness, for example in tourism. The ability of the central bank to create and control money supply helps restore liquidity to the banking system and provides a mechanism for financing the government.

A cheap new drachma, if appropriately managed, may reverse capital flight, as the threat of a loss of purchasing power is reduced. A devalued currency may help attract inflows of funds looking for bargains. In time, Greece regains access to capital markets as Russia did after its 1998 default.

Greece regains economic sovereignty, but at the cost of reduced living standards as import prices skyrocket and international purchasing power is diminished. But after the initial dislocation, and with the implementation of correct policies, a strong recovery may ensue.

The fourth option entails Greece caving in to EU demands, continuing with the mandated bailout terms and adjustment programme, that is austerity. Syriza may be able to manage the backlash against its concession on the short term extension. But continuing failure may result in electoral problems, triggering a collapse of the governing coalition. In turn, new elections take place.

Syriza may return with a specific mandate to default and leave the euro. Alternatively, disillusioned with the main parties and now Syriza, Greeks may turn to the fascist, rabidly anti-Europe and anti-euro Golden Dawn party. Civil disorder and societal breakdown may occur. A reversion to military rule which existed and only ceased in 1974 cannot be ruled out. The underlying economic problems remain.

Nuclear Exchanges
Given the effects of existing policies on the Greek people, continued or further hardship is not a major threat. EU and German assertions that a Greek default and exit from the euro (‘Grexit’) is manageable with little risk of contagion is hopefully only a negotiating stance. It is akin to Dr Strangelove’s belief in survivable thermo nuclear war.

With around 85 percent of Greek debt owed to official lenders, Grexit would immediately trigger significant losses on bilateral government loans, ECB holding of bonds, the loans made by bailout funds and under the TARGET settlement system. The total amount at risk is around €256 billion. The exposure of Germany, France, Italy, Spain, The Netherlands and Finland is €73, €55, €48, €33, €15 and €5 billion respectively. The political cost would be greater as voters realise that the true implications of the bailouts and their exposure to losses were not fully disclosed by their politicians and technocratic elite.

Grexit would trigger capital flight from other vulnerable nations. Access to money markets for nations suspected of being exposed would fall. Borrowing costs for these countries would increase.

The euro would become volatile, driven by speculation of its future composition and value dynamics. If the assumption is that the euro becomes the new deutschemark for a smaller euro-zone group, then it might appreciate sharply, reducing German export competitiveness. Volatility and uncertainty would be bad for investment and consumption.

The effect on European domestic politics may be significant, providing impetus to nationalist euro-sceptic parties such as the UK’s Ukip, Spain’s Podemos, France’s Front National, Germany’s AFD and the True Finns.

Once Greece defaults and/or leaves the euro, it would be difficult to stop speculation about other peripheral nations, undermining the entire basis for the common currency. Even without a full Grexit, any concessions to Greece would result in other countries such as Ireland, Portugal, Spain, Italy and France seeking relaxation on budgets and reform. Debt and fiscal sustainability within the euro-zone would become unachievable.