The contract manufacturing marketplace startup has galloped toward a Rs5,000-crore revenue in one fiscal 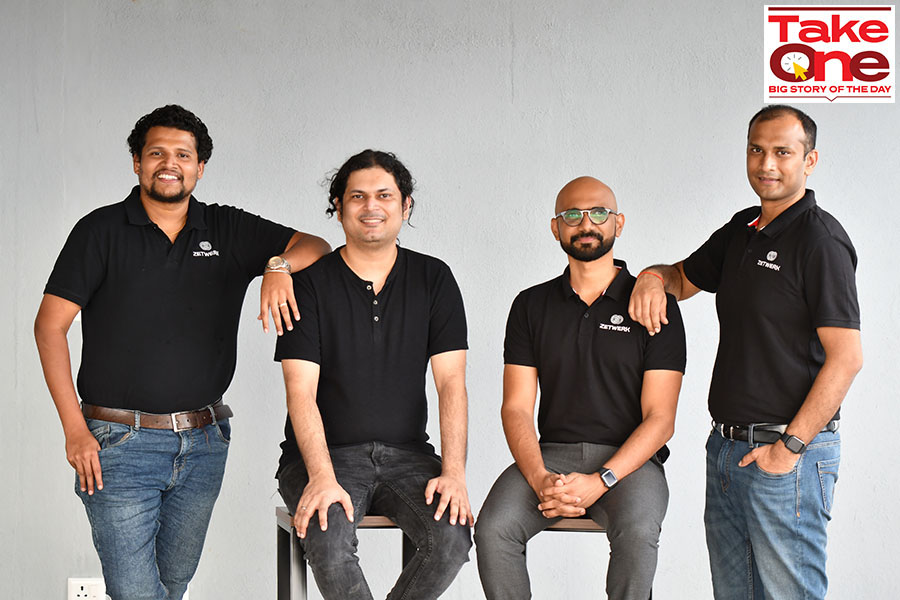 In August 2020, the ‘elephant’ first came into the picture. India clamped down on import of colour televisions on July 31. For a country, which imported colour TVs worth over $781 million in FY20, the move made ample sense as it was yet another big push towards local manufacturing. For the TV industry, though—which was then estimated to be around Rs15,000 crore—a sudden curb spelled doom. In FY20, players reportedly shipped TVs worth $428 million from Taiwan and $293 million from China. Now, the future suddenly looked uncertain. “Overnight, this (TV) emerged [as] a category for us,” recounts Amrit Acharya, co-founder and chief executive officer of Zetwerk. “Most of the players reached out to us frantically looking for solutions.”
Founded in May 2018 by four IITians—Amrit Acharya, Srinath Ramakkrushnan, Vishal Chaudhary and Rahul Sharma— Zetwerk started as a contract manufacturing marketplace for industrial goods. Till FY20, the startup solely focused on a bouquet of manufacturing solutions ranging from steel pipes to aircraft engine components. Then suddenly, the business plunged into uncertainty as India announced a lockdown to deal with the Covid-19 pandemic in March. Businesses got shut, production halted, and life became unpredictable.

While for most ventures, the pandemic precipitated trouble, for Zetwerk, the headwinds morphed into tailwinds. “Uncertainty,” says Acharya, an electrical engineer from IIT Madras, “is not necessarily a bad thing.” Leaving a cushy job with McKinsey in San Francisco and coming back to India to make a fresh start was as uncertain as it could get. “We took an overnight decision, packed two suitcases, and booked a flight back to India,” he recalls. “All we had was uncertainty,” he says, taking us back to the formative months of Zetwerk.
The investors were uncertain about the longevity of the business. The absence of an equivalent copycat business model in the US, the complex nature of the manufacturing marketplace, and an operationally-heavy requirement to scale the venture made Zetwerk unpalatable to most funders. Over three dozen rejections by VCs almost shattered the confidence of the co-founders. Acharya’s wife, who back in early 2018 was his fiancée, came up with a comforting assurance. “You don't have to necessarily have all the answers on day one,” she had said. “Trust the process. It’s okay to live with ambiguity.”
Back in 2020, the manufacturing players globally were indeed grappling with loads of ambiguity. And all of it stemmed from the Dragon Land—China—which is the manufacturing powerhouse of the world. The pandemic-induced draconian lockdowns, excessive restrictions and recurrent curbs almost choked the supply pipeline across the world. The fledgling China-Plus-One strategy—wherein companies avoid investing only in China and diversify their businesses to alternative destinations—gathered steam. A dominant chunk of the American and European buyers started aggressively scouting for a new partner to jive. Zetwerk, the Indian ‘elephant’ emerged as the favoured dancing partner. “We happened to be at the right place and at the right time,” reckons Acharya.
The co-founder, incidentally, also happened to be the ‘right man’ at the right place and the right time. By March 2020, his global managed marketplace for contract manufacturing had achieved a sizeable scale: Operating revenue jumped from Rs16 crore in FY19 to Rs321.93 crore in FY20. All revenue came from just one segment: Industrial manufacturing.
The losses, during the same period, looked pony in the context of ballooning revenue: Rs4.5 crore to Rs29.05 crore. With the onset of the pandemic in March 2020, Zetwerk was forced to diversify into other categories like apparel, consumer electronics, kitchen products, TVs, hearable and wearables, headphones and smartwatches. 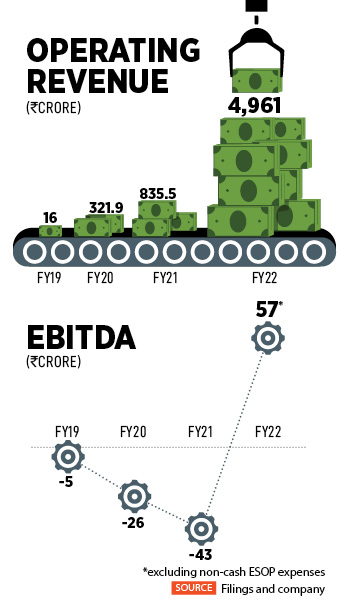 A cocktail of two drugs—China-Plus-One strategy globally, and an import substitution by Indian players domestically—turned out to steroid-induced growth for Zetwerk. Look at the numbers. From Rs 321.93 crore in FY20, operating revenue jumped to Rs 835.5 crore the next fiscal, and then pole-vaulted to Rs 4,961 crore in FY22. While overall losses remained, the startup posted operational profit for the first full year.
International orders, a dominant 70 percent coming from the land of the bald eagle—the US—also pushed the contribution of global revenue from five percent in FY21 to 16 percent in FY22. Back home, the gambit to diversify into multiple categories also seems to be paying off. Revenue from industrial segment is down to 70 percent, and the rest comes from consumer categories. “It has indeed been a dream run,” reckons Acharya. “Our ambition has grown with the size of the business, which has exceeded our imagination,” he adds. Entering into the US market, he underlines, and cracking it was not easy. Had it not been for conducive macro tailwinds, it would have taken longer, he says.
Also read: 3 Ps of profitability: How to bring Indian startup unicorns into the black
Backers of the company contend that the impressive growth has come on the back of diligent preparation and a tough grind. Zetwerk’s recent success, says Neil Shah, partner at Greenoaks Capital Partners, has been especially impressive given a very difficult operating environment, with several devastating waves of Covid in India, and unprecedented stress on global supply chains.
Amid these challenges, the company has achieved extraordinary progress, rapidly growing its international business and diversifying its order book, all while achieving sustainable profitability. “The achievement in the face of adversity are testament to the unmatched depth of the platform, Zetwerk’s powerful product-market fit, and the resilience of the entire team,” Shah says.
What investors find most impressive is the brisk pace of international growth. At the time of Greenoaks Capital’s first investment, Shah recalls, Zetwerk had not yet proven its ability to serve customers outside India or to manufacture products outside of industrial steel components. 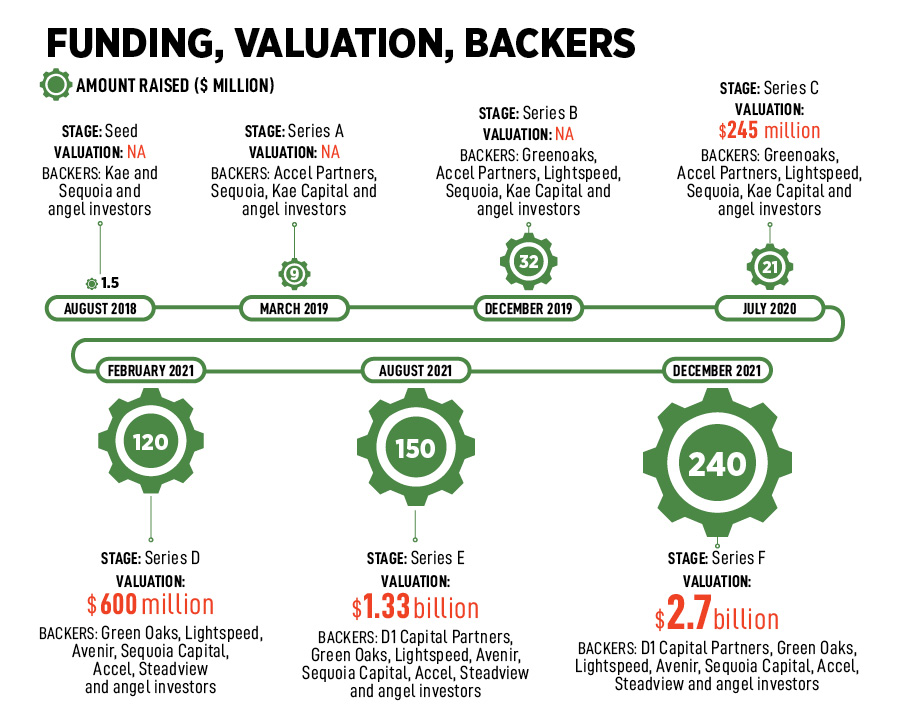 Geographic and category expansion are daunting challenges for any business, especially in manufacturing, where accuracy and speed are of primary importance and supply chains differ radically depending on the product. “However, over the last year Zetwerk navigated new challenges with confidence,” Shah says. The company expanded within the region, scaled across continents, found product-market fit in every new geography, and simultaneously built robust businesses in new markets like apparel, electronics and defence. “As Zetwerk’s network of manufacturing partners expands, we expect the company’s value proposition to grow manifold,” he adds.

Acharya reckons that the startup has its task cut out. “We want to be like Intel Inside,” he says. Delivering consistency, high quality and smooth experience for the businesses are three factors that the startup is working on. But what about profits? “We have been making money on every order since the beginning,” he claims, adding that the next step after operational profitability is overall profitability. Turning profitable, Acharya stresses, is something that the firm has been working on since the first year. “You can't suddenly decide that you want to be profitable,” he says. “It’s a mindset that you need to cultivate.”
While conceding that posting bumper growth every year won’t be realistic as pandemic tailwinds start to peter out, Acharya is confident about the strong interplay of domestic and international trends to keep the juggernaut rolling. He points out three strong trends that would likely play out in the future. First is high domestic demand driven by a revival in private capital into factories, infrastructure and long-term assets, especially in sectors such as metals, cement and pharmaceuticals.
The second theme is an increase in exports. While countries are increasingly opting for China+1 strategy for sourcing, the US is diversifying into India and other Asian manufacturing destinations, especially in precision components, electric vehicles, medical devices and renewables. “We also foresee Indian companies looking to localise manufacturing and reduce dependence on imports,” he says, pointing out the last theme. 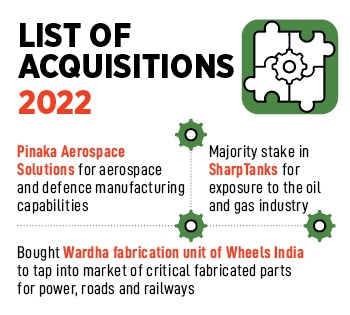 Acknowledging that the startup is well capitalised—Zetwerk raised $240 million in its Series-F round of funding at a valuation of $2.7 billion last December—Acharya maintains that most of the capital raised is still unspent. “It’s still lying in the bank. We have a very strong balance sheet,” he claims. The startup has been focusing on inorganic growth this year, and it will continue to do so, he informs. “We have enough capital to do all of those things.”
So what does Acharya value more? Capital in the bank or a unicorn that has been galloping at a heady pace? “For us, being profitable is more valuable than anything,” he signs off.