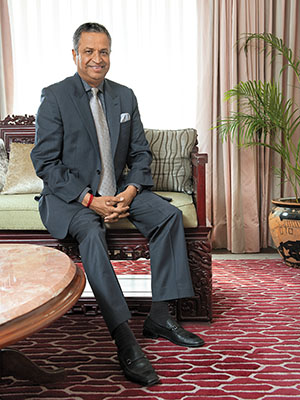 An earthquake on February 27, 2010, struck the Chilean coast, triggering a tsunami that caused widespread destruction. In the capital Santiago, Nepalese businessman Binod Chaudhary and his wife Sarika found themselves trapped in their hotel. “I didn’t even think of getting up and running,” he recalls. “When things returned to normal, I realised that life could end any moment and I should share my story.”

Born on April 14, 1955, to a wealthy businessman in Kathmandu, Chaudhary has built a billion-dollar empire under the Chaudhary Group and Cinnovation banners. He is also the only Forbes billionaire from the Himalayan nation, with a net worth of $1.16 billion (as of April 20, 2016). Chaudhary’s autobiography, Making it Big, published by Penguin Books India, takes a look back at his tumultuous journey.

“When I made up my mind to write this book, I also decided that I would not manipulate it,” he says. The result then is a candid portrait of a businessman not willing to take no for an answer.

Nothing perhaps typifies this as well as the story of Chaudhary’s partnership with Prince Dhirendra, brother to the former King of Nepal, Birendra Bir Bikram Shah.

In the early 1980s, to counter setbacks caused by political animosity from certain sections of the royal palace, Chaudhary struck a deal with Prince Dhirendra. “In order to protect me, he offered that I take a majority stake in a new company and signed a paper that confirmed that the money I was investing for his share was a loan,” says Chaudhary. The result was the creation of a company called Apollo Steel Industries. It gave him significant influence, thanks to the governance structure that he describes in the book: “In those days, all government ministries were divided among, and controlled by, the secretaries at the royal palace. However, these secretaries were subordinate to the King’s brothers, who had divided the ministries among themselves.” The details of the partnership and a subsequent standoff with the Prince’s wife make for a surreal display of power and corruption in the former kingdom. 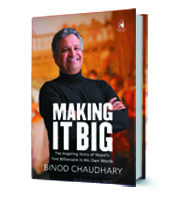 Seated in a suite at the Taj Lands End hotel in Mumbai, Chaudhary recounts this episode with a wry smile. “There were also good souls in the royal family,” he says of Prince Dhirendra, who was killed in a massacre in Kathmandu in 2001.

Chaudhary, the consummate salesman, often likes to tell the story of how, as a 16 year old, he stood outside The Taj Mahal Palace hotel in Mumbai and marvelled at it, too afraid to walk in. It also finds mention in the book. So does the fact that his group has since gone on to partner with Taj Hotels Resorts and Palaces in a number of countries.

While Wai Wai, the popular brand of instant noodles is perhaps his best known asset, a significant share of Chaudhary’s estate comes from the group’s stake in Nepal’s Nabil Bank. The candour that Chaudhary promises in the book is also evidenced in his personality. “That’s one of the things about people like me,” he says. “I persevered and I wouldn’t give up.” For now, with his group’s expansion into Southeast Asia and the Middle East, he is doing just that.