The government's recent economic relief measures will not restore real GDP to peak levels, it warns 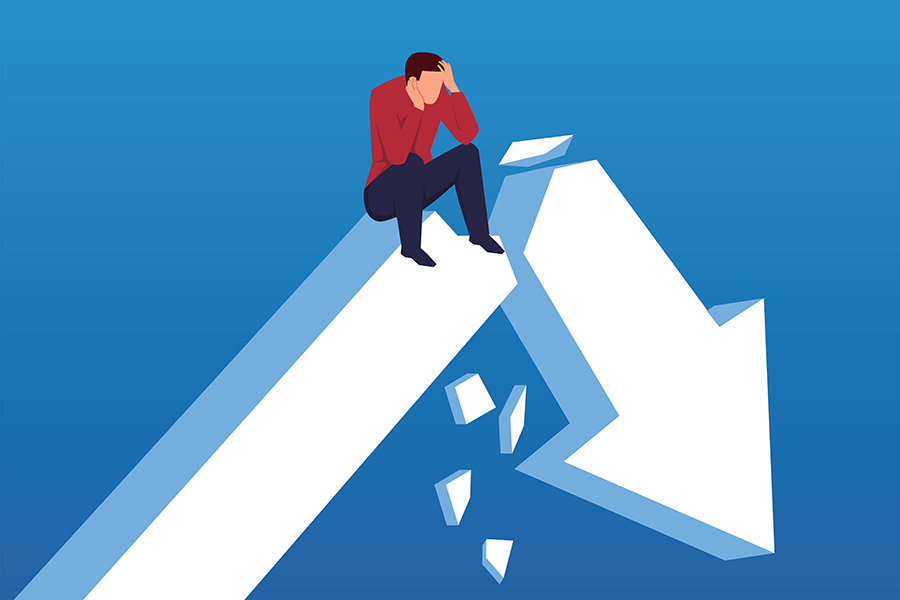 Moody's Investors Service on Monday downgraded India’s foreign-currency and local-currency long-term issuer ratings to Baa3 from Baa2. The main rationale is that “India’s policy making institutions will be challenged in enacting and implementing policies which effectively mitigate the risks of a sustained period of relatively low growth, significant further deterioration in the general government fiscal position and stress in the financial sector,” it said in a media statement. This comes just two days after the country reported its lowest pace of growth in 11 years—at 3.1 percent for the March-ended and 4.2 percent FY20 period. Construction, real estate and manufacturing growth all decelerated, dragging the figure well below the Q4FY19 figure of 5.8 percent. Moody's has also downgraded India's local-currency senior unsecured rating to Baa3 from Baa2, and its short-term local currency rating to P-3 from P-2. “The outlook remains negative,” it added. “India faces a prolonged period of slower growth relative to the country's potential, rising debt, further weakening of debt affordability and persistent stress in parts of the financial system, all of which the country's policymaking institutions will be challenged to mitigate and contain,” the ratings agency said. Moody's expects India's real GDP to contract by 4.0% in fiscal 2020. “Thereafter and over the longer term, growth rates are likely to be materially lower than in the past, due to persistent weak private sector investment, tepid job creation and an impaired financial system. In turn, a prolonged period of slower growth may dampen the pace of improvements in living standards that would help support sustained higher investment growth and consumption,” the ratings agency added. Ajay Bodke, chief executive for portfolio management services at brokerage Prabhudas Lilladher says, "Rigid, inelastic and ever-rising pressure on government finances from salaries and interest payments juxtaposed against sharply dwindling taxation revenues leading to persistent missing of medium-term fiscal consolidation targets have proved to be the Achilles heel for India's economic downgrade by Moody’s.” “Significantly higher debt burden as compared to peers in the same ratings category and escalating vulnerabilities for the extremely fragile, grossly undercapitalised banking and finance sector due to an expected spike in bad loans will continue to weigh heavily on any prospect of rapid economic recovery. Coming as it does in the midst of a frightening Covid-19 pandemic, the road ahead does look daunting,” Bodke told Forbes India. Unlocking as Covid-19 cases rise
India, like several European and Asian economies, is walking the tightrope between ensuring health and safety of its vast population by extending the lockdown and trying to get the economy and jobs back on track in zones where Covid-19 cases are few. Financial centre Mumbai, which contributes about a fifth of India’s total Covid-19 cases has seen 69 days of lockdown so far. The government has now released rules on easing of the lockdown measures in June even as it is now the seventh worst-hit nation in terms of coronavirus cases. On June 1, it reported its highest ever single-day rise, of 8,392 Covid-19 cases, taking the total number of cases to 190,535. With 38,37,207 people tested, India testing rate stands at 2,780 per million. The government plans to allow malls, restaurants and religious places to reopen in all areas except containment zones from June 8. But political, sports, entertainment, academic and cultural congregations will remain suspended. But with manufacturing and services at a standstill for nearly three months, the government had little option but to start opening up the economy. Independent economists forecast growth for the current April to June quarter is likely to be sharply lower than the March quarter. Most economists have pegged degrowth in the June-ending quarter by anywhere between 20 to 45 percent lower compared to the March-ended quarter. The RBI governor Shaktikanta Das has said that GDP growth in FY21 will be in “negative territory” but has declined to give an exact number. Support measures but no stimulus
In May, Finance Minister Nirmala Sitharaman announced, in five parts, a series of measures to heal the economy. Steps were aimed at providing credit lines through banks towards micro, small and medium enterprises (MSMEs) and relief for migrant labourers and the low-income, besides support measures for health care and wellness labs, agriculture, food processing, animal husbandry, defence, mining, power distribution companies and atomic energy sectors. But while she addressed supply side issues with Rs20 lakh crore package, there was no stimulus offered which will boost demand. In the absence of direct cash infusions, the fresh fiscal measures via banks totals just Rs 1.5 lakh crore, economists said. Moody's does not expect these measures to durably restore real GDP growth to rates around 8 percent, which had seemed within reach just a few years ago, it said in the statement.

Tweets by @forbesindia
IN PHOTOS: When fury erupts across America
Going back to the roots