The Lexus NX is back. Here's what that means for you

The NX 350h is a well thought-out product with lots of features like a competent engine and gearbox combination, a contemporary cabin design, and the right mix of style and substance 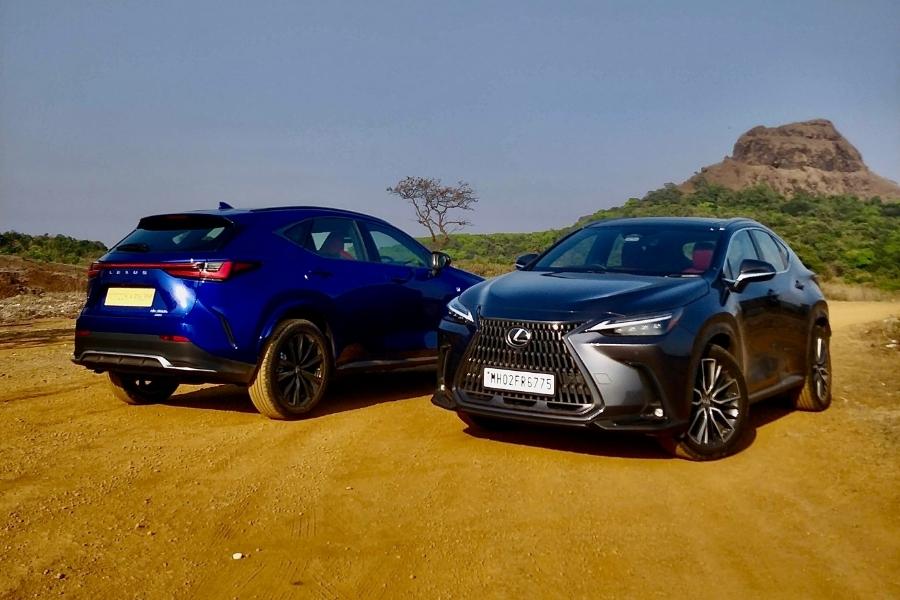 Lexus NX 350h got a lot of features, a competent engine and gearbox combination, a contemporary cabin design, and the right mix of style and substance.

Lexus in India has done a sterling job of marking itself out as the perennial dark horse among premium manufacturers. That it takes our market seriously is evident in the fact that India is one of only a handful of plants that make Lexus’ cars worldwide. If you would assume that this means a rapid increase in presence across the country via dealers and generally a stronger network than some of its rivals, you would be mistaken. What you can’t take away from Lexus, though, is the fact that its cars have the ability to stand out, and that’s exactly the case for the new NX 350h.
So what is the NX all about, then? Well, for a start, this isn’t the first time we’ve had the NX in India. It’s been here for a while now under the NX 300h guise (there’s even a video review you can check out on the Forbes India Momentum channel!), and the NX 350h simply takes the game a step further with a slew of much-needed updates.

In case you were wondering, the NX 350h goes straight up against cars like the BMW X3, the Mercedes-Benz GLC, the Audi Q5, the Volvo XC60 and the Land Rover Discovery Sport. Now that you have a reference marker, forget about it, because the NX 350h likes to go along a very different path compared to its rivals.
Among the lot, the NX is the only full hybrid vehicle. Lexus likes to call it the self-charging hybrid, and there is truth to it. Unlike a regular plug-in hybrid, the NX charges the battery on-board while the car is in motion, and can power the car solely on electric power. 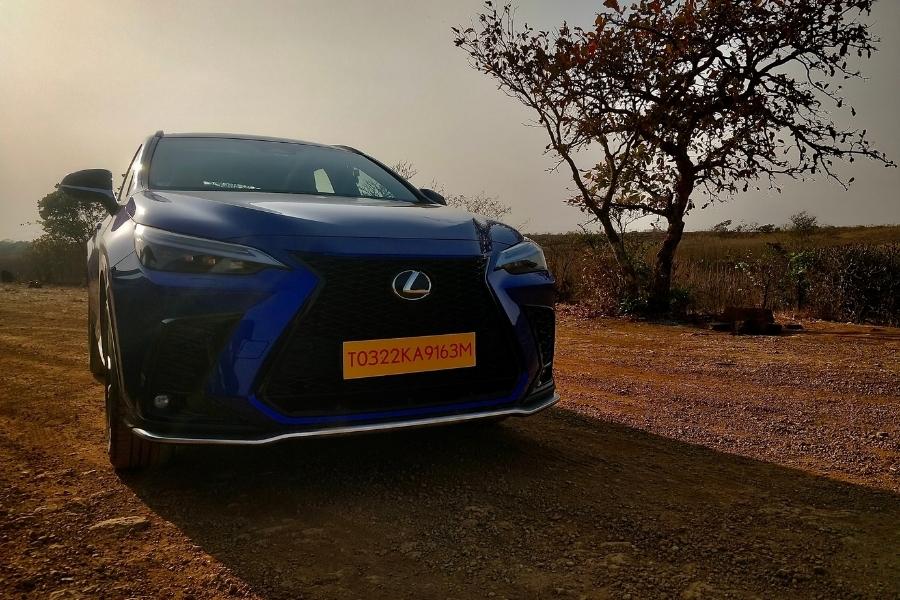 What’s also crucial is that it shouldn’t be mistaken for a mild hybrid, which only assists the engine. The downside, however, if you could call it that, for a full hybrid vehicle like the NX is that it can only go a maximum of four-five kilometres on pure electric power before the internal combustion engine kicks in and takes over. Keeping that in mind, the NX does quite well for itself in terms of fuel efficiency. You can expect figures north of 15kpl on average, which is none too shabby for a car of this weight and size.
The NX’s powertrain consists of the battery that powers two motors, one on the front and the other on the rear axle, and the engine that powers only the front wheels, which means the rear is a pure-electric axle only. The system works seamlessly, and you can’t really tell when the engine and motor/s switch over. And as for the engine itself, it’s a 2.5-litre petrol motor that makes 190hp, while the front motor makes 182hp and the rear motor 54hp. All of this combines to give the NX a very healthy total system output of 243hp. Of course, going quick isn’t on the NX’s agenda, but if you were to hit the right pedal hard, you’d see 100kmph come up in well under eight seconds. 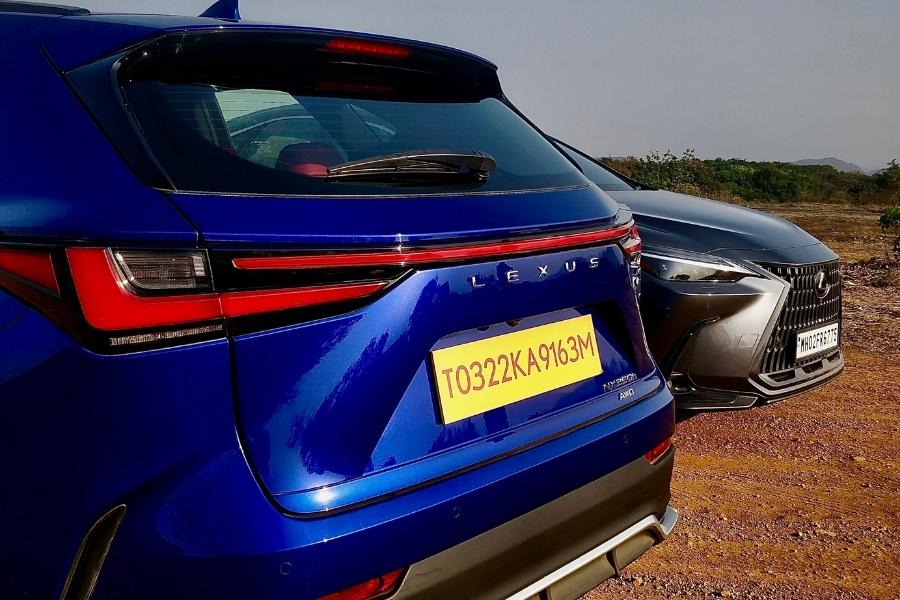 And if you kept going, you’d notice that the relatively calm and soothing cabin, devoid of noise so far, quickly transforms into one that’s really quite loud. It’s almost as if it’s done purposely by Lexus to remind you that the car is meant to be driven sedately.
Helping things along, though, is a CVT gearbox that’s built around the same ethos. Keep speeds civil and the gearbox performs admirably, going through its steps seamlessly and ensuring you notice very little of the rubber-band effect for which it is famed. 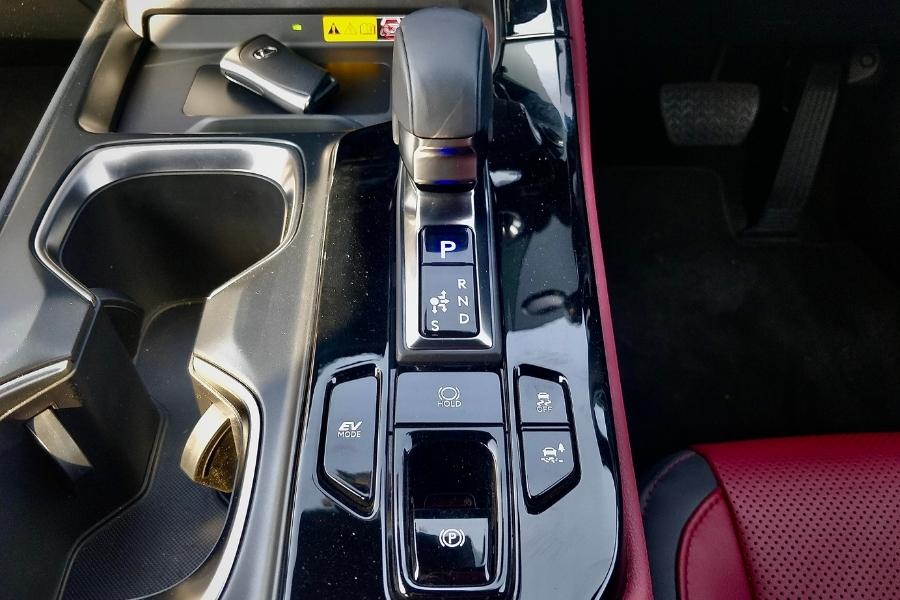 Oddly, though, the NX seems set up to tackle corners and spirited driving rather well. The chassis comes across as one cohesive unit, which goes a long way in minimising body roll while taking corners a touch fast. The steering and the massive 20-inch wheels also put up a good show, which constantly makes you second guess how you’re actually supposed to drive this car, given the obvious difference in personalities between the engine and gearbox, and the chassis, steering and grip levels. The top-of-the-line F-Sport spec even comes with variable dampers that kick in when you engage Sport mode, which no doubt improves the handling, but to what end?
What’s never in doubt is just how packed the NX is with convenience and safety features. There’s lane-keep assist, lane-departure warning, rear cross traffic alert, adaptive high beam and even a pre-collision warning system. As for creature comforts, there’s a massive 14-inch (!) touchscreen that’s as brilliant as it is comical to see. It houses all of the car’s multimedia controls, including wireless Android Auto and Apple CarPlay, and a bit of the car’s functions, too, but what felt distinctive was that Lexus, once again, has taken a slightly different route and not tried to make every control operated via the touchscreen. There are physical buttons for the audio system and the temperature controls, which is a personal highlight. 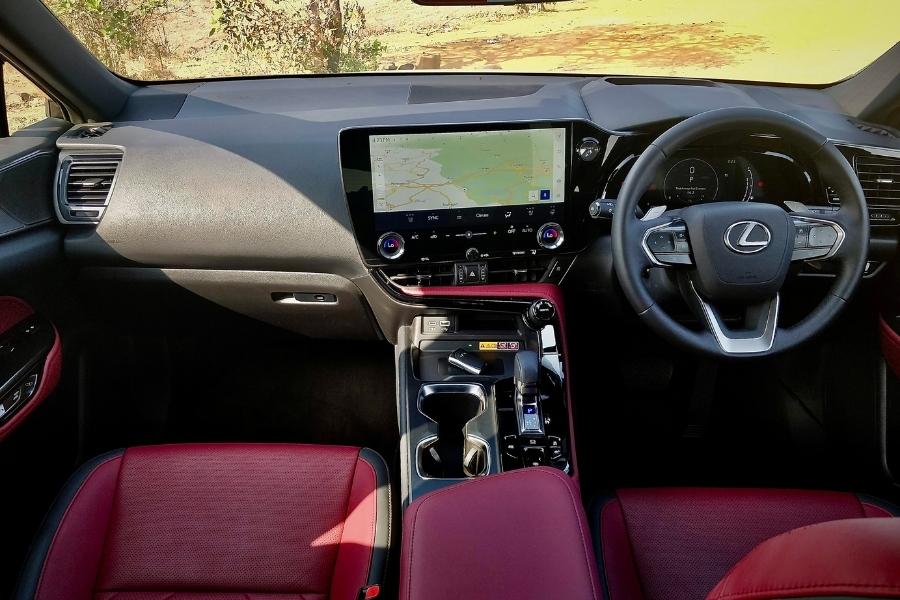 There’s also plenty of nice little touches like the fact that the door handles don’t physically move when you grab and pull at them. Lexus calls it the e-latch system, wherein a button gets pressed when you attempt to pull the door handles toward you, which then opens the door. Even on the inside, all you need to do is push a handle, which then presses a button and then opens the door. Clever stuff. Add to this, plenty of kit like a digital instrument cluster, a 3D surround camera, dual-zone climate control, ambient lighting, powered front seats with a memory function for the driver’s seat, and a beautifully detailed head-up display, and you have a car that’s well and truly brimmed with features.
Even though it’s highly subjective, the NX 350h, in my eyes, comes across as very good looking. This is no small car, mind, but the way it’s been styled gives it a very compact stance, and it’s littered with striking design elements all around. A particular highlight for me is the way the tail-lamps look in the night. Hard to find a rump that good looking nowadays.
Overall, the NX 350h comes through as a well thought-out product. One that’s got a lot of features, a competent engine and gearbox combination, a contemporary cabin design, and the right mix of style and substance. It may come with a price tag that’s a slight premium over its rivals, but Lexus has ensured that there’ll be plenty in the way of making you feel like you’ve got your money’s worth.