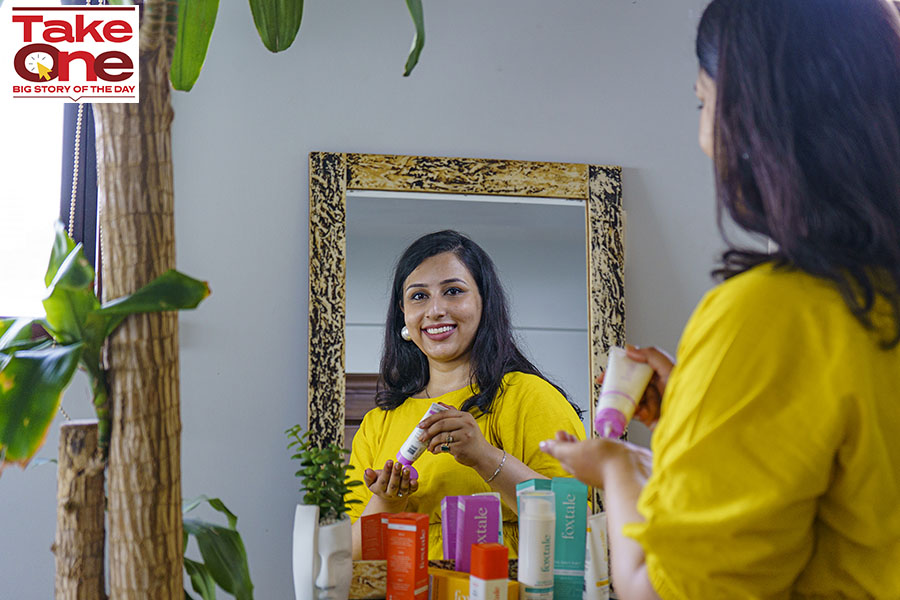 Romita Mazumdar, founder and CEO of Foxtale, believes that when you are a founder, people rally around you for the vision you have. Image: Neha Mithbawkar

It was an uncomfortable question. “It bothered me a lot,” recalls Romita Mazumdar, alluding to her maiden conversation with an angel investor around raising money for her fledgling direct-to-consumer skincare brand Foxtale, which was started in February 2021. “Are you married?” was the first question. “What happens whenever you have kids?” was the follow-up query. Mazumdar, who had stints with Harbor Ridge Capital, Provident Healthcare Partners and Bank of America Merrill Lynch as an investment banker for three years and then joined A91 Partners as a venture capitalist (VC) in May 2019, was feeling suffocated.

The supplementary question, however, exhausted her patience. “Why didn’t you opt for a male co-founder?” the angel continued with his outrageous quizzing. “Maaf karo. Mujhe aapke paise nahin chaahiye (Please excuse me. I don’t need your money),” replied the exasperated first-time founder. There was a reason to feel outraged. “I was never identified by my gender,” says Mazumdar. “I never ever said I am a woman banker or a woman VC,” she underlines, adding that it for the first time she was learning the difference between a woman and a man. Coming from a family of lawyers in Ranchi, Jharkhand, Mazumdar and her younger brother were always treated equally. “My parents never discriminated between a son and a daughter,” she says.

The investment banking stint too didn’t have any chauvinistic strain. “My colleagues never treated me differently,” says Mazumdar, who turned a VC when she joined A91 Partners in May 2019. As a funder too, gender never cropped up. She worked closely with Abhay Pande, general partner, and the team at A91. “All were supporting, encouraging… and it was a terrific atmosphere,” she recalls, adding that Sugar Cosmetics was one of the portfolio companies of the fund that she was deeply involved with.

Once Mazumdar donned the founder hat, there was nothing sugar-coated. “When I became an entrepreneur, it actually hit me hard,” she says in a candid conversation with Forbes India. “I've been asked questions that I don’t think a man would ever be asked,” she says, narrating one of the ‘shocking’ incidents. Recently, a VC called her and confessed that he missed out on an opportunity to invest in Foxtale’s last round of funding. The Mumbai-based startup raised Rs5.5 crore in seed funding in August 2021 from Kae Capital and a clutch of angels such as Kunal Shah (founder of Cred) and Rohit MA (co-founder of hospital chain Cloudnine Hospitals). In June this year, Foxtale raised another $4 million (around Rs30 crore) in its pre-Series A round led by Matrix Partners India and Kae Capital. “It was a bad miss,” the VC quipped. But what came next was something Mazumdar was not prepared for. “I thought Foxtale was your hobby and you would never do it seriously,” the funder reckoned.

“Seriously!” an enraged Mazumdar replied. “I am a banker and a VC. How could this be my hobby?” she retorted. Foxtale hit the market by rolling out four products—cleanser, Vitamin C serum, moisturiser and sunscreen—last December. From low single-digit units sold daily to begin with, the numbers have jumped to over 200 every day now, and the D2C skincare startup is eyeing to hit a revenue run rate of Rs100 crore by mid next year. “What made you think that I am doing this as my hobby?” she asked. Also read: Betting on beauty: What's driving sudden investor interest in the business

Unfortunately, the VC was not alone to have a ‘sexist’ perspective. There were other culprits, too, who consciously or unconsciously kept on harping the gender issue. One of the HR recruitment agencies Mazumdar contacted for hiring senior talent also came up with a ridiculous reason for its inability to recruit. “The potential candidates are not sure if you are serious with your business or if you would be in the game for the long run,” the HR consultant replied. Other sceptics popped up from the circle of friends and colleagues. “I think she has enough savings for a couple of years. If things fail, she will come back,” was one of the uncharitable remarks. A few made her see the silver lining. “Do an MBA if Foxtale doesn’t work out. In the VC world, you would be valued more.” Also read: Women at work: Can we bridge the gender pay gap once and for all?

Mazumdar was not bemused at all. What, though, turned out to be a tipping point in her transformation from a soft-spoken and polite woman to a feisty and stern founder was her encounter with one of her vendors. Something went wrong on the part of the supplier. To hide his fault, he raised his pitch and started arguing. The heated conversation was not about logic, but who could speak louder. Mazumdar was forced to up the ante. “The moment I raised my voice, which was louder than him, everything settled down,” she recalls, adding that she never felt the need to either sound or act in an assertive manner. “I was never an alpha person, and always had high EQ (emotional quotient),” she says.

Over a year into entrepreneurship, things have changed. “I never wanted to be identified by my gender,” says Mazumdar. “But now I proudly say that I am a woman entrepreneur,” she stresses.

Interestingly, what has also changed is the way a funder-turned-founder looks at things. She explains. “The power on the table changes,” she smiles. As a VC, one focuses on the problem, the addressable market and the numbers. During an investment pitch, the concluding remarks of VCs usually were something like, “Okay, I get your story, but where are the numbers?” Now, as a founder, Mazumdar talks about a different perspective. The narrative changes from asking about numbers to storytelling and passion. “I don’t have numbers, but there is a story, and companies can't be built without stories,” she says. As a founder, she underlines, one has to focus on solutions. “Problems toh har roz aate hain (There are problems every day).” Also read: Having more power at the bargaining table helps women—but also sparks backlash

Back in 2020, during the fag end of the pandemic year, as a VC, Mazumdar identified an interesting problem. A host of skincare brands, she observed, were able to grow only on the back of rolling out new products. What was missing, though, was consumer stickiness. Most had low repeat rates. “There has to be more customer loyalty in skincare,” she says, adding that brands like Pond’s or skincare counterparts in the US had high repeat rates. “I want a Rs1,000-crore brand with a 20 percent Ebitda (earnings before interest, taxes, depreciation, and amortisation) margin,” she says. Focus on repeat users and word-of-mouth marketing have enabled Foxtale to grow without increasing cash burn dramatically, she claims. The startup will roll out five more products over the next two months and will focus on tapping into the Tier III and beyond markets.

The backers are delighted with the initial push. The beauty and personal care market in India has been growing fast and is expected to become a $28-billion market by 2025. “DTC brands will contribute around 16 percent of this pie,” reckons Sunitha Viswanathan, partner at Kae Capital. In spite of larger well-established players, there was a white space for a DTC brand to come in with a strong value proposition. “We knew a right team would be able to build a large business. We found that in Romita’s thinking and approach,” she says. Foxtale, Viswanathan underlines, germinated after conducting intense research with over 3,000 women. Customers wanted efficacious products that worked. If this can be done at an affordable price point, then there is no reason why Foxtale cannot grow to become the leading skincare brand in India, she argues. “Romita marries the customer’s needs well with building a business, keeping in mind unit economics and scalability. That stood out most for us,” she adds.

The challenge, though, for the skincare challenger brand would be to ensure stickiness even when it achieves scale. Viswanathan explains. Foxtale has demonstrated that it can launch products that work. Like any DTC brand that wants to scale, Foxtale will need to ensure that customer acquisition happens cost-effectively. “It has to show strong repeat rates even at scale,” she adds.

Mazumdar, for her part, is confident of making it big. Efficacy, she claims, is one of the biggest selling points of Foxtale. A formulation team headed by Dr Ramesh Surianarayanan—who has had stints at Himalaya and Unilever—will ensure that the product development engine keeps user community at the centre. From identifying which products to launch to testing them to finalising the packaging, Foxtale tries to include feedback from users in every step of the product development. “Unless the products have over 90 percent of repeat rates, we don’t launch them in the market,” she adds. Also read: What we need to do to really empower and enable women
Ask her what’s her biggest learning as a founder, and the first-time entrepreneur sums up her experience in one sentence. “You can’t be soft spoken and polite as a leader. I don’t know if it’s a good learning or a bad one,” she says. Something, she lets on, has changed in her personality and this has worked well. When you are a founder, she explains, people rally around you for the vision you have. “You need to have a very strong clarity, and that clarity needs to be translated in a very assertive way,” she signs off.