Founders' Corner: What old and young entrepreneurs can learn from each other 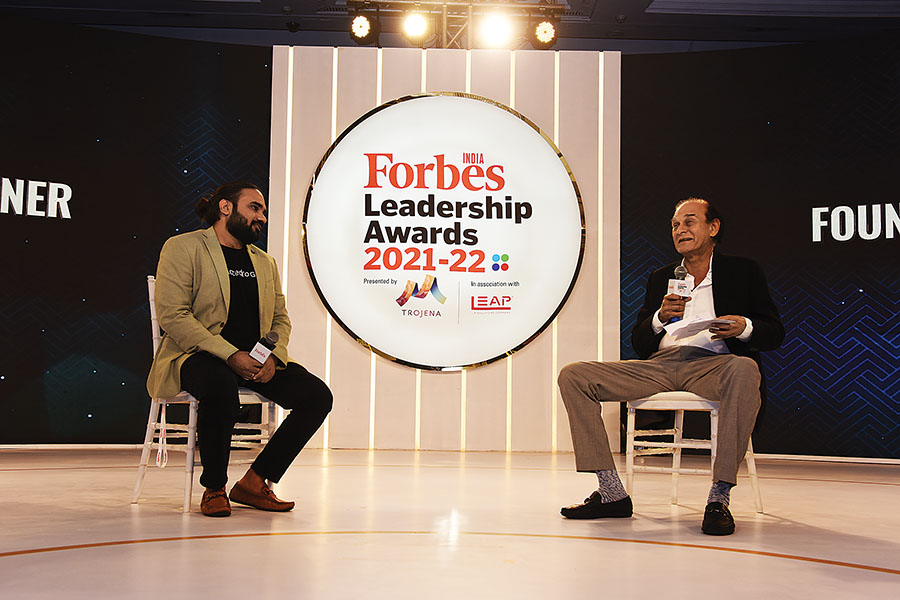 Leadership is a constant challenge when the way people do business, raise capital, sell products and concepts are constantly evolving. India sees a new unicorn being pronounced almost every week; in such a scenario, it is critical to decode entrepreneurship and building a business. Entrepreneur and investor Harsh Mariwala, chairman and founder of consumer goods giant Marico, chatted with Tarun Sharma, co-founder and CEO of caffeinated personal care startup mCaffeine, at the ‘Founders’ Corner’ session at the 2022 Forbes India Leadership Awards on March 25. Leading teams, sourcing the right talent, how to sell and innovating constantly were buzzwords of their candid conversation.

Mariwala had joined the family-run business of Bombay Oil Industries in 1971, and saw a branded FMCG market in coconut and refined edible oils, which led to the creation of Marico in 1990, just prior to the economic liberalisation programme. Sharma, on the other hand, is a new-age entrepreneur, who along with co-founder Vikas Lachhwani, launched their startup in 2016, targetting millennials, through caffeine-infused personal care products.

Mariwala started the session with an anecdote about struggling to convince people to join Marico, located in the crowded bylanes of Masjid Bunder, Mumbai. He then started to interview people at the upscale Willingdon Sports Club and convinced interviewees that they would soon move office.

“As an entrepreneur, you don’t give up,” he recounts. Mariwala had already achieved management separation from the rest of his family to run Marico as an independent company. In early years, expansion was always led by primary research. Mariwala used to travel to small villages in interior Maharashtra and Gujarat to appoint distributors for his products. “There were no hotels for meetings. I often stayed with them at their homes. As an entrepreneur, you have to find ways to resolve issues,” he explains.

Sharma spoke of a different concern when starting out to raise funds. The constant question posed to Lachhwani and him was whether someone had launched a similar venture overseas. “How would an entrepreneur be able to do this for the first time in India if they are repeatedly asked this question?” he asked.

In Marico’s early years, Mariwala studied the potential market “outside in” by interacting with thought leaders and then decided if there were opportunities to leverage upon. He spoke about how Marico innovated to differentiate itself by launching the savoury masala oats, under the Saffola brand, as a breakfast meal, from just plain oats earlier where his battle was with the well-established Kellogg’s and Quaker brands. This is now a ₹300 crore market where Marico has a near-90 percent market share. “You need to combine trends with innovation and insights,” says Mariwala.

Sharma explains how they wanted to reach their target audience of millennials in the most convincing manner. mCaffeine has created a caffeine student army, which provides research and education to the company. It tied up with a highest charted influencer in a #mancrushMonday campaign to define and provide ideas. “Use data to make better decisions,” says Sharma. 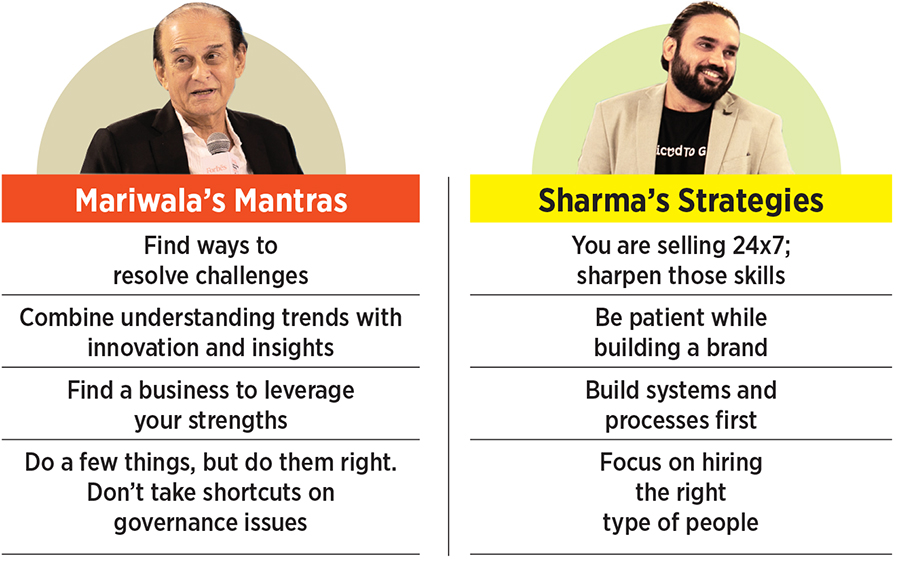 With a multi-decade experience as an entrepreneur and now investor, Mariwala tells young business aspirants: “Get into a business where you can leverage your strengths. Also, do a few things, but do them well. It is also okay to fail, but learn from your failures. Go to the market and test these out.”
He also stresses on spotting the right talent and ensuring strict governance. “Entrepreneurs tend to take a shortcut when they are starting out, but they should not,” he adds.

Sharma sought Mariwala’s advice on whether a team should be built “like a family” or a “sports team”? Mariwala says the interest of a company comes first: “The issue of loyalty is not relevant… if you try to be loyal to them and they are not good enough, it will impact business.” My key learning as a founder, says Sharma, has been to “constantly sharpen sales skills. Aap har waqt bech rahe ho (You are selling 24x7). Also, one should be patient while building a brand”.

The session ended with Mariwala being candid that he had a lot to learn from D2C (direct-to-consumer) startups like mCaffeine. “What we saw as entry barriers earlier have all gone,” Mariwala says.
Marico today runs acquired brands such as Beardo and Just Herbs very differently from their homegrown FMCG brands, because the mindset is different for both. Sharma stressed that they are still learning how to hire the right people, and building systems and processes first, rather than only chasing targets.