Sitharaman announces stalling of fresh insolvency proceedings for a year

Experts caution that this may lead to greater flux and unintended consequences; meanwhile, expenditure on public health has been hiked, MGNREGA allocation increased 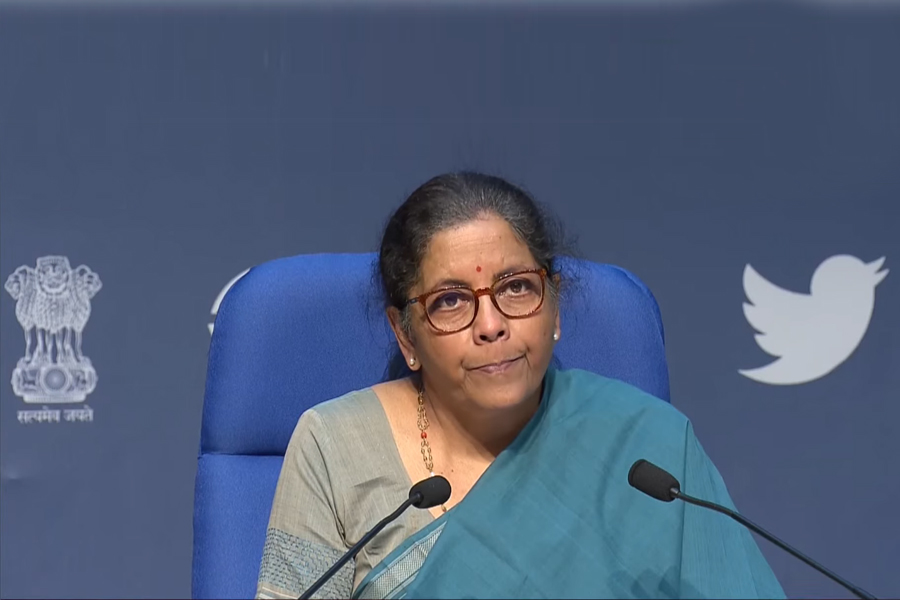 Finance Minister Nirmala Sitharaman on Sunday, in the fifth and final tranche of economic packages announced to curb the damages of Covid-19, announced that there would be not fresh insolvency proceedings against companies for a period of one year. An ordinance will be passed to this effect. She also said that the minimum threshold level to initiate Insolvency and Bankruptcy Code (IBC) process is being raised to Rs 1 crore from Rs 1 lakh. This will be a major source of help to protect the micro, small and medium enterprises (MSMEs) from being pushed to court under the IBC. In a related measure, Sitharaman said that Covid-19-related debt has been exempted from the definition of ‘default’ under the IBC for the purpose of triggering insolvency proceedings. Sitharaman also disclosed that a fresh policy will be announced so that private entities will be allowed to participate in all sectors. Another important measure was that the budget allocation under MGNREGA (Gandhi National Rural Employment Guarantee Act) is being raised by a further Rs 40,000 crore from the existing Rs 61,000 crore.

With India still reeling under the impact of the coronavirus, Sitharaman said the public expenditure on health will be increased. Public health laboratories will be created at block levels in each district in India. District hospitals are to have an infectious disease ward. Wellness centres in urban and rural areas of India will be ramped up, she said. All of the measures announced by Sitharaman this week are part of India’s Rs 20 lakh crore package (see table) and would work out to be one of the largest amongst all big economies, amounting to approximately 10 percent of the country's GDP. 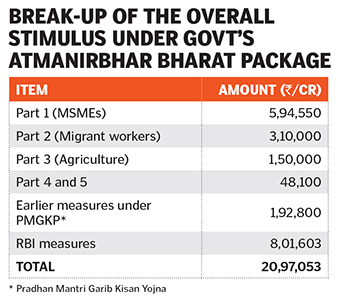 “A binding framework of resolution outside of IBC has found very little success in the Indian market. Suspending IBC in entirety, while it looks like a relief to corporates, could actually lead to the corporates being in a state of flux—all creditors coming together without the sword of IBC on them has never really won the popularity vote,” says Veena Sivaramakrishnan, partner, Shardul Amarchand Mangaldas. “While the MSME amendments have given some breathing space to the sector, the blanket suspension of defaults on account of Covid-19 could lead to unintended consequences,” she said. Bankers further say that suspension of insolvency will hurt banks and non-banking financial companies (NBFCs) as it would lead to more slippages and lower recoveries. Sivaramakrishnan argued that a company should not refer itself to insolvency and a parallel regime of resolution will need to be discussed in coming months. Leaving out the option of resolution automatically opens the door for recovery, and this could be a huge unintended consequence of the blanket suspension, she said. Sitharaman did not announce any direct measure to support airlines, small hotels or travel agencies whose businesses have come to a halt due to the outbreak of Covid-19.  Local airlines have not yet got a go-ahead from the government to resume flights. Investor sentiment to the range of all these announcements has been rather sluggish through most of the week. The benchmark 30-share Sensex has edged up just 0.39 percent in the week since the announcement on May 12. On the issue of funding of this Rs 20 lakh crore plan, Sitharaman merely told the media: “You must allow it for a bit later (to discuss the fiscal deficit).”

Several of the steps which Sitharaman had announced in the five-part series this week, were already announced in the budget earlier this year. “The actual fiscal impact of today’s steps will be smaller, which brings the total cost of additional incentives announced to at least Rs 1,02,000 crore,” Rahul Bajoria, chief India economist at Barclays said. “Taking into account the spending on balance sheet, by our calculation, this leaves the government with room for another Rs 99,000 crore of incremental spending, which might be announced over the next few days,” Bajoria said.