Arpit Chug, and the quest to remain razor sharp

After 17 years at American Express, Chug was looking for a challenge to upset his structured life, and he found it in Harshil Mathur's Razorpay 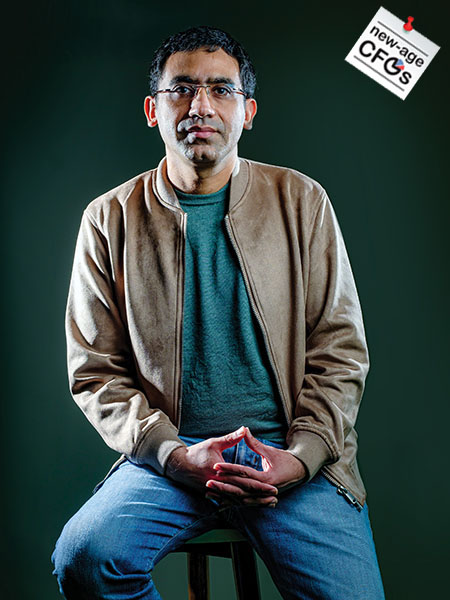 It was an exciting start to Arpit Chug’s professional life in 2000. After completing his graduation from Shri Ram College of Commerce in Delhi University, he did his MBA from IIM-Ahmedabad and then joined foreign equity brokerage company CLSA in Mumbai. The role was thrilling. While in the first year Chug tracked FMCG and pharmaceutical stocks, the next year, he was part of the team looking into Nasdaq listings for some companies. The ample exposure to the banking side of the business came as a bonus for the Delhi lad who was enjoying the stirring life of an investment banker. “I was even part of the first few American Depository Receipts (ADRs),” he recounts.

The adventure continued. In August 2002, Chug joined American Express and relocated to the US. The job was to visit different offices of the American biggie and work on projects of all kinds. Over the next few years, Chug’s involvement in the financial aspects of the business deepened. “I was enjoying such roles,” he says. In 2010, he became the CFO of the travel business.

After three years, he moved to India, and apart from being CFO of the India business, Chug was heading treasury for the Asia-Pacific, which meant 14 markets that American Express was present in. ‘A large business, billion dollar plus revenues and significantly large P&L’ is how Chug sums up the high point of his long tenure. “Amex was great for me,” he says. “I got to do a lot of things in a very structured environment.”

Then came a sharp turn in 2019, when Chug discovered something startling. His ‘structured’ way of life had robbed the excitement off his role. Call it one of the flip sides of having an extra-long innings at huge multinational corporates, it makes you feel jaded as processes become mundane, and challenges are hard to find. Chug started yearning for a life where he would be constantly challenged, and where he could get his edge back.

Meanwhile, Harshil Mathur was looking for someone who had a strategic vision for his fintech startup Razorpay, which had its biggest fundraise of $75 million in 2019, and was fast galloping towards unicorn valuation—privately-held companies valued at $1 billion or more. The co-founder and chief executive officer (CEO) wanted a multi-dimensional CFO. “We were not limiting the search to whether the candidate belonged to a CA background or not,” he recounts.

A CFO, Mathur was clear from day one, needed to have more than top-notch financial and accounting skills. The role in new-age companies involves a broad understanding of the organisation’s operations, products and services, customers, vendors, employees, and shareholders. “We wanted someone who could lead,” he adds. 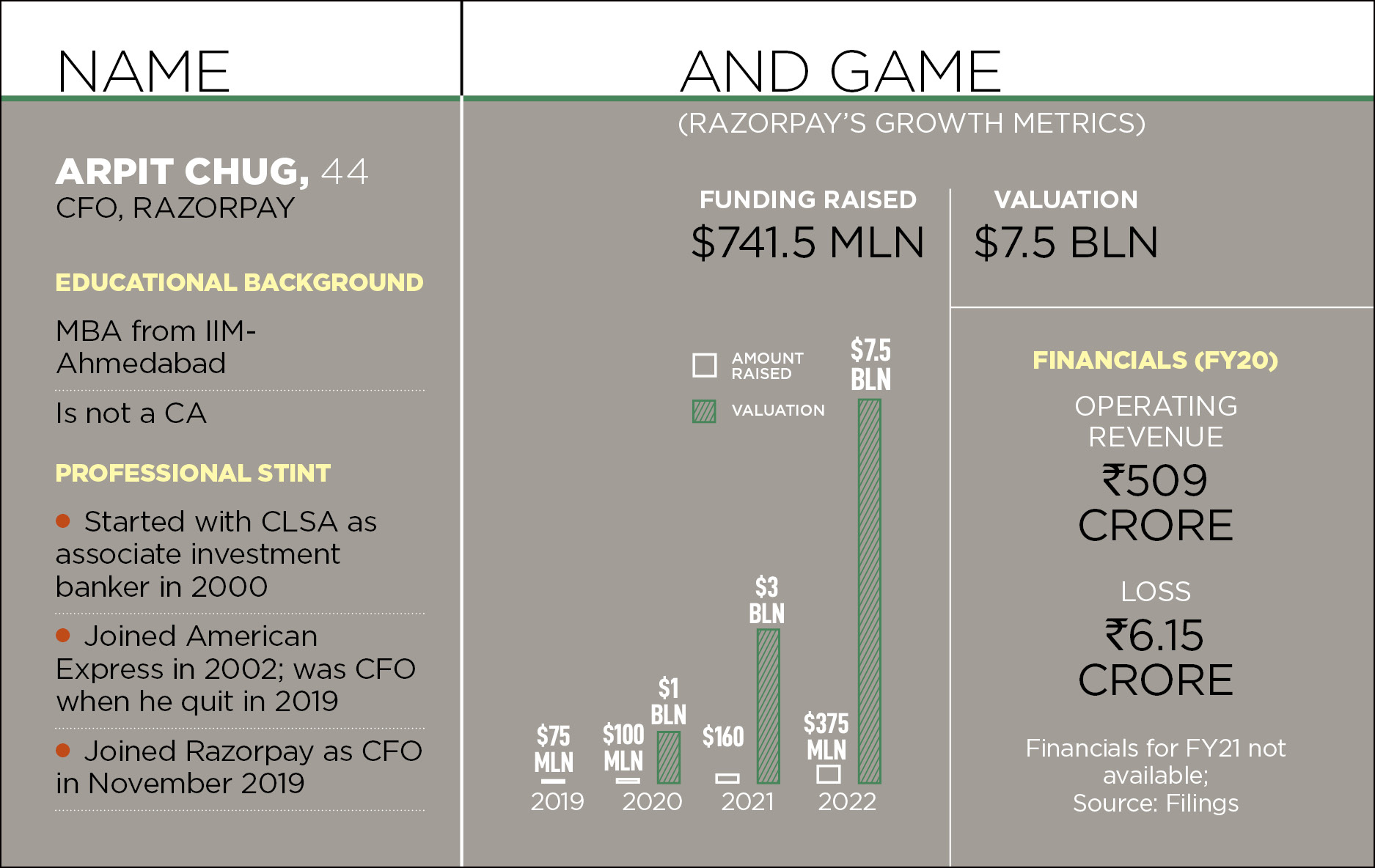 Enter Chug, and the new CFO started firing on all cylinders. Just look at one metric, of mopping up funds. In 2020, a few months after joining Razorpay, the fintech startup raised $100 million at a unicorn valuation. The fireworks continued. Next year, in 2021, Razorpay raised another $160 million. This time the valuation soared to $3 billion. The same year, it raised the biggest round of $375 million, and took the valuation to a staggering $7.5 billion. If Chug was looking for impact in his new stint, he could not have asked for a better place and a better role.

The CEO is delighted with his prized catch. “For us, Arpit was an ideal fit,” says Mathur. The new recruit not only came from a rich background in terms of strategic insights but also had a clear vision and direction for the fintech company.

The CFO has not only been instrumental in managing the day-to-day finances of Razorpay, but also in its rapid growth journey, he says, adding that the days of plain-vanilla CFOs are over. The new role is a unique blend of right-sizing the organisation’s talent and technology investments, assessing risk intelligence, and creating access to forward-thinking strategies.

Razorpay is not the only new-age firm to have a CFO who is looking at multiple functions in a holistic manner. The new breed of CFOs, reckon industry watchers, is breaking the silos of finance. “India is going through a transformation,” says Sandeep Kher, director (finance) at Sequoia India and Southeast Asia. Newer businesses and models are getting established and becoming mainstream. “The evolution of the CFO is happening rather dramatically, and it’s a great time to be in this role.”

Kher explains how CFOs at startups have a differentiated approach. They are more hands-on, and integrated into the day-to-day running of the business. Given the hyper pace of growth and change that startups see, they are learning on the battlefield every day. While fundamental finance skills would always be paramount when one hunts for a CFO, the potential candidate must also be a visible leader in the business, an excellent communicator and an influencer.

But why are so many non-CAs becoming CFOs? Kher reckons it’s more to do with ‘horses for courses’. If a particular person with certain skills and experience can better meet the demands of the role than others, then why not.

Meanwhile, Chug is elated to get the excitement, and sharpness, back in his life. What excites the CFO most is finding solutions rather than spotting a problem. “How can we make this happen?” is what Chug keeps asking his leadership team across verticals as he gets busy raising the bar a notch higher. Well, that’s the only way to maintain your razor edge.