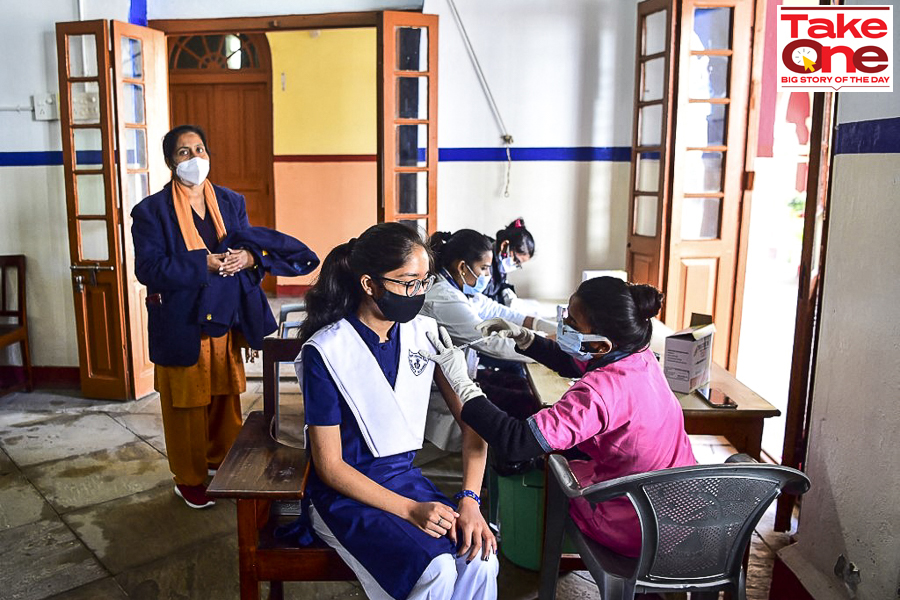 A health worker inoculates a student with a dose of the Covid-19 vaccine at a school in Allahabad on January 12, 2022.
Image: Sanjay Kanojia / AFP

It’s been a frantic few months in the country.

Covid-19 caseloads have been on an upswing since early January, with lakhs of people being affected in the third wave. As of January 26, the seven-day moving average of cases stood at 307,532 cases.

“We are urging the government to allow everyone above the age of 18 to take boosters,” Adar Poonawalla, the chief executive of the Serum Institute of India tells Forbes India. “We have recommended that everyone over the age of 18 should be given a dose with a six-month gap.” The government has been handing out the precautionary dose or the third dose with a nine-month gap. Since the initiative was launched on January 10, India has given over 99 lakh precautionary doses to health care workers and people above the age of 60 with co-morbidities.

Yet, the low severity of the cases in recent times, especially with 75 percent of India’s population having received two doses of vaccines, has only meant that the fear is fast receding. “On May 7, 2021, at the peak of the second wave of Covid-19 when there were 4,14,188 new cases and 3,679 deaths, only 3 percent people were fully vaccinated. On January 21, 2022, there were 3,47,254 new cases and 435 deaths while fully vaccinated people are 75 percent now,” Lav Agarwal, joint secretary in the health ministry, said in a press conference.

All that might mean a spike in daily cases, most certainly, and the peak could be expected in February. Yet, hospitalisation, which has remained at around 1-2 percent compared to about 24 percent during the second wave, is also expected to be a big factor in India’s return to normalcy. Already, across Europe, there are indications that the Covid-19 pandemic is well on its way to its endgame, while in India, early indications are suggesting a plateauing of cases.

That’s also likely where the third dose of the vaccinations could come into play.

“This is the only strategy everywhere in the world,” Poonawalla adds. “The UK has already covered 70 percent with three doses. We are just waiting for government direction. Two doses was what was recommended in an emergency use because there was a shortage at that time. But actually, if you look at any vaccines such as for pneumonia, HPV, hepatitis, all these vaccines need three doses to prime your system properly and give you proper long-term protection.”

Poonawalla’s Serum Institute of India has already delivered 1.5 billion doses of the Covishield vaccine between January 2021 and December 2021. Of this, a significant portion was for the Indian market. Covishield, globally known as the AstraZeneca vaccine, has been administered to 88 percent of the Indian population. “We have delivered 1.5 billion doses from January 2021 to December 2021, which is a record in itself. Most of that was to India. In terms of manufacturing ability, we have over-delivered. We were saying we would make 100 million a month which would translate to 1.2 billion. And we gave 1.5 billion,” Poonawalla says.

The Indian Sars-CoV-2 Genomics Consortium (INSACOG) of the Department of Biotechnology, in its weekly bulletin dated January 10, published January 23, said that the Omicron variant of the coronavirus is in community transmission in India and is becoming dominant in multiple metros.

“Omicron is spreading fast. There is a four-week sharp rise, which stays for a week or two, and then there is a sharp fall,” says virologist V Ravi. “Cases in Mumbai and Delhi are declining, while Bengaluru is reaching a peak now. Like the first two Covid-19 waves, even Omicron will start moving to the districts and rural areas from cities now.”

The Union health ministry, on January 27, said that Maharashtra, Uttar Pradesh, Delhi, Odisha, Haryana, and West Bengal were reporting a decrease in Covid cases and positivity rates, while Karnataka, Kerala, Tamil Nadu, Gujarat, Andhra Pradesh and Rajasthan have been recording a record number of cases.

Dr Lingaiah Amidayala, medical director, Yashoda Hospitals Hyderabad, says that he has observed fewer hospital admissions this time around compared to the first and second Covid-19 wave. “Majority of the patients are treated on an out-patient basis as they have very mild symptoms,” he says, adding that vaccinating the total population is the “ideal way of preventing the infection”, apart from Covid-appropriate behaviours like masks, hand hygiene, and physical distancing. 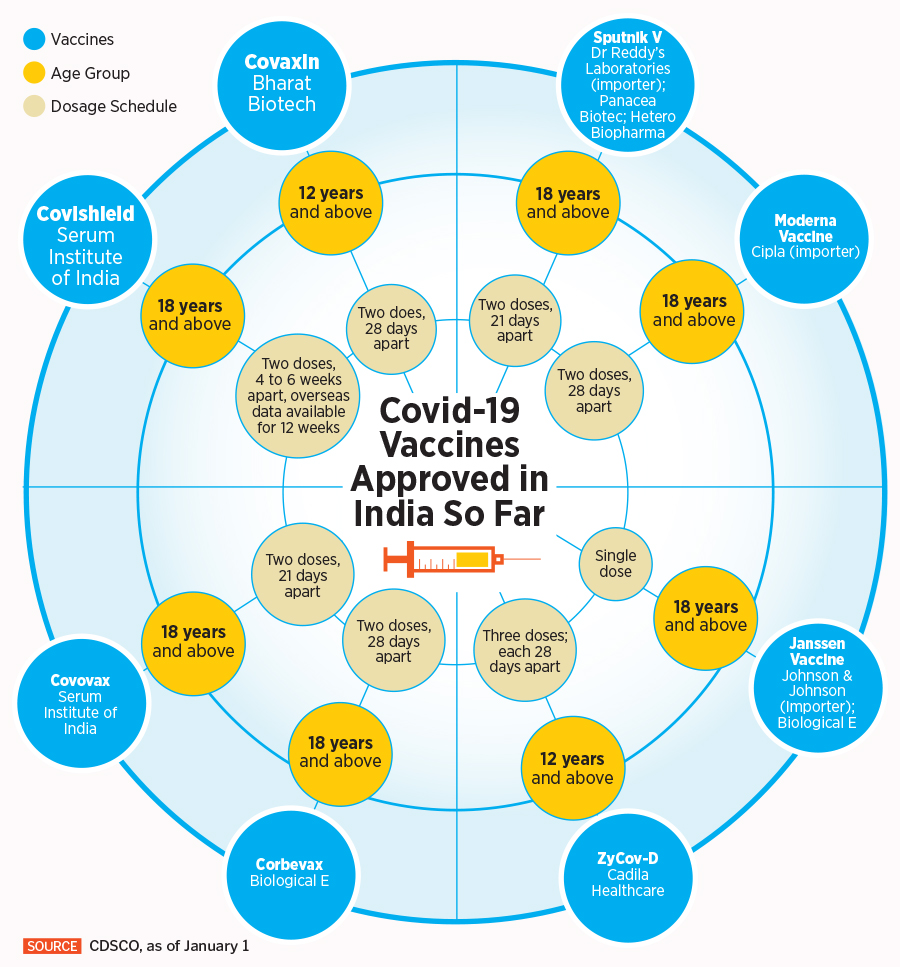 “To end the pandemic, we have to vaccinate everybody with a minimum of two, if not three doses so that we can really protect ourselves and reduce the transmission everywhere,” Poonawalla agrees. “I believe this should happen globally by the end of this year because there is no shortage now and Serum is also well-equipped in terms of meeting with the demand for boosters.”

The pace of vaccination in India, meanwhile, has slowed down. As per data from the CoWin portal, the average doses administered in the week ending January 26 was 3.99 crore, down from 4.87 crore doses in the preceding week. Experts Forbes India spoke with say that at this time, it is important to keep the focus firmly trained on Covid-19 vaccinations, precautionary doses, testing, genome sequencing, and following Covid-appropriate behaviour.

“Precautionary dose started late and the pace is slow,” says Dr Amidayala. “Before the spread of Omicron cases, if a precautionary dose was administered, the problems would have been less. Even now if the precautionary dose is given to all the people above age 18 years, and [we] start vaccinating children from age five and above, definitely the problems will be less. Reducing the time interval between the vaccines and following the 0, 1, 6-month schedule, will give better immunity and prevent the spread of disease.”

Dr Amidayala points out that vaccination is a challenge worldwide and India has vaccinated its population better than many countries, but there is a need to increase the production of vaccines and provide precautionary doses to the entire population. Availability of vaccination could be a challenge, according to him.

Immunologist Satyajit Rath says that as a matter of practicality, India could not be in a situation to provide precautionary doses to health care workers and senior citizens or other at-risk people with severe illness or co-morbidities earlier because “we never ramped up vaccine production, never enhanced our vaccination implementation system to the point where we would have done what we said, which is vaccinate the [entire adult population of the] country before the end of the last calendar year”. 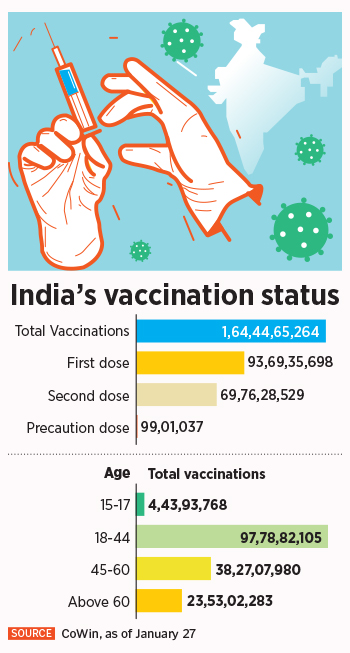 India had set an ambitious target of administering 188 crore vaccine doses to its adult population by December 2021. As of January 27, the country had administered 164 crore doses, with 94 crore people having received the first dose, and 70 crore people being fully vaccinated with both doses. “Under such circumstances, it is always going to be a trade-off. If we are going to give precautionary doses, then we have to take doses away from there. Then the whole conversation becomes one in a vacuum—should we have done this differently? Yes, we should have,” says Rath, who is a visiting faculty at the Indian Institute of Science Education and Research in Pune.

The Serum Institute of India has two vaccines in its portfolio. “Different ones have different usage,” Poonawalla says. “Covovax will go to under-18s after March of this year, Bharat Biotech will also be there, and Covishield can be a booster for everyone to take.” The company has a capacity to manufacture 4 billion doses a year now, with 2 billion each for Covovax and Covishield.

“But there’s no demand to that extent. I mean, we probably won’t even sell more than a billion doses in 2022. I've got 500 million doses of stock lying in my warehouse right now,” Poonawalla says.

At a recent panel discussion hosted by Neuberg Diagnostics titled ‘Variants, Vaccines and Us’, health experts agreed that Delta and Omicron variants will co-circulate, and it is important to prioritise vaccination—including of kids and booster / precautionary doses—and RT-PCR testing.

Omicron has extremely high transmission efficiency, far more than Delta, and also a propensity to evade immunity induced by past infections and vaccinations, which are conferred by a large number of mutations on its spike protein gene, said virologist T Jacob John, former director of ICMR’s Centre for Advanced Research in Virology, retired professor and head of the department of clinical virology and microbiology at CMC Vellore. At the panel discussion, he also emphasised vaccinations for children, saying that children are at high risk of Covid infection, particularly Omicron, and if they remain unvaccinated, they will “act as a virus reservoir”.  India, which started vaccinations for adolescents aged between 15 and 17 years on January 5, has administered close to 6 lakh doses as of January 27. At present, India has approved two vaccines for children between the ages 12 and 17-–Covaxin by Bharat Biotech and ZyCov-D by Zydus Cadila.

Ravi, who is the head of R&D at Tata Medical & Diagnostics, recently developed an Omicron-specific testing kit. He says that there is a need for better testing strategisation and surveillance for quickly picking up new variants. Strategies need to be dynamic and change as per available evidence and tools, according to him. “We have enough infrastructure of hospitals, PCR and genome sequencing, but co-relation to clinical data is weak and needs to be strengthened,” says Ravi, who, at the panel discussion mentioned above, also said that it is too early to put in place a policy for annual vaccine shots against Covid-19, and that “unless everybody is protected, nobody is protected, so we need to ensure vaccine equity.”

Rath calls for decentralisation. “Everybody is focussing on national statistics, but outbreaks happen locally,” he says. “We need robust local information from all parts of the country in terms of testing, positivity rates, and percentage of positive tests being sequenced locally, apart from data on local hospital bed occupancies, vaccination, and precautionary dose-related information.”

Tweets by @forbesindia
India's IT-BPM sector has concerns over exemptions in data bill; Apple posts record sales; Lee Fixel's Addition backs SuperOps.ai
A joke between Elon Musk and McDonald's has given rise to a new cryptocurrency