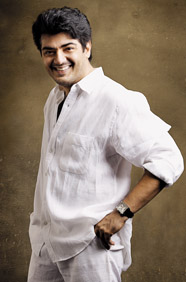 It's telling that Ajith played the same cameo role in the Tamil version of English Vinglish that Amitabh Bachchan did for the Hindi version. And not Rajinikanth. For his passionate fan following Ajith is the next Rajinikanth. But, he is also getting old. He makes no bones about it. In his latest hit film Mankatha, he plays a character who is as old as he is.
Fast Facts : Ajith is passionate about driving, and has participated in Formula races.