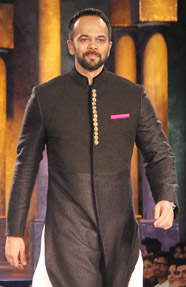 He started his career at age 17 as the assistant director in Phool Aur Kante (Ajay Devgn's debut film). Over the years, Shetty has churned out one blockbuster after the other: The Golmaal trilogy, Singham, Bol Bachchan, all starring Devgn. His next film Chennai Express starring Shah Rukh Khan is slated for release this year.
Fast Facts : Shetty is one of the highest paid directors in Bollywood and is the only one with three Rs 100-crore films to his credit.