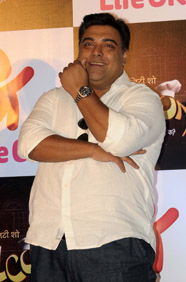 Kapoor challenges every stereotype of a male sex symbol, and yet there he is every night romancing one of the most desirable woman on Indian television, Sakshi Tanwar, in Sony's hugely popular daily show Bade Achhe Lagte Hain. He essays the role of an overweight businessman in a modern day adaptation of Pride and Prejudice. His career in Bollywood is still in a nascent stage, although he has found cameo roles in movies like Udaan, Ek Main Aur Ekk Tu and Student of the Year. He will soon be seen on a new cooking-based celebrity show, Welcome - Baazi Mehmaan Nawazi Ki.