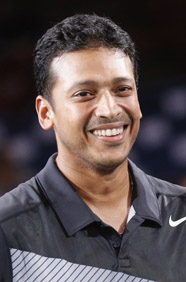 Winning the 2012 French Open mixed doubles with Sania Mirza (Rank 59) was a fantastic achievement for the Indian pair. While the London Olympics were a low point for Indian tennis on and off court, Bhupathi-ranked world No. 11 in doubles-and his men's doubles partner Rohan Bopanna put in a series of strong performances, winning the ATP 100 event in Paris and reaching the final of the World Tour in London. Off court, he's the head of sports media consultancy Globosport, which also runs a tennis academy, and sports365.com (an online sporting goods portal).
Fast Facts : In January 2012, wife Lara Dutta gave birth to their daughter Saira.