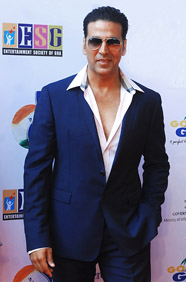 Bollywood's Khiladi broke into the big league with two movies, Housefull 2 and Rowdy Rathore, in the period under consideration. Both crossed the Rs 100 crore mark in revenues. Oh My God and Khiladi 786 were also successful, but Joker bombed at the box office. In all, 2012 has established Kumar as a dependable star and expectations are high from his three releases in 2013.
Fast Facts : Kumar was the top tax-payer in Bollywood for the last financial year.