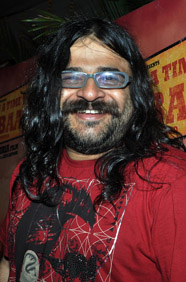 In his initial years in Mumbai, he made ad jingles and collaborated with small-time musicians. He made it big in 2004 with Dhoom and since then, has become Bollywood's musical 'hit machine', though he's often been criticised for copying tunes. Last year, his music for Barfi! was hugely appreciated as it saw him break out of his comfort zone and create a charming old world melody that elevated the film to a different level.
Fast Facts : Before moving to Bollywood, Pritam was a part of Bengali rock band Chandrabindoo. He is also trained in African music from musicologist Kedar Avati.