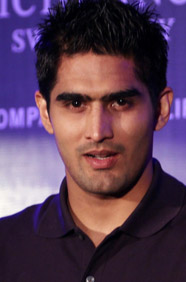 The strapping boxer from Haryana has managed to successfully ride the wave of fame that followed his bronze medal at the Beijing Olympics. While his recent achievements in the ring may not have been up to his own standards, he has been able to successfully monetise his image. His good looks and personality lend themselves to television and he's more and more looking to become a reality TV star. It won't be long before you see him on the big screen too.
Fast Facts : He endorses four brands—more than many senior international cricketers.