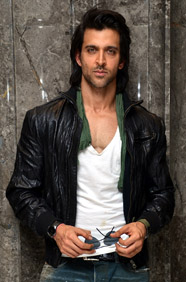 Hrithik Roshan followed up the success of Zindagi Na Milegi Dobara in 2011 with the superhit Agneepath, successfully reprising Amitabh Bachchan's role. This was Roshan's biggest commercial success. The year 2013 will be crucial for him as he comes out with the second sequel in his role as superhero Krrish. Also, he starts work on Shekhar Kapur's ambitious Paani, a film that deals with a future where water wars have broken out. He debuted on TV as a judge on "Just Dance".
Fast Facts : Roshan was crowned "sexiest Asian man in the world" in an online survey conducted by London weekly Eastern Eye.