From scooter rental to EV player: How Bounce morphed to survive the pandemic

Sequoia- and Accel-backed scooter-rental startup Bounce is morphing into a full stack EV player. Can it pounce on the big opportunity? 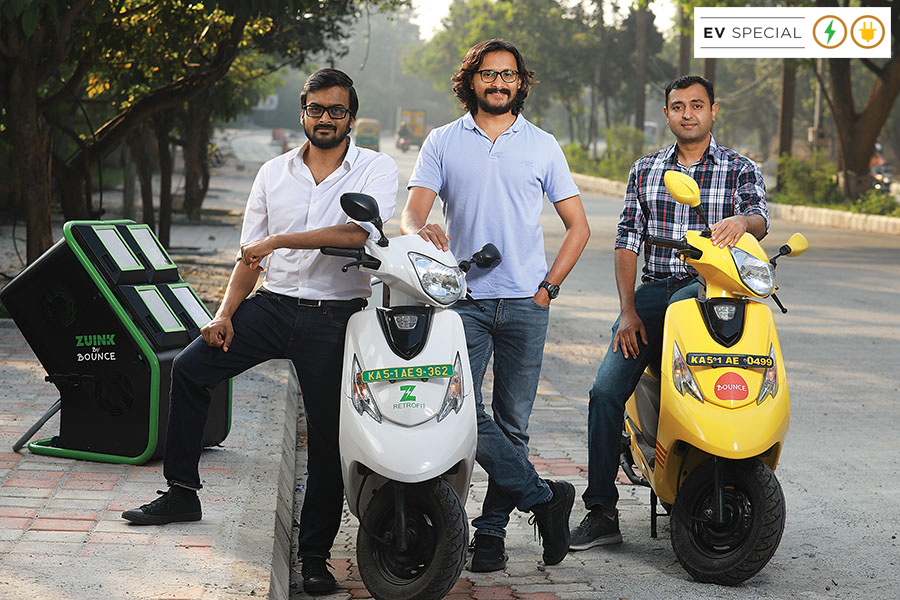 (From left) Co-founders of Bounce Vivekananda Hallekere, Anil G and Varun Agni are betting on battery swapping and building a high-quality scooter that won’t cost a bomb
Image: Selvaprakash Lakshmanan for Forbes India

March 2018, Bengaluru. Vivekananda Hallekere’s dream was turning into a nightmare. The chartered accountant, along with his friends Varun Agni and Anil G, had started his entrepreneurial journey in 2014. After four years, and experimenting with a bunch of ideas and prototypes, Hallekere and his gang had eventually found their mojo with Bounce. The scooter rental startup was making a decent ₹30-40 lakh per month, had a core team of five members and had built a fleet of 800 scooters operational across Bengaluru. Bounce had finally sprung to its feet.

One thing, though, was missing: VC (venture capital) backing. Till then, the friends had managed to raise ₹14 crore from a clutch of angels and friends. “When will VCs start queuing up to fund us?” quipped Hallekere to his friends.

His wish soon came true. On a Monday morning in March, six VCs found themselves cramped in a small room in Bengaluru. “There was no place for all of them to fit,” recalls the first-time founder, who scurried around for a solution. One of the VCs was escorted to a Café Coffee Day outlet on the ground floor of the building; two were shifted to pigeon-holed meeting rooms on the same floor, and the rest managed to find space in the Bounce office. Hallekere got what he asked for: Bounce closed its Series A round of $10 million in June 2018.

Over the next two years, Bounce stepped on the gas. By January 2020, it had a fleet of 25,000 scooters across two cities; was doing 1.2 lakh rides per day; and overall had clocked 16 million rides so far. “We were at one-third of Bengaluru Metro,” says Hallekere. Metro was clocking 3 lakh rides. Bounce, in contrast, was 1.2 lakh. The same month, the shared mobility startup raised $105 million (around ₹748 crore) in a Series D round of funding led by Accel, and B Capital Group. Existing investors—Chiratae Ventures, Falcon Edge, Maverick Ventures, Omidyar Network India, Qualcomm Ventures and Sequoia Capital India—also participated. Armed with money, Hallekere was now set to enter Europe.

Then came Covid in March, and a rude jolt for ride-sharing businesses. “It was crazy,” he recounts. Bounce had been scaling and hiring massively, and suddenly everything shuttered. While the silver lining was raising a massive round in January, the flip side was that Bounce was burning from both ends.

Ballooning expenses on bike EMIs, fat operational bills and a hefty salary outlay were taking a toll. After exploring all options for four months, Hallekere decided to bite the bullet. “We downsized massively,” rues Hallekere. Other steps were also taken. All petrol scooters were sold to bring down the EMIs and Bounce, which had been piloting with some EVs in its fleet, decided to completely turn electric. 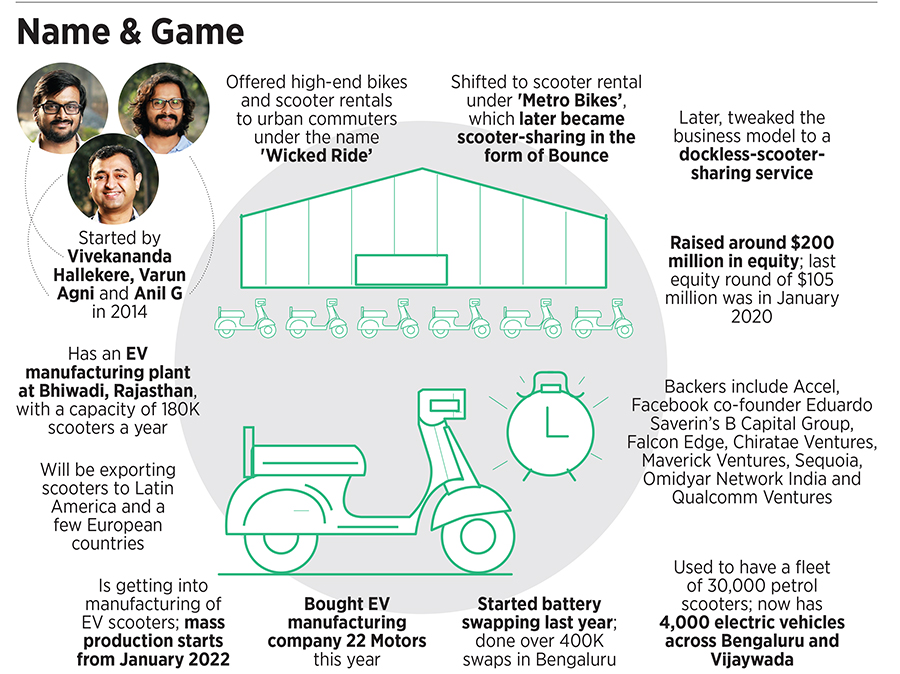 Fast forward to October 2021. Bounce has over 4,000 electric vehicles across Bengaluru and Vijaywada; does 20,000 daily rides across the two cities; and has built an extensive battery swapping infrastructure using mom-and-pop stores. In fact, last year, it did over 4 lakh swaps in Bengaluru alone. In October, it also bought EV manufacturing company 22 Motors to morph into a full stack EV player, which will manufacture scooters, and also continue with the rental and sharing business. It has also built an EV manufacturing plant at Bhiwadi, Rajasthan, with a capacity of 1.8 lakh scooters a year.

Hallekere explains why manufacturing EVs makes sense. Bounce, he says, has built a wide battery-swapping infra and had been in the scooter business for over seven years. What this means is great consumer insight and knowledge of users’ needs and pain points. “We will offer electric scooters without batteries,” he says. The move, he adds, kills all the apprehensions of consumers around EVs in one go—where to charge, how to charge, how much time will it take to charge, and replacement costs.

Removing the battery brings down the upfront cost of a scooter by around 40 percent. “Now it beats petrol scooters in price,” he says. Range anxiety, charging worries, price issues, and quality apprehensions are now all things of the past. “We are building a scooter for India, keeping in mind what consumers need,” he says.

Bounce’s transition to an EV player has found unflinching support from investors. “It’s a natural transition,” reckons Shailesh Lakhani, managing director at Sequoia India. Bounce, he lets on, is moving from ride-sharing to scooter-sharing to now making its own vehicles. The reasons are many. First, EVs have better economics and a larger user case. Second, Covid disrupted the ride-sharing business and hastened the transition to EVs. The Bounce team, Lakhani underlines, believes the current existing EV two-wheelers are not great products yet. “So there’s a gap in the market to create a great consumer product,” he says. Third, the EV push from states and the central government means a much more realistic chance of wider and mass EV adoption in the future. And lastly, rising fuel prices have made people take a closer look at EVs.

For Hallekere, taking a closer look at EVs didn’t happen overnight. Bounce had been building a battery-swapping infrastructure over the last year or so. The seminal learning was one: Charging won’t work in India. He tells you why. When there is hardly any space for parking, where would you find room for charging stations? he asks. “We have done over half a million battery swaps, and firmly believe that swapping is the solution in India,” he asserts.

What about competition from big boys such as Ola and Ather who are loaded with money and have a head start? Hallekere is not worried. “We love being an underdog,” he says with a smile. His confidence doesn’t come from any ‘David versus Goliath’ kind of stories. What gives him hope is finding a niche and playing a game that doesn’t pit him directly against the Olas, Athers and Hero Electrics of the world. While the others are still making premium scooters that need charging and are catering to people who have parking space and probably also a car, Bounce is going after the masses. “We are making for people who use two-wheelers for their daily commute,” he says.

Mass play in EVs can’t happen at a premium pricing. Bounce, Hallekere underlines, will build a sturdy, high-quality scooter that won’t cost a bomb. “My scooter without battery will cost as low as ₹36,000,” he claims. On the funding front, he claims the startup has enough runway. “We have enough money in the bank to take the product out to the market,” he says.

Bounce’s quest for a promising future, interestingly, rests on its past. “We understand scooters very well,” says Hallekere. What also differentiates Bounce is its vision against ownership in the long run. “Over the next 10 years, ownership will become redundant,” he says. Eighty-two percent of people in India, he says, don’t own a private vehicle. “Trust me, 82 percent of them having access to a personal vehicle is not good for society,” he says. A full stack electric model—from owning to renting to sharing—is the future of mobility in India. Bounce, he says, is not only redefining mobility but is building a scooter that India needs. “All of us will bounce together,” he signs off.