High frequency economic indicators for India all point to a positive bounce-back for FY22. But there are several moving parts and uncertainties which could still impact normalisation of growth in FY23 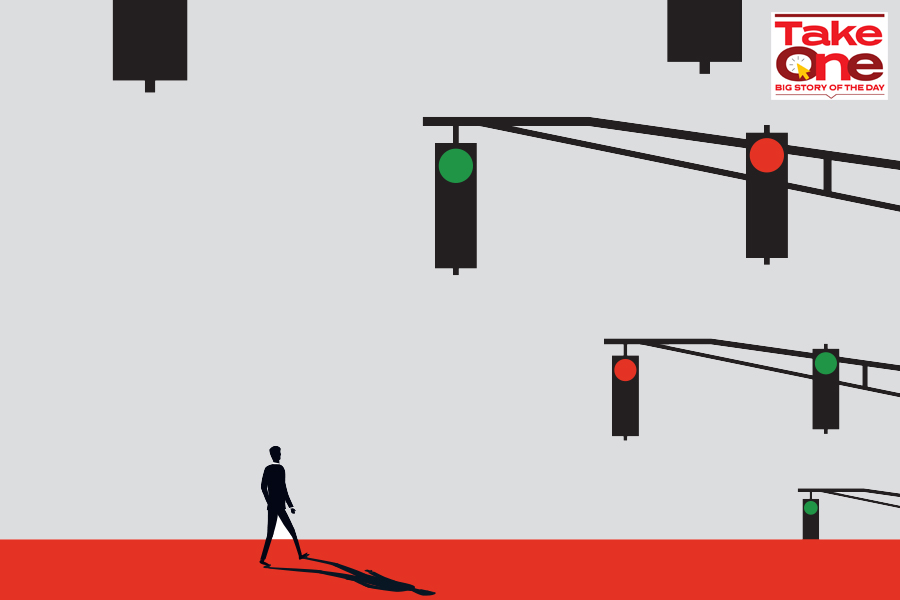 Eighteen months since the outbreak of the first coronavirus case in the country, India’s economy has started to breathe easier due to a relaxation of lockdown curbs and mobility. Most high frequency economic indicators have bounced back: Manufacturing activity in July is at a three-month high of 55.3 reflected through the IHS Markit Purchasing Managers’ Index, merchandise exports are at a record high of $35.2 billion in July and Google mobility trends (visitors to grocery stores, workplaces and recreation areas) showed a 10 to 40 percentage points’ improvement in July from their lows in May.
Elevated commodities prices will see steel and cement companies at the cusp of a fresh capex cycle. Ecommerce and fintech firms have also started to raise capital for growth and Indian equities have seen fresh investment inflows, all of which has pushed stock market indices to record highs.
But is this enough to indicate that India will see normalisation of growth in FY23? This would be the first normal financial year since FY19, considering that even the next 12 months were hit by the global slowdown. The IMF has projected India to grow faster, at 8.5 percent in FY23, compared to an estimate of 6.9 percent earlier. The World Bank forecasts a 7.5 percent growth for India while several equity research firms are pegging growth to be slower at between 6 to 6.5 percent.
Capex growth improving
Growth rates are not great, but are improving; Q12021 saw a capex growth of 11 percent which was on the back of a low base. “We will see levels shift [upwards] next year. Sectors outperforming this year will see capex growth next year,” says Rahul Bajoria, chief India economist at Barclays. But whether this will merely be a replacement cycle or investment towards a new greenfield project is difficult to ascertain at this stage.
Government capex would be focussed towards large infrastructure projects, which institutions such as the National Highways Authority of India (NHAI), NTPC, power companies and construction companies could provide a push to. With the new development financial institution (DFI) being created, access to capital for these projects will be easier.
The residential real estate space is starting to see a fresh allocation of funds, in the form of demand for larger second homes, which individuals are procuring outside of city centres.
“This will also drive demand,” says Abheek Barua, chief economist with HDFC Bank.
India’s economy will continue to see fresh investments towards education, from a hybrid model of digital and physical learning. Edtech majors Byju’s and rival Unacademy, besides acquiring online teaching platforms, have not ignored buying physical assets: Byju’s acquired Aakash Education Services while Unacademy is learnt to be in talks to pick up a stake in Sequoia-backed K12 Techno Services, which runs Orchid Schools.
The country’s battered healthcare sector will require more investments in the coming years, despite a current allocation of Rs 2.23 lakh crore for health and well-being and an additional Rs 64,180 crore over the next six years, through the Aatmanirbhar Health Yojana. But fresh government initiatives need to be in place for deeper private sector participation. 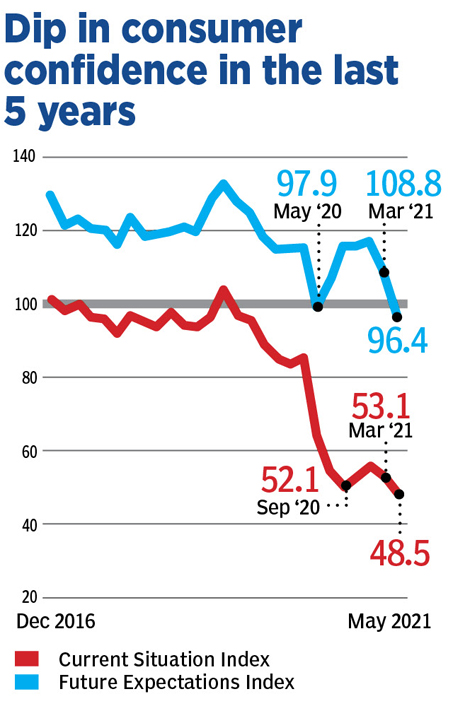 Traditional growth demand will come through exports and government-backed infrastructure projects. But if spending weakens, consumption might slacken further. The Reserve Bank of India’s Consumer Confidence Survey (released in June)–from over 5,000 households on the perceptions and expectations on general economic situation, employment scenario, overall price situation and own income and spending – is at a five-year low.
Barua says there has been “damage to household balance sheets” due to the pandemic. Rural areas are showing more stress, seen from the fact that banks are seeing more defaults in their gold loan portfolios.
Several moving pieces yet
There are some moving parts yet which might play out over the next 12 months. A severe third wave might push the government into another cycle of fiscal relief measures and the Reserve Bank of India to extend its accommodative stance–which it has held since the pandemic breakout–to boost growth. 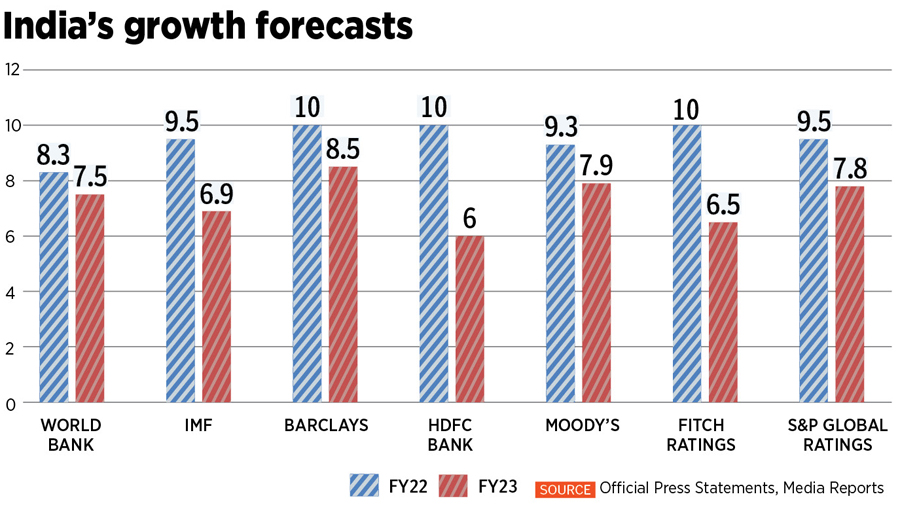 Global growth is expected to grow at 5.6 percent in 2021–its fastest pace in 80 years–but slow to 4.9 percent in 2022, according to IMF estimates released in June. Higher prices and inflation are likely to push central banks across the globe to pull back on stimulus packages through their accommodative monetary policies.
“Central banks will need to tighten but are unlikely to tighten to a point where demand is choked. It is a new world where in a coordinated monetary and fiscal policy, there will be willingness to tolerate slightly elevated inflation,” Barua told Forbes India. Thus a tapering and slowdown in government spending will take place but not at an aggressive level. It may, of course, increase the apprehension in the markets of a rise in the cost of capital, but it will not last long.
Much of the global recovery will depend on the bullishness of the United States’ infrastructure spending plan. Europe will be in a better shape to recover, though the forecast for China’s growth, according to local analysts there, appears to be uncertain, due to regulatory constraints earlier and their growing need to protect state enterprises.
A post-pandemic world will see more localisation of production, which raises risks to regional supply chains. Economists are unsure whether imports of G7 countries to each other will be impacted or whether there will be a strain in linkages between the developed markets and the emerging markets. 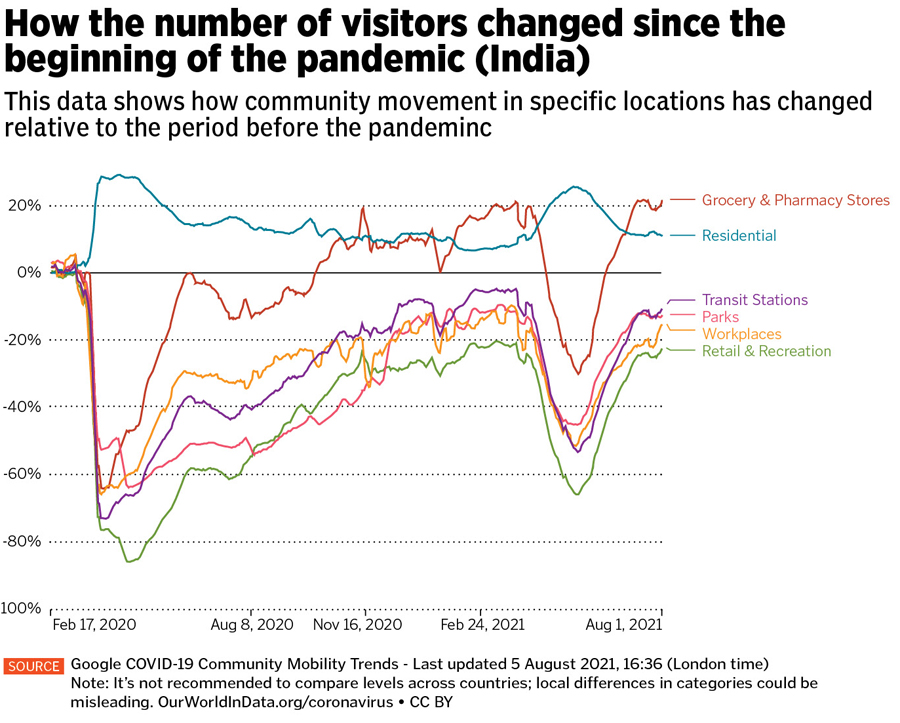 RBI: Path of least regret
By the end of FY22 India could well have met its vaccination targets, with several of the large cities hitting critical vaccination levels. Hospital capacity, one can hope, does not come under pressure even if there is a resurgence in the form of a third wave. There could be multiple booster shots in place for citizens.
As the push towards normalisation of growth continues, we will have to consider the pace at which the government considers fiscal consolidation. “The focus has so far been on monetary policy normalisation, but fiscal policy normalisation is also an interesting risk which remains,” Bajoria told Forbes India.
The RBI in its August 6 policy statement has said that it decided to continue with the accommodative stance “as long as necessary to revive and sustain growth on a durable basis”. “A pre-emptive monetary policy response at this stage may kill the nascent and hesitant recovery that is trying to secure a foothold in extremely difficult conditions,” RBI governor Shaktikanta Das has said.
The RBI will track “the path of least regret", where it will first try to get clarity on all the risks surrounding the pandemic, lockdowns etc., before forming a decision on changing its policy stance.