With the sudden exit of its veteran chief executive and no clarity on RBI's stern intervention, the bank's new business strategy is unclear, say analysts 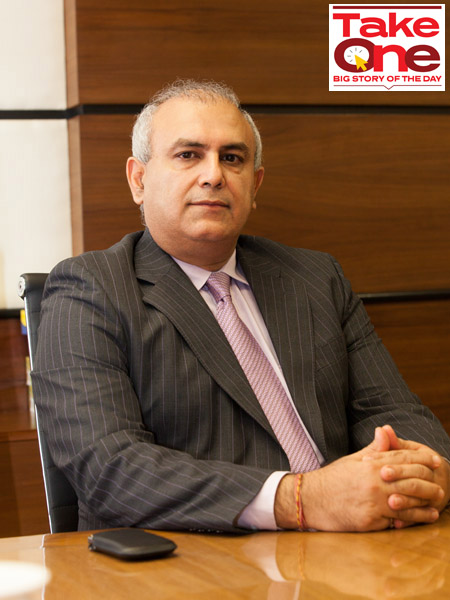 Mid-sized RBL Bank’s interim Managing Director and CEO Rajeev Ahuja on Sunday tried to assuage investor concerns after its long-standing MD and Chief Executive Vishwavir Ahuja suddenly quit his post on Christmas day to proceed on medical leave. His exit from the bank, which coincided with the regulator appointing a serving Reserve Bank of India (RBI) officer on the RBL’s board, has left many questions unanswered.

The sudden management change has not gone down well with investors. The RBL Bank stock slid 19.9 percent on Monday to a 52-week low of Rs 138.35 at the Bombay Stock Exchange (BSE), due to the lack of clarity on Vishwavir Ahuja’s exit.

The RBI rarely takes stringent action over developments that might not threaten the future of a financial institution. It has, after all, in recent years, been proactive in taking action in the cases relating to IL&FS, Yes Bank, PMC Bank, Ujjivan Small Finance Bank, Dhanlaxmi Bank and the erstwhile Lakshmi Vilas Bank, by either appointing new statutory auditors or additional RBI-nominees to the boards of these banks.

The RBI had, in June, already approved a one-year extension in term for Vishwavir Ahuja, against a three-year term to which the bank’s shareholders had given a nod. So what warranted the entry of an RBI-appointed Yogesh Dayal as an additional director on the board of the RBL? And would that trigger Vishwavir Ahuja to leave a bank he nurtured from an old private sector [Ratnakar Bank] to an aggressive, technology-led, retail banking-focussed bank in just 11 years? Seems otherwise.

Was there some issue, which the RBI believed the previous board was not capable of solving? Or was the RBI worried about Ahuja’s leadership? RBL Bank had, like several other private banks, a tough Q2FY22, where its retail banking portfolio had come under pressure. Its profits fell 78 percent year-on-year (see table) and asset quality dipped further to 5.40 percent, in gross non-performing assets.

Analyst Anand Dama from Emkay Research, in a note to clients on December 26, says that the management did not provide satisfactory reasons for the RBI’s appointment of its official as an additional director on the bank’s board and the sudden management rejig. “But we believe that the RBI’s long-term discomfort with the unsecured heavy asset-side construct (MFI and credit cards at 31 percent), creating asset quality risks as seen during Covid and poor compliance with its directives (about risk management/governance/succession) could have possibly led to its swift intervention, apart from ensuring a smooth management transition and comforting the stakeholders.”

In Q2FY22, RBL was hit the most in micro banking, where disbursements slid 62 percent year-on-year to Rs432 crore in the September-ended quarter. It also saw lower collection efficiencies in its micro banking business, which fell to 79 percent in May and 82 percent in June this year, compared to 89 percent through the moratorium in 2020.

RBL Bank has more than a third of its total Rs56,009 crore portfolio in credit cards (Rs12,482 crore) and micro banking (Rs4,959 crore), as of September-ended earnings data. This becomes a high-yielding but high-risk book; a right call on the economy would help boost income for RBL Bank. But an economic downturn would hurt the bank and that is exactly what happened during the crippling second pandemic wave.

No immediate clarity on strategy

The two hurried interactions, first with the media and then with analysts on Sunday, reflected a certain amount of shareholders’ anxiety, which the new chief, Rajeev Ahuja–who was the executive director at the bank–wants to lessen. 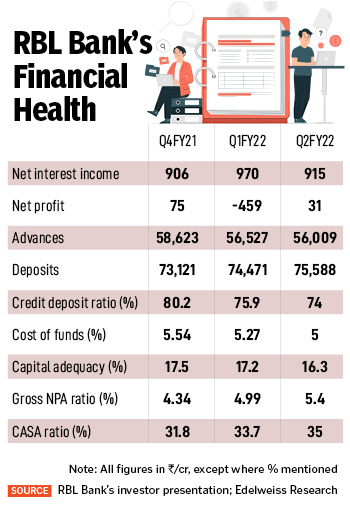 “The RBI is fully behind bank, board and me. I am, with the support of the management, spearheading the bank into its next journey,” Rajeev Ahuja told media persons during his call. “This transition [in leadership] and our strategy has the full support of RBI,” he added. Rajeev Ahuja had been seen by bank insiders as a successor to Vishwavir.

But this sudden leadership change – it comes nearly six months ahead of its time – might trigger a negative sentiment at the stock markets, but only for the near-term. Equities have been in a corrective phase in recent months, down over eight percent from its peak of 62,245 levels in October, hurt by persistent foreign funds sell-off and on fears of the rising Omicron coronavirus variant.

The RBL Bank stock has fallen about a fourth in value to Rs 173 on December 24 at the BSE, compared to Rs 229 year-to-date.

“RBL has been unable to provide clarity on why Vishwavir Ahuja went on leave just a day after the RBI announced the appointment of an additional director to the RBL’s board,” says independent banking expert Hemindra Hazari, who publishes his writings on Singapore-based research platform Smartkarma.

“That the RBI has forcibly appointed a serving RBI officer on the RBL Bank’s board is a cause of significant concern to depositors and shareholders in the light of events at IL&FS, Yes Bank, PMC Bank and the erstwhile Lakshmi Vilas Bank,” Hazari adds.

“There is no clarity on how the strategy of the new leadership will work. So there is little upside for the current equity holder in RBL,” says a banking and NBFC analyst at a reputed research house, declining to be named. But the second analyst clarifies that the RBL situation is nothing like what investors saw in the case of Yes Bank and PMC Bank. “It is not critical at all.”

Rajeev Ahuja expects the December-ended quarter to be better than Q2FY22. “And hopefully Q4 will get us back on track to pre-Covid-19 levels.” Ahuja also said on Sunday that the bank is in no urgent need for additional capital. “We are adequately capitalised with a CRAR of 16.3 percent,” he said. Ahuja is confident that RBL Bank will continue to add about 80 mainline branches each year. The bank currently has 435 branches.

The critical issue for RBL Bank will be to see how the pain points in their business portfolio, relating to credit cards, SME and microfinance lending, improve in coming quarters. The challenge will be to build these in a still challenging business environment.

Dama from Emkay says: “We draw some comfort from the appointment of Rajeev Ahuja (part of the turnaround journey), healthy liquidity buffers/capital ratios (Tier I at 15.5 percent) and management’s strategic intent to change the portfolio mix toward secured assets.” But the research firm has lowered its earnings estimate for RBL Bank by 13 percent for FY23.

Edelweiss Broking, in a post-Q2FY22 RBL Bank earnings note says the MFI and credit cards business were “disproportionately impacted by Covid and contributed to much of the bank’s slippages”. Slippages and consequently credit cost are also expected to halve from the current levels, its analyst Raj Jha says. “Improvement in the macro environment and consequently asset quality, return of growth and further room for decline in cost of funds provide us comfort on RBL’s current valuation,” according to Jha’s note.

The positive for Rajeev Ahuja is that the lingering shadow of his predecessor will not be there. He, like several of the new leaders at both private and public sector banks over the past two-three years, can focus on building his own legacy. ​

Tweets by @forbesindia
Photo of the day: Merry making
Gaurav Kumar and CredAvenue: Lending a helping hand to SMEs