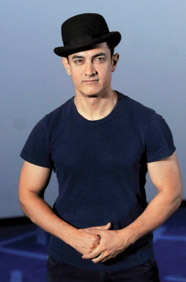 Aamir Khan jumped two ranks in our list riding on the record-breaking hit PK which, at present, is India's highest grossing film of all time, both domestically (net revenues Rs 489 crore) and overseas (Rs 211 crore). Khan also did a voice-over for the character of a dog called Pluto Mehra in Zoya Akhtar's Dil Dhadakne Do. His next movie, a sports drama called Dangal, is slated for release in December 2016. Unlike other stars, Khan continues to be very choosy about his endorsements, usually working with one corporate at a time; at present, it's ecommerce firm Snapdeal.
Fast Fact: He has put on 30 kg for his role as professional wrestler Mahavir Singh Phogat in Dangal.