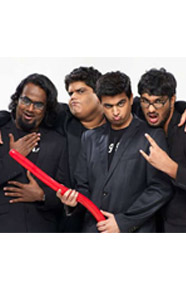 All India Bakchod (AIB)
At a Glance
Forbes India Lists

AIB began as a podcast by Khamba and Bhat and evolved into a no-holds barred comedy collective with Joshi and Shakya, making a following for itself on YouTube. 2014-15 was a break-out year. Their videos made newspaper headlines and were discussed on national TV news, particularly their celebrity roast of Ranveer Singh and Arjun Kapoor. Towards the end of the period this listing considers, they signed to produce their own TV show. The pay cheques will have started coming in once the shows are on air, so will probably double their income by next year's list.
Fast Fact: AIB has started an advertising agency, Vigyapanti, which released its first video ad in early October.