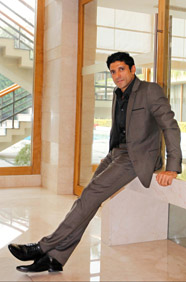 Farhan Akhtar had a forgettable year with only sister Zoya Akhtar's Dil Dhadakne Do bringing in good tidings. He co-produced a film Bangistan that failed miserably at the box office garnering only Rs 5.5 crore. Despite the poor showing at the box office, Akhtar has managed to remain in the 2015 Forbes India Celebrity 100 List primarily because of his various endorsements. Akhtar ended 2015 on a high note after being signed on as the brand ambassador for Chivas Regal. He can hope to play catch-up next year with Bejoy Nambiar's Wazir and Shujaat Saudagar's musical Rock On!! 2.
Fast Fact: Farhan Akhtar has launched a social campaign called Men Against Rape and Discrimination (MARD) and is vocal about women's rights.