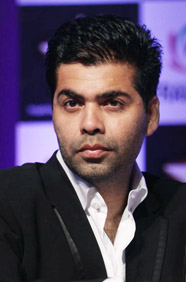 Karan Johar is among the few celebrities who have been able to strike a balance between their Bollywood and television commitments. In the last one year, Johar has judged reality shows such as India's Got Talent (Season 6) and Jhalak Dikhhla Jaa Reloaded and also acted in Anurag Kashyap's Bombay Velvet alongside Ranbir Kapoor and Anushka Sharma. While the film itself didn't do well, Johar's performance as a mustachioed villain was widely appreciated. Meanwhile, Johar also produced movies like Humpty Sharma Ki Dulhania, Ungli and Brothers and has big projects like Shuddhi and Ram Lakhan lined up for the next year.
Fast Fact: At Twinkle Khanna's book launch, Karan Johar hosted a roast version of Koffee with Karan with Twinkle as his special guest.