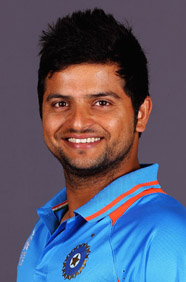 The left-handed, middle-order batsman has always been at sea in the longer format of the game. Raina made a comeback to the Test team after three years but ended up scoring a pair against Australia in the only Test that he played in 2015. He was subsequently dropped from the team. He, however, remains one of the most impactful players in one-day internationals and Twenty20 games. He is the first batsman to score 3,000 runs in the Indian Premier League.
Fast Fact: Suresh Raina is fond of singing and has lent his voice for a song in the Hindi film Meeruthiya Gangsters.